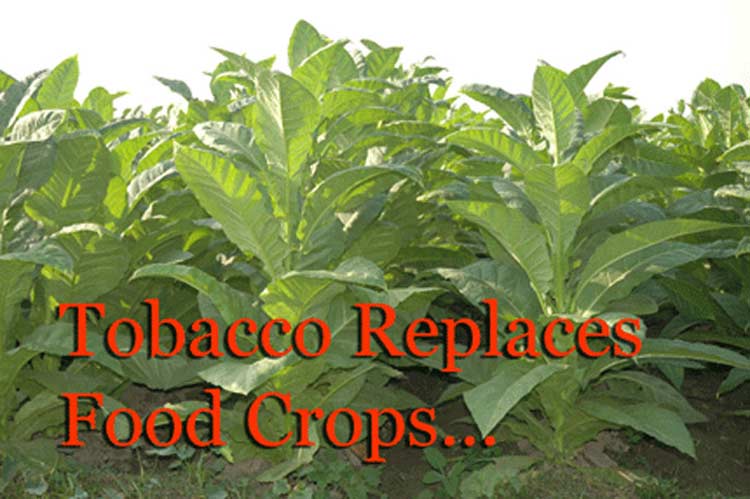 Say 'No' To Tobacco Cultivation

Kushtia. 30 March. A farmers' meeting in village Boro Gangdia (Union Khalisha Kundi) of Daulatpur upazilla on 30 March, 2010 expressed grave concern over the aggrssive extnsion of tobacco production in the district of Kushtia, threatening serious crisis in food and destruction of environment, ecology, bodiversity and livelihood of local communities.  The meeting was organized by UBINIG with participation of farmers, NGO, journalists, college teachers and local government leaders. The Chief Guest was Afazuddin Ahmed Member of Parliament, special guest was Hares uddin, Upazilla Chairman and chairperson was Farida Akhter, Executive Director of UBINIG. Farmers and rserchers presented facts and figures arguing that unless government take immediate policy decison to curb the spread of tobacco cultivation soon Bangladesh will face food and livelihood crisis which wll be dificult to tackle. It is important to note that tobacco companies usually target the most fertile land of the country for quality leaves.

The two upazillas where tobacco cultivation was intensified were Daulatpur and Mirpur involving 37,246 hectares i.e. 91% of the land under tobacco cultivation in Kushtia district. The number of tobacco farmers in Daulatpur is 20,000 and in Mirpur are 54,000. These farmers are working under contract farming or sub-contracted by the contract farmers. 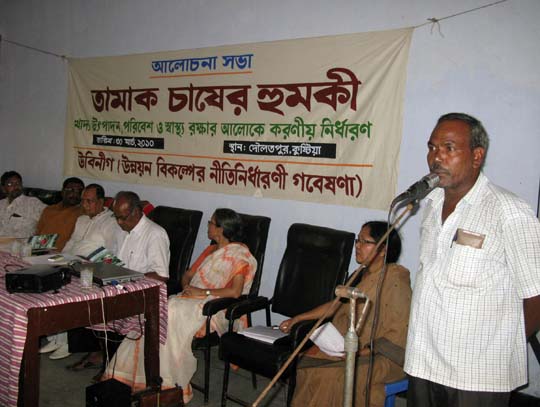 Aminul Islam Gayen of Doulotpur Kushtia speaking on behalf of the farmers and the local community. Despite the fact that the hazards of tobacco cultivation are being raised by the farmers as well as th elocal community, government failed to come up with a land use policy that could ensure food availability and secure livlihood of he epeople.

Kushtia Tobacco production organized by the Tobacco companies competes directly with food production. Kushtia, the largest tobacco-producing district in the country, was at one time a food surplus region with very fertile agricultural lands. Tobacco is now occupying the best lands available in the district, displacing crops such as pulses, sugar cane, jute and vegetables. The total agricultural cultivable land in Kushtia is 1,14,979 hectares. During the year 2009 - 2010 the land brought under tobacco cultivation was 41,000 hectares, which is 36% of the cultivable land. This was done because of the active promotion of the tobacco companies promising them high prices for the leaves and giving fertilizers and other inputs as incentive. The tobacco farmers allured by such promises increased tobacco cultivation. In 2008- 2009, tobacco cultivation was much less was cultivated in 10,930 hectares of cultivable land. So the increase of land under tobacco cultivation during 2009 - 2010 was three times. The tobacco companies promised Tk. 115 per kg (1.70 USD) for tobacco cured leaves. In 2008 - 2009, because the farmers cultivated less tobacco therefore they could sell at Tk. 140 per kg (USD 2) irrespective of grade. In fact, the year before 2007 - 2008 the tobacco leaves were sold at Tk. 70 - Tk. 80 (USD 1) per kg. 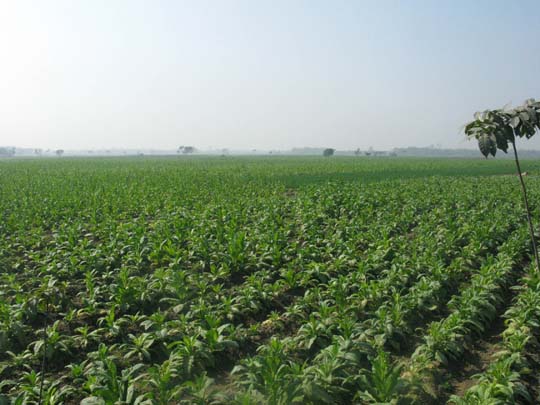 According the newspaper report (Amar Desh) during the year 2008-2009 there was surplus food crop production by 74,000 metric ton, whereas in 2009 - 2010 this will be much less, as more land has been taken out of food production and brought under tobacco cultivation.

This year (2009 - 2010) when the farmers brought huge amount of land under tobacco cultivation, the companies are giving Tk. 60 - Tk 75 per kg (a difference of Tk. 55 per kg) to the farmers. The farmers are outraged by this breaking of promise by the companies and have suffered huge loss because large amount of investment has already been made in the cultivation. Out of anger, the tobacco farmers have made effigies of the companies holding Lamp in hand and bamboo in their back to show that the farmers will not allow the companies in their villages anymore

The emphasis was mainly on how it is justified to use the food crop land to be brought under tobacco cultivation? Besides causing environmental and human health disasters, tobacco cultivation is becoming a major cause of food scarcity in the area. Farmer Aminul Islam Gain has stopped tobacco farming for some years. This year he cultivated mustard, pulses (masur), potato and other winter vegetables. The price of food crops has increased (masur Tk. 300 per maund without least cost needed to produce) while the farmers cultivating tobacco is exploited by the companies with unilateral control by the companies on the price. The cost of production of tobacco is very high, but on the contrary the cost of winter crops such as mustard and pulses, is very low.

Sheuly Begum a woman farmer said, the tobacco farmers claim that they get a big cash amount by selling tobacco, which is a great incentive for them. But this money is spent for treatment. For example a labour earning Tk. 3000 as wage by working during the tobacco season spends more than Tk. 2500 for treatment. Over 95% of all family members engaged in various works fell sick after the harvesting of tobacco. She referred to a farmer who attempted to commit suicide because he got 50% less price for the leaves. 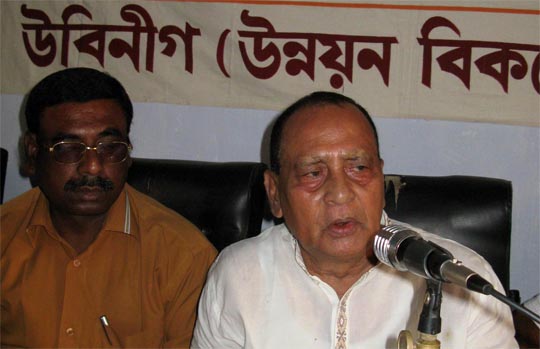 The Chief Guest Member of Parliament, Mr. Afazuddin Ahmed said "It is really a matter of great concern that so much land has been brought under tobacco cultivation this year. Tobacco does not bring profit rather it has become a cause of misery of the farmers. He called upon farmers to cultivate vegetables, pulses, mustard and other food crops instead of tobacco. He declared that "No agricultural subsidy or facilities will be provided to any of the tobacco farmers. Tobacco farming requires very hard labour, but we can get food with much less physical labour." He said, "I know that it is difficult to stop tobacco cultivation totally, but it should be limited to only few areas but no land suitable for food will be allowed for cultivation of tobacco."

In Kushtia, many years of tobacco production has led to the narrowed base of plant genetic resources available to farmers. Access to appropriate seed for alternative food cropping systems is highly constrained, and farmer-based seed systems have virtually disappeared. The speakers at the meeting urged that UBINIG should take active measures to link the Agricultural Extension department to help farmers get out of tobacco cultivation.