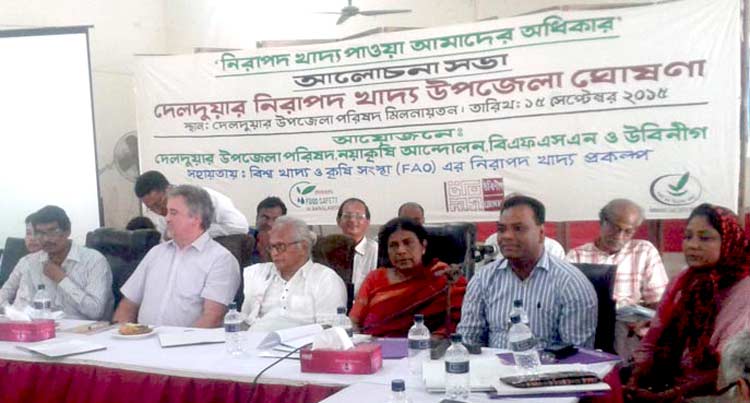 Discussion meeting to to declare Delduar as a Safe Food Upazila was held in the Auditorium of Delduar Upazila Parishad on 15 September, 2015. The event was organized by UBINIG on behalf of Bangladesh Food Safety Network (BFSN) with the support from Food and Agriculture Organization–Food Safety Project (FAO-FSP). There were 98 participants including 24 women and 74 men attending the discussion meeting.

The discussion meeting started with recitation from the holy Quran by Md. Emdadul Huque, the Principal, Lauhati Alim Madrasha; recitation from the holy Gita, by Dr. Shushanto Das, Upazila Livestock Officer. Introductory session proceeded with self introduction of the participants. The Nayakrishi Farmers presented welcome songs in chorus highlighting the need for safe food. The words of the song were:

Jahangir Alam Jony highlighted the role of BFSN in terms of Food Safety. He said, BFSN started its activity in 2010 through a national seminar, attended by representatives from 58 districts and recommended implementation of activities ensuring food safety. Five non-government organizations including CAB, UBINIG, SHISUK, B Safe Foundation and Hunger Free World united to form a network of BFSN.

The BFSN have been working for creating awareness and education on food safety with the support from FAO – FSP project. One of the events of that project, Divisional Meeting for Food Safety was held at Tangail. In that meeting S.M. Ferdous, Upazila Chairman, Delduar proposed for declaring “Delduar as a Safe Food Upazila". Inspired by the Upazilla Chairman's declaration, commitment and leadership UBINIG and Delduar Upazila Parishod have been working for declaration of Delduar Upazila as a safe food upazila. The present meeting is the continuation of that declaration and this discussion meeting is important for achieving Delduar as safe food upazila.

Farida Akhter, Executive Director, UBINIG presented concept and perspectives of "Delduar as a Safe Food Upazila”. The prospect of declaring Delduar as a safe food upazila is bright. There are 166 villages in eight unions of Delduar Upazila. Based on proposal of SM Ferdous Ahmed, Upazila Chairman, Delduar, in the Divisional workshop, collaborative work of UBINIG and FAO-FSP was initiated to that end. Delduar may emerge as a role model for safe food upazila. Commonly it is mentioned that Bangladesh has recently achieved food security. Food sovereignty is more important. Food security simply refers to communities with access to food and does not stipulate what types of food is offered or whether or not the food is local or imported. It also does not require the involvement of the people. On the other hand food sovereignty is very specific. It is the right of the community to produce their own foo and their sovereigng pwnership, control and command over seeds and production method to ensure safe, healthy and nutritious food. Food Sovereignty puts ownership of food system in the hands of the local people. It involves a dependable supply system owned by the people. She said we take food to live and live a healthy life. In the program for growing more rice for food security, pesticides, chemical fertilizers, arsenic contaminated ground water have been used. Consequently food has become contaminated with poison. What do we understand by safe food? From field to table the food is free from all sorts of undesirable elements and processes. Food is produced in environment friendly condition and served in clean environment. There are weekly markets in eight unions of Delduar upazila. Crops raised by the farmers are directly sold in these markets. The prepared and processed foods are also sold in these markets. Rice, pulse, and khichuri are sold here. Sweetmeat shops are there in the open space. Whether these foods are safe or not, need to be checked. Children take potato chips and biscuits packed in polythene bag. We are not sure about the quality of chatpati, fuska, sarbot, etc served in the streets. In the winter season chitai pitha, vapa pitha and many other rice cakes are sold in the street. Pineapple is commercially grown in Tangail. Hormones and other chemicals are sprayed in pineapple. These may not be safe for human health. Ripening chemicals are applied in tomato for quick marketing. Tannery waste is mixed with poultry feed. These are serious challenges for food safety. However, the Nayakrishi farmers produce food crops without chemical fertilizer and pesticides. Here there are 33,247 Nayakrishi households. Out of them 2628 farmers are able to supply their crops to market.

In the preparatory meeting during 6-7 September, 2015 the farmers proposed 13 recommendations:

Dr. John Ryder, Chief Technical Advisor, FAO -FSP, mentioned that the Food Safety Network (BFSN) had been working in Bangladesh for last two years. He said that he have been coming to Delduar upazila frequently. The first reason of his visit is that SM Ferdous Ahmed, Delduar Upazila Parishad Chairman has expressed his firm commitment for declaring “Delduar as a Safe Food Upazila.” He appreciates Upazila Chairman for his innovative idea. It is also pleasing to know that the legal instrument for food safety, Food Safety Act 2013 was also enacted. He hopes implementation of the Law will definitely help ensuing safe food for the people. This law is important for Bangladesh as well as for the global community. At present number of food items are being exported from Bangladesh. The effort of the Government for ensuring food safety is also praise worthy. This is because inappropriate food is responsible for many diseases. The Ministry of Health and Family Welfare is also making excellent contribution for health sector. Food system including the field, orchard, herd, water bodies to the dining table are set in a pattern for ensuring food safety. The Government makes the standards and looks after the implementation. The Non-Government Organizations (NGOs) work directly with the farmers. In fact, NGOs are the easiest approach to reach the farmers and other stakeholders. Consumer education in food safety is very important. They must be aware of the standards of food they produce, buy and eat. It is not possible to have safe food if the production base is not safe. In this context the Nayakrishi farmers deserve appreciation for their environment friendly base of production. He is happy to mention that the FAO-FSP will support Delduar upazila for ensuring safe food for its people. We shall also enjoy safe food in Dhaka produced in Delduar. He wishes all success for “Delduar as a Safe Food Upazila.”

Farhad Mazhar, Managing Director, UBINIG appreciated Delduar Upazila Parishad and Nayakrishi farmers for their excellent performance in respect of making safe food for the people. It is nice to know that the work of food safety is being continued in Delduar. Delduar is a resourceful place and it has tremendous potentials. He said we have been working with the farmers and the weavers for long time. Here the people are very innovative and smart. There have many success stories in Nayakrishi and weaving in Delduar. We all agree that the event we are initiating today will be remembered with respect in future Delduar will be referred as a model for “food safety”. This is great. The Nayakrishi farmers do not use any pesticide and depend on surface water. There are three steps in food safety: at the production level, at the distribution or marketting levl and in consumption level, in our dietary practices and culture The Nayakrishi farmers do not use any chemical fertilizer and pesticides. This is an advantage to Delduar Upazilla. The Nayakrishi farmers are guided by some ethical standards. We shall not do anything that poisons our lives. Crop production might have increased yield of cereals, in exchange of protein rich crops, oil seeds and others but created condition for non-communicable diseases such as diabetics, cardiovascular diseaaes, arsenicosis, cancer and other ailments. Risk of diabetes has increased. People are facing heart failure. Prevalence of cancer is increasing. Food is charged with arsenic, 70% cancer is caused due to inappropriate food intake. Rural people consumes 40% uncultivated vegetables, which are safe for health. We must work together to make safe food for all of us. The farmers of Delduar will offer safe food for all and at the same time they will improve their economic condition. We appreciate, FAO-FSP for being with us in our mission for ensuring safe food for the people.

Robindra Chakma, Assistant Commissioner (Land) Delduar as Special Guest, mentioned that we shall work together in our commitment for making “Delduar, a Safe Food Upazila.” We will involve the Union Councils, traders, farmers and all other stakeholders on board in our mission for making safe food. The issues like food safety will be addressed in educational institutions including Primary Schools, Secondary Schools, teachers, health and family planning departments. Food Safety must be initiated from the household level. Public awareness for food safety must be extended in all levels.

Dr. Rokeya Khanam, Food Safety Officer, FAO-FSP mentioned that Food Safety activities have been implemented in collaboration with relevant organizations since 2010. In Bangladesh five Non-government organizations are involved with the program. Awareness is being created at the consumers’ level. The food safety chain is quite big, from the farmers on the ground to the consumers at large. There is urgent need of advocacy for creating public perception of food safety. UBINIG has been working with the farmers at Delduar upazila. The base for food production must be cleanliness and safety to make safe food. Definitely Delduar will be a model for safe food. We hope in next three years we will be able to extend the model to other areas.

Anower Hosain, Additional Deputy Commissioner (General) as chief guest, said that all the members of the society including the farmers, fishers, herders, traders, etc will be involved for production and distribution of safe food. We have been able to ensure three meals a day for most of our people. Now we are thinking for food safety. We must also leave behind a safe environment for our next generation.

The event was concluded by S. M. Ferdouse Ahmed, the chair person of the discussion meeting. He said it is pleasing to observe that all the respective government and non government departments are aware and taking the responsibilities for declaring Delduar as a safe food upazila. He appreciated the distinguished participants for their kind presence and contribution in the workshop.