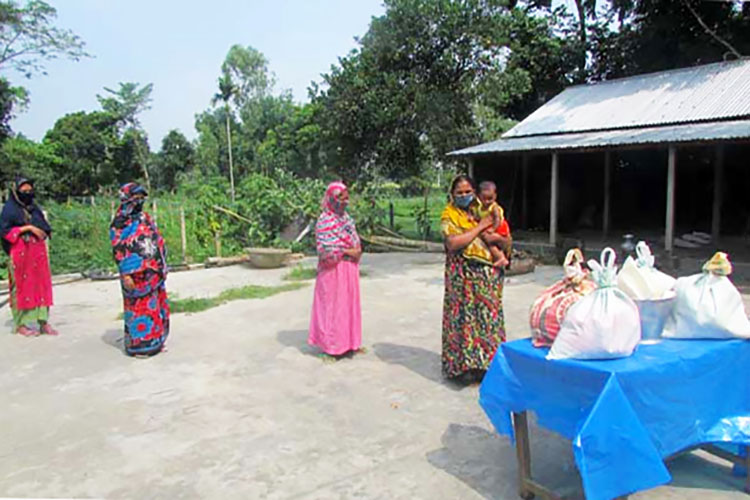 Introduction
Bangladesh is now in the 17th position in terms of COVID positive cases detected so far (22 June) with 115,786 confirmed cases and 1502 deaths [WHO, Bangladesh Situation Report #17]. Since March 8, when first three COVID-19 cases were detected among three expatriate workers who returned Bangladesh, the confirmed cases rose steadily. But since April 5, both the number of positive cases and death from COVID-19 started to increase exponentially, rising from 54 new cases on 7 April to 497 new cases on 26th April. From April 26 to June 26, the number of detected cases shows a steep increase, from 5416 cases to 130,474 cases. Though the rate of testing has now increased compared to the early stages, there is nothing to be complacent about since the overall the scenario is deteriorating rapidly pointing to a grim reality which none of us are ready yet to embrace with. At present, a maximum of 15000 tests are being conducted each day. The number of deaths per day has increased from 5 per day on April 26 to 40 per day on June 26, showing an alarming exponential increase. While the number of confirmed cases for per million populations is 861, number of test conducted for per million populations is only 4561. At present Bangladesh lies in a stage of community transmission, meaning both the numbers of infected and death are going to see a sharp increase. In terms of Covid-19 virus infection, the gender distribution among the infected persons is 68% male and 32% female. The highest affected age group is between 21-50 years (54%), followed by those over 50 years of age (25%). The young children below 10 years are also affected (3%). This shows that the pandemic has taken a heavy toll on that part of the population which is actively employed and constitutes of the bread winners of the families (below 50 years) which projects a grim economic prospect for the country in the coming days.

About 55 out of 64 districts are now grappling with COVID-19 cases in varied proportion. However, Dhaka—the capital city, being a highly densely populated area, topped in terms of highest number of confirmed cases, followed by Narayanganj and Gazipur.

As a preventive measure, the government declared general closure of educational institutions, government and non-government offices on 25 March, 2020 declaring it “General Holiday” without officially calling it Lockdown. Movement of all the transports was suspended. As a result, people became unable to move from one area to the other. The unofficial lockdown was extended several times which ended at last on May 5.

In the first phase of the Lockdown/General holidays, local markets were kept open for a short period of time in the day. As a result, farmers were compelled to sell their crops within this short span of time, often at a price that did not even cover their production costs. Perishable vegetables could not be stored. Though crops like garlic and onion could be stored for some time, but that was not a viable option for the farmers as they badly needed the money. Farmers keeping cows were unable to buy fodders. All the news related to the hardships of the farmers began to surface in the daily newspapers from the last week of March. The daily wage earners had no work as the factories were shut down. Even the domestic helps in the cities were not allowed to come to the houses where they used to work.

As a result of this prolonged lockdown, poor families having pregnant or postpartum women, Dai Mas, weavers, day laborers, etc. were the worst affected ones. As the whole economy almost came to a standstill, these poor people hardly had any resort where they could turn to. UBINIG began to receive pleas for support from the impoverished people in its constituencies.

Since the beginning of the pandemic, UBINIG has been monitoring the situation of the overall country as well as in its constituencies. There was a need for health protection and food support for the families who have lost their sources of income due to the economic gridlock. Unlike other natural disasters, the impact of Covid-19 is going to be felt for a longer period. So UBINIG felt the social responsibility of responding to the needs of the community members with whom they have been working closely for a long time.

UBINIG decided to extend support to the poor people living in the areas of its different centers across the country. Therefore, UBINIG approached its long standing partner Primate’s World Relief and Development Fund (PWRDF) for providing financial assistance to respond to the needs of the affected people.

An urgent meeting was held in this regard on May 30 where it was decided to stand beside these worst-affected people. UBINIG’s request to Primate’s World Relief and Development Fund (PWRDF) for financial assistance was accepted. It was decided that these support materials should be handed within June 2020. A body of five-member central committee was formed [see Annex 1] with a view to monitoring, supervising and coordinating different functions of the whole support program. A detailed work plan was also devised mentioning the specific responsibility of each member of this central committee.

It was difficult to implement the plan as the movement of the transports was suspended and no movement was possible from Dhaka to the centers as well as from the centers to the villages. So a decentralized system was devised while central monitoring and supervising was also ensured simultaneously through on-line WhatsApp group call and phone call. At each center, separate support committee was formed to distribute the support materials among the affected people. At the village level, Nayakrishi leading farmers formed committees at the village level for identifying the needy families and for ensuring proper distribution by maintaining health guidelines particularly the physical distancing principle. At the meeting of the central management committee, 7 groups of vulnerable population were considered eligible for this support program.

Activities of the support distribution

Given the current onslaught of the Covid-19 pandemic, it was very hard to conduct the support program ensuring the health safety measures as it was of prime importance both for the support providers and support recipients to keep themselves safe from the highly contagious virus. During other natural crises, the issue of health safety while conducting support program was hardly cared about. But it is otherwise with the highly communicable Covid-19 pandemic. The members of the support distribution committee had to face challenges in creating the list of eligible support recipients as it was hard to reach villages as well as to deliver the support materials to the recipients in time amid the lockdown. UBINIG central management committee was very careful about the health safety of each and every staff engaged in the support operation amid this pandemic from the very first day of its outbreak. So the central management committee decided to form support distribution committee in different areas of UBINIG centers comprising of Nayakrishi farmers, weavers, and Dai Mas (Traditional birth attendants). These committees were given the tasks of enlisting eligible support recipients in their own working areas, participating in support distribution among them till the end of the support program and helping the central committee with necessary information and/or suggestions.

About 41 farmers, Dai Mas and center staff formed the center-based committee in 4 UBINIG centers and 12 members of the women’s network and readymade garment workers’ representatives helped in the support distribution process. They were engaged in enlisting of the recipients, selecting the food items, supervising the transportation of the support items to the distribution areas and distributing the support items maintaining the health safety measures etc. The names, addresses and contact number of each and every recipient were collected.

Considering the plight of the poor people who were hit the hardest because of the lockdown, UBINIG central management committee took the initiative to stand beside them with support materials containing foods and health protection items. Apart from ensuring the proper enlisting of affected people and the distribution of support materials among them, UBINIG central management committee also chalked out a plan and took necessary initiative so that farmers could be benefitted from the sale of the agricultural products produced by them as well.