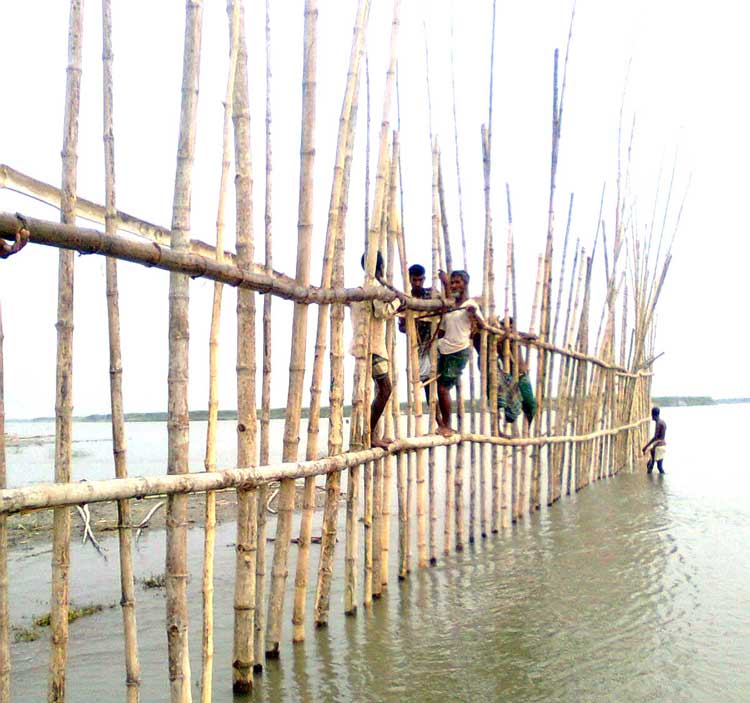 Chatka is made from bamboos to tame river, an effective but simple indigenous innovation of the local community to reduce river erosion that also helps in reclaiming land. The bamboo binding resists soil erosion, turn silt, deposit soil formation and helps accretion of land.

The farmers of Sonatoni union have taken this innovative initiative to check river erosion. Chatka is simple to make, but it works. This is a bamboo binding - an indigenous practice that redirects the water flow of the river.  ‘Chatka’ is the local name and hard to translate.  The important feature of Chatka is that it is a community-based approach. The merit and advantage of the approach is well-known in different Jamuna Chars and Island. The main purpose of this kind of binding is to redirect the water flow of river to protect against river erosion.

Farmers in Sonatoni, a union in Shahjadpur upazila in Sirajgonj district, has been engaged with UBINIG through practicing the biodiversity-based ecological agriculture for last 12 years. The farmers and all other members of the community in the 22 villages declared Sonatoni union as ‘Pesticide free’ union 7 years ago. The ecology, therefore, offers a unique agro-ecosystem that has tremendous contribution to lives and livelihoods of people. However, the community always faces the question of sustainability in the context of river erosion and other related disasters.

Jamuna river offered the island about 200 years ago. But it was again entirely eroded only 60 year before. After the erosion the people of Sonatani were split out in other islands of Jamuna and its' adjacent area. The split out people were blessed by the Jamuna again in late 1980s'. The people started to resettle in Sonatoni and started their livelihood on the char land. But again the direction of Jamuna started to change its’ course in the recent years. The Community became vulnerable again in mid 90s'.

Risks and vulnerabilities of the community

Since last 11 years, the river erosion has been a regular scenario in Sonatoni. The challenges for the community were quite severe. During each monsoon season, the water flow of Jamuna river hits the community. If it is in flood form, the hits are very frequent and severe. The river erosion in every monsoon posed great uncertainty for the community to survive and make plans for future. They did not know if they would be able to harvest the crops they planted, whether they can stay in the house they have built, the school or the mosque will go under water anytime. They were always prepared to shift to another unknown place anytime taking all the moveable belongings such as household items, seeds and the livestock, leaving behind trees and crops they have planted. With tears in their eyes, women leave their houses which are going into the river.

However, the struggling people of Sonatani union have been trying their best with their local knowledge and experience to cope up with this regular disaster. Their local and indigenous knowledge and practical experience has various significant aspects to address the disaster situation and reduce their vulnerability.

Having been deprived from any support from the government, the community felt that redirecting the flow of water by their own knowledge and skill can save the land and the community from erosion. In that context erection of fencing by bamboo, wooden log can change the course of the water flow. With this end in view, as a risk reduction step the community firmly viewed that bamboo binding on the river line will be able to redirect water flow of the Jamuna to protect the community.

UBINIG was involved with Sonatoni union people through Nayakrishi Andolon, the practicing of biodiversity-based ecological agriculture at community level. Based on this relationship the community requested UBINIG to help them from river erosion through making bamboo binding in the river. The community specifically requested for providing raw materials such as bamboo and they committed to contribute their physical labour for the construction of Chatka.  Accordingly, UBINIG approached LI BIRD Nepal for providing financial support for the bamboo binding on account of its' project 'Community Based Biodiversity Management' (CBM) sponsored by Development Fund, Norway. Accordingly the CBM project has supported the community for construction of bamboo binding to redirect the water flow and save the community from river erosion. 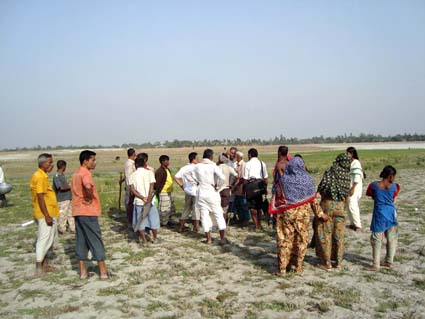 Community people in Sonatoni are engaged in discussion on Chatka

There was no further land erosion in the target areas. Rather at the end of the monsoon it was observed that there was an accretion of about 100 acres of land along the bank of the river. The bamboo binding helped accretion of 150 acres of land and also saved 142 households from river erosion. In the mean time, the raised land was cultivated by the farmers. Sixty nine farmers cultivated black gram, mustard, grass pea and local boro rice in the raised land. 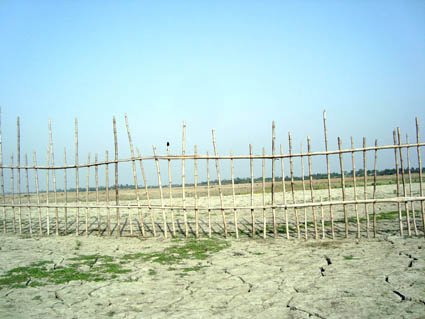 The people were encouraged with the accretion of land along the target areas. They thought that if some more bamboo bindings were constructed on the other side of the village would be saved which was still prone to river erosion. They approached UBINIG again for construction of bamboo binding on that threatened area. Accordingly six segments, each of about 150 feet long, were constructed. At the end of the monsoon in 2011 there was accretion of about 100 acres of land. In March 2012 the farmers have been sowing seeds of fox tail millet, sesame and aman rice as mixed crop in the newly raised land.

The people in the community are very happy and proud for not only checking the river erosion but also for accretion of new land. The farmers are very proud to see that people from different areas come to visit the raised land and the emerging crops. This is a significant achievement of the CBM project for helping the suffering community from river erosion and at the same time offering new land for growing diversified crops. This is a positive contribution for enhancement of agricultural biodiversity. This is another index of community innovation for adaptation to adverse climatic condition.

Bamboo binding has helped siltation and earthling up of the adjoining areas. These raised lands are better suited for uncultivated plants like reeds, Vetivar, nut grass, kasbon etc. These are very good cattle feed as well as soil binder. The farmers are very happy to see the development of vegetation. They feel that these raised areas with more potential for future production.

The community people also feel that due to rise of earth the intensity of flooding will be naturally prevented. They also feel that the bamboo binding have not only saved their land but also gained some new land raised along side our char land. It is helping them to survive, sustain and have some new land’.

The bamboo binding is an appreciation of local knowledge for saving land, biological diversity and community as a whole. The indigenous knowledge of chatka is a low cost technology for saving land and people from river erosion and calamity. This technology deserves extension both at national and international level with due priority.