Farmers are cheated in Bt Brinjal ‘field cultivation’: A failed attempt at the cost of risks to human health and environment 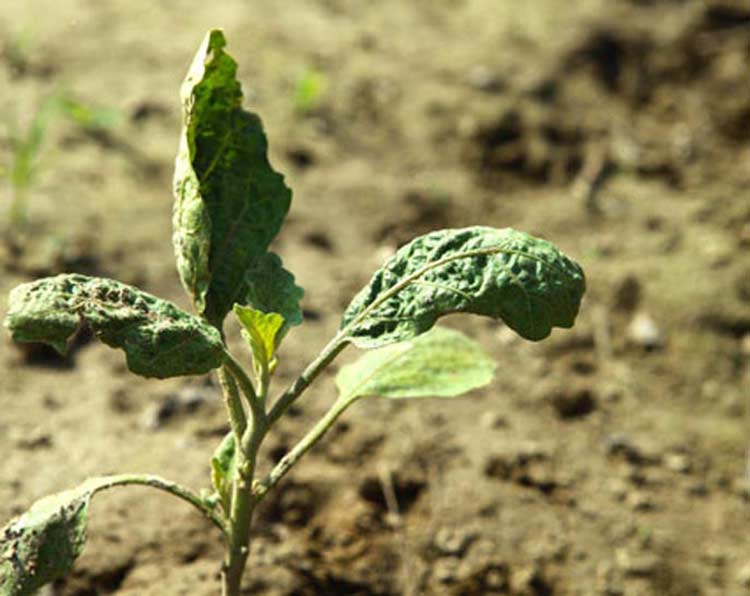 On 22nd January, 2014 twenty farmers from four districts were given the saplings of Bt Brinjal in ceremony organized by Bangladesh Agricultural Research Institute (BARI) at the Bangladesh Agricultural Research Council (BARC). The Agricultural Minister Matia Chowdhury gave out the trays of saplings along with a booklet. The farmers selected by BARI were happy because they thought they were fortunate ones to be chosen for such a ceremonial distribution of saplings. Matia said while addressing as the chief guest, “We have decided to start cultivating Bt brinjal after different necessary tests at home and abroad. We took long time to experiment all pros and cons for introducing the cultivation of this variety. There is no alternative to accept the reality of the GM crops to ensure food security of the people. The government is always alert of any kind of “negative reaction to the public’s health and the environment”. However, there was no sign of taking any precaution for safety of public health and environment at the field level. Even in the meeting there was no representative from Ministry of Environment and Ministry of Health. The special guest was Ms. Janina Jarulski, Mission Director, USAID, Dhaka as the programme was sponsored by ABSP-II, USAID. The ceremony was chaired by Mr. S. M. Nazmul Islam, Secretary, Ministry of Agriculture, GOB, with other important guests such as M. Showkat Ali, Former Advisor to the Caretaker Government (who was also a promoter of biotechnology) Md. Kamaluddin, Executive Chairman, BARC and Md. Rafiqul Islam Mondol, Director General, BARI. The ceremony and its guests show very clearly that it had nothing to do with orienting the farmers that a particular GM crop is given to them which needed special attention against any of its potential hazards. Rather the newspapers supporting such introduction stated that “Bangladesh formally started the cultivation of the country's first genetically modified (GM) crop--Bt Brinjal today (22nd January, 2014). As part of the initiatives, Bangladesh Agricultural Research Institute (BARI) distributed saplings of the new crop among 20 farmers of four regions from 4 areas (Jamalpur, Rangpur, Pabna and Gazipur). Four varieties of Bt Brinjal including Bt Brinjal 1 (Uttara), Bt. Brinjal 2 (Kajla), Bt Brinjal 3 (Nayantara) and Bt. Brinjal 4 (Bari ISD006) were given to farmers in each area. That means all the four varieties are going to be cultivated in all the four areas by four different farmers. [Cultivation of Bt Brinjal begins_Daily Star.htm]

We, the coalition against Bt. brinjal, formed in December 2013 among a group of farmers and environmental groups protesting against the premature approval by the National Committee on Biosafety under Ministry of Environment for limited open field cultivation, monitored the planting of the saplings. We noticed two things. Firstly, the farmers who are given the saplings for cultivation have no idea. There was no such training given as requirement of approval. We also could not understand by talking to the farmers what the farmers were told at the time of distribution of saplings. The booklet given to them explained in a very technical and sophisticated way the methods of planting of seeds and how they should be taken care of. Hardly the farmers seemed to have read it or followed it. The ceremony in Dhaka was for media to show that Bangladesh is well prepared to join a group of 29 countries that grow GM crops as if that is something Bangladesh needs! It is like becoming champion of corruptions. Secondly, any opposition to Bt Brinjal was seen as opposing the ruling party, and particularly the Agricultural Minister Matia Chowdhury. So in the local area, it was the local Awami League Party cadres who reacted to any critical remarks on Bt. Brinjal saying that it is the “child” of the Agricultural Minister. So no opposition allowed. 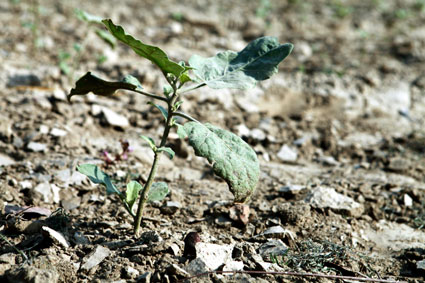 In the first visit to Bharoimari village, I was with Nayakrishi farmers. The plan was to hold a human chain by the farmers to create awareness among the village people about the safety aspects of this Bt. Brinjal which is not just any common brinjal, it is a GMO. The farmer Tarikuzzaman Sumon (35) is a young commercial vegetable farmer. He also runs a shop. Sumon was contacted the day before our visit and he had no objection. On 9th March, when we went there and I wanted to visit the field where Bt. brinjals was cultivated, at first there was no reaction. The Assistant Agricultural Officer Mr. Abdur Rashid was present. He called ‘someone’ and immediately his mood changed and he got very angry. He did not allow Sumon to accompany us to his field, but Agriculture officer took us there in his motor bike. We followed him in our micro-bus. In the motor-bike one UBINIG staff was with him. The officer told him, why you are making so much noise against this. The plants are not performing very well, so what’s the point in resisting against it. He also said, we have to follow the government orders, that’s all.”

I, along with my colleagues and some journalists, saw the field. It was fenced by a synthetic fish-net with a bamboo-gate to enter into the field. The land size was 33 decimal fenced with green fishnet and Bt brinjal saplings are planted. There was no sign board and therefore no way to know which variety was planted. The condition of the plants was not good. Almost over 50% were drying, despite there was watering in the morning. Soil was wet but looked like dry land. On the surroundings of the field there was wheat on one side, sweet gourd on the other and okra on the third side. The front side was open.

The local journalists came and I was talking to them. In the meantime, we got message from the rally point that they were being dismantled by Awami League local leaders and they were saying these plants are given by Matia Chowdhury so there cannot be any opposition to it. Clearly they took a partisan position, although we did not even mention anything about Matia Chowdhury. We were only raising concerns about its safety aspects. Soon our famers came to the field chased by the party people with sticks in their hand. They hit several people and used abusive language against the women farmers. One women farmer complained that she never was insulted in this way before.

Then we talked to one of the leader Wazed who was not willing to listen to us. However, we insisted on talking to him and said that we want to know if they find out that it will be harmful will they stop it. Finally with the mediation of the journalists, it was decided that we will sit down with the local leaders and share our concerns. They promised to provide support in they are convinced. Afterwards, our farmers demanded to hold the rally in front of a nearby school in Dashuria, on the highway of Pabna-Ishwardi.

The news of the attack appeared in several newspapers which led to reaction among the civil society against Bt Brinjal. A group of lawyers, journalists and environmentalists visited the field sites again in Pabna on 31st March, 2014. This time the plants in Sumon’s field looked fresh but the leaves were all curled, affected by pests. Sumon was not available. He closed his shop and went away somewhere, clearly trying to avoid the visitors. They were giving some compost in the field. The plants were too small to have fruit, although the local brinjal plants in the nearby fields have already been harvested few times.

Then we went to the field of farmer Amjad Hossain, in village Bakterpur who is basically a horticulture farmer, commonly known as Peyara (guava) Amzad. He also cultivates Litchi. He did not have any separate land allocated for Bt. Brinjal; those were planted in the Litchi garden. Peyara Amzad knew about the visit of the Coalition members, so he decided not to be at home. However, other farmers came to talk to us. No one has any idea about Bt Brinjal. They only said they were told it will not have fruit and shoot borer pest. But what about the plants? One farmer said, may be the plant will be infested by pest attack only the fruit will be safe from pest.

The seedlings were planted very late only in the second week of March 2014. An overview of the field shows the seedlings were transplanted in line with 75 cm (approx.) spacing between rows and 75 cm between plants in the rows. The plants were 15-27 cm high at the time of visit. As an Agricultural scientist Dr. M. A. Sobhan accompanied the team, he could identify Brinjal plants in both the plots were infested by aphid, white fly and red mite. Most of the leaves of the brinjal plants were curled due to infestation of insects and mite. The Bt. brinjal plot of Shumon Mia was relatively less affected by the insects and mite. But the scale of infestation by insects and mite in the field of Amjad Hossain was such that the plants may not survive up to bearing stage.

Interestingly, while Sumon’s field can have “no pesticide spraying”, Amzad’s field will be sprayed with pesticide because of the litchi garden. How can they save Bt. Brinjal plants from pesticides which are just under the Litchi trees?

In this plot size, if they get proper performance of production then they may get almost 200 kilos of brinjals. With local variety brinjals they usually harvest 2 to 3 times of brinjals per week which means there will be enough for marketing. It is unlikely that farmers are going to consume all they were going to produce. This will have to go for marketing otherwise the farmers will be at loss. What are they going to do with such huge amount of brinjals.

We asked, how these brinjals can be distinguished from the normal varieties? Farmers said, we don’t know.

Bangladeshi soil is rejecting the GM crops, as it is an insult to a country which is so rich in biodiversity and have so many varieties of brinjals. Farmers were cheated by modern agriculture by believing in modern science and adopted HYV package; then it has taken the corporate control of Hybrid seeds and became dependent on fertilizers and pesticides. Now they are given false promise saving from pest attack, and claimed that “usually farmers have to spray pesticides up to 80 times in a cropping season of brinjal against a recommended dose of 25, making the vegetable highly toxic and that Bt gene insertion in brinjal makes it resistant to fruit and shoot borer (FSB) that causes 50 to 70 percent loss of brinjal yield.

But now, the farmers who felt that they were lucky because they were “chosen” for Bt Brinjal are now feeling cheated, yet they cannot talk about it. But farmers like Amzad who is not vegetable grower said, “Why should we bother? We took it because government gave it to us. If it is harmful, why should I care?”