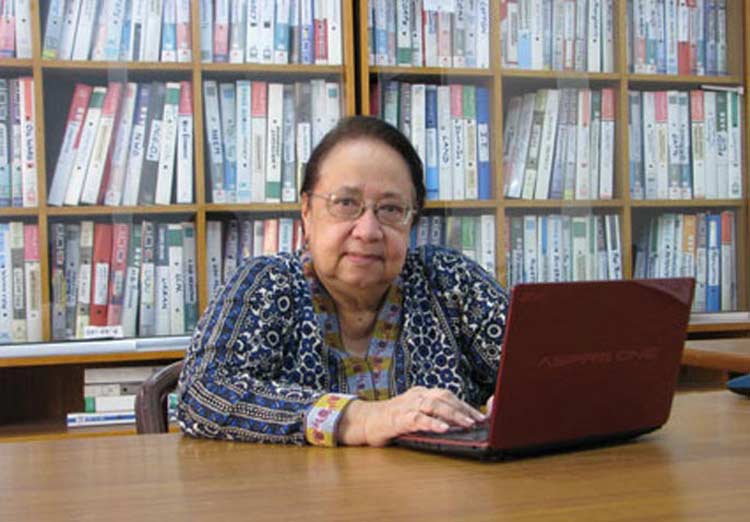 On January 8, 2015, Deneb Sumbul, daughter of Najma Sadeque sent an e-mail in the listserve that Najma Sadeque used to use with the subject “My Najma Sadeque no longer with us” . The mail said, “With the greatest sorrow, this is to inform you that my mother, Najma Sadeque passed away last night around 12:30. She was suffering from kidney failure. In how many ways can I describe my wonderful indomitable mother - she wore so many hats - an activist to the last, journalist for over 35 years, one of the founding members of WAF and someone who had so many interests and never short on wonderful ideas and new perspectives. For me, the pain of losing her is just beyond words. I share with you all one of my favorite pictures of her that I took of her at her office. Please send your love and prayers to her”.

Najma Sadeque was a prominent human rights activist, journalist and environmental writer . She died at the age of 72 in Karachi, Pakistan. As a journalist, she worked with Dawn Group’s eveninger The Star and The News International. But she was also known for activism on women’s rights, leading to her founding the Shirkat Gah with seven other like-minded women in 1975. She was also involved with Women’s Action Forum (WAF). Among many issues she wrote on corporatisation of agriculture and what globalisation means for the landless peasant.

Although she spent her life in Pakistan, she was born in what was then East Pakistan. She studied at the Viqarunnisa Noon School and College in Dhaka she was praised by her schoolteachers for her knack for writing in English. She moved to Karachi following her marriage and joined an advertising company as copywriter. But before that she had also held her first art exhibition in Karachi at the age of 19.

Her daughter Deneb Sumbul is a documentary film-maker. Along with all her work, Najma Sadeque had been editing the English translation of the Quran done by her mother Dr Syeda Fatima Sadeque, a double PhD. Najma Sadeque was hoping to have it published in both Karachi and Dhaka.

Throughout history, superpowers that outstayed their welcome eventually turned unscrupulous trying to hang on. The most recent one in the last century directly shaped and manipulated global institutions forcing most countries into submission. The instruments used were the World Bank/IMF, the World Trade Organization (WTO), and certain divisions under the UN such as World Intellectual Property Organization (WIPO), that between them keep South countries entrapped economically, financially and socially.

Because our education system is so archaic, uninformed and narrow in scope, and corporate media and government being selective of information for their own reasons, people don’t even learn about the primacy of seed to survival, livelihoods, technology and economies.

We’ve had a seed bill since 1976 when no worries existed about gene-tampering. It made citizens sovereign over their seed; the public sector alone was responsible for seed development and registration. Now multinationals like Monsanto, Syngenta and Dupont Pioneer, are doggedly divesting us of our ownership and rights. And enough influence has been bought or acquired over the last decade to make that possible.

In 2003, Pakistan drafted an amendment, not in the public interest, but that of multinational seed corporations to manipulate and compromise our indigenous seeds and patent them as their own. In 2004, India acted similarly, but continues resisting. Around the same time, President Bush began pushing hard for GM seeds entry into South countries. Coincidence? Not at all. It was all according to master plan integrating USA’s hegemonic with corporate interests. It was repeatedly blocked by outraged protests worldwide of peasants, farmers associations, other stakeholders and informed civil society who were never consulted.

The issue has again re-emerged in Pakistan as the Seed Bill 2014, awaiting federal approval – despite the 18th amendment that made agriculture a provincial subject.

Whichever grain we eat is also reproducible seed in itself. It’s easy to contaminate natural seeds by donating or exporting GM seeds to a country, mingling it with local seeds before wide distribution. This makes it easier for corporations to claim payments or ‘damages compensation’ for subsequent crops and re-use” of supposedly patented seed.

The modus operandi of takeover was carefully planned to the last detail complete with dirty tricks of the trade, by professional global consultants specializing in financial, economic, and valuation services – the multi-billion dollar Arthur Andersen Consulting Group, the same that faced court when convicted for obstructing justice by shredding explosive documents concerning their notorious client, Enron Corp, in 2002.

But long before this happened, an Anderson Group representative revealed at a 1999 biotech industry conference how they made the Monsanto plan. Anderson’s asked the corporation for its objectives in the next 15-20 years. Monsanto’s dream was a world in which 100 percent of all commercial seeds were genetically modified and patented… by Monsanto! In other words, a world in which most natural seeds were extinct or out of reach of government and ordinary citizens, making the entire world dependent on Monsanto and its ilk, to be able to eat. It was no conspiracy theory as often alleged. It’s a matter of historical record, documented by many, but skimmed over by ignorant or self-serving politicians, and suppressed by the US corporate media.

Anderson provided Monsanto with a step-by-step blueprint. To gain maximum outreach and muscle, Monsanto bought up seed companies from all over North America and elsewhere, picking up almost 25% of the world’s seed companies.

But key to the master plan was the influencing of target governments — politicians, technocrats, and journalists. That was easy. All it took was lavish wining and dining, foreign junkets and other off-the-record rewards. Virtually all our agricultural scientists and institutions seem to have converted into blind followers of the genetically modified, without ever having done any worthy research, development or comparative studies with traditional indigenous agriculture.

Consequently, most agricultural scientists sound like they’ve always been in Monsanto’s service rather than government, unabashed by being displayed on Monsanto’s website. They facilitated GM (Bt) cotton, whether actively or by turning a blind eye, to miraculously dominate 80% of Pakistan’s cotton fields. Officialdom never turned a hair nor conducted an investigation.

The idea was to flood the market and farmfields with spurious, imported or unofficially or officially-released seed, so that people are overwhelmed and helpless to correct the situation, giving up instead. The coast is then clear for formal corporate takeover of a country’s seeds.

Another biotech company at the conference confidently displayed projections of the global decrease of natural seeds due to GM intervention, predicting that within 5 years, 95% of all seeds would be genetically modified (the remaining 5% natural seed would still be required from which to source fresh genes, since man cannot create new genes or life forms, only change its appearance or composition). The projections were not too far off the mark with the highest-selling commercial crops.

However, not everything went according to plan. While many governments including USA were corrupted and most of the world’s farmsoils were seriously damaged within a couple of decades — citizens did not take it lying down, and some governments (not ours) began to fight back. Today, increasingly, Americans want nothing to do with Monsanto, which is why it started seeking greener pastures abroad. Most of Europe now rejects GM. So does Africa where Monsanto in league with USAID sought to contaminate local seed, by entering in the guise of food aid. Other countries are joining the ranks.

Most of our agri-scientists have never had farmers’ hands-on experience of the natural world and traditional knowledge, let alone having comprehended their day-to-day lives in social and livelihood contexts. Corporate-conditioned views resist regulation and testing of imported seeds for risk of foreign crop pests and infestations. Corporate claims are unquestioningly accepted as final unalloyed truth. Our Department of Plant Protection and Quarantine is so dated and deficient in equipment and technical skills, anything can slip easily through our borders.

We have no Biosafety laws in Pakistan. The National Biosafety Centre (NBC) that came under the Ministry of Climate Change no longer exists. There’s no entity to deal with risk assessment and evaluation of GMOs. And yet the government feels competent to push through a seed bill that will allow public research institutes – owned by Pakistani citizens — to be handed over to multinationals complete with intellectual property rights over basic, indigenous seeds, for them to superficially tinker, patent and brand-name as their own.

If ‘Naya’ Pakistanis are serious about ending corruption and bringing justice and a better life to the masses, they’ll have to salvage agriculture and indigenous seed instead of just looking for embezzled finances. Currently, the governing sinking ship is simply trying to stay afloat long enough to sell off what’s left of Pakistan’s sovereign assets – such as OGDCL – before fleeing abroad.