Third round of Bt Brinjal: farmers are not interested 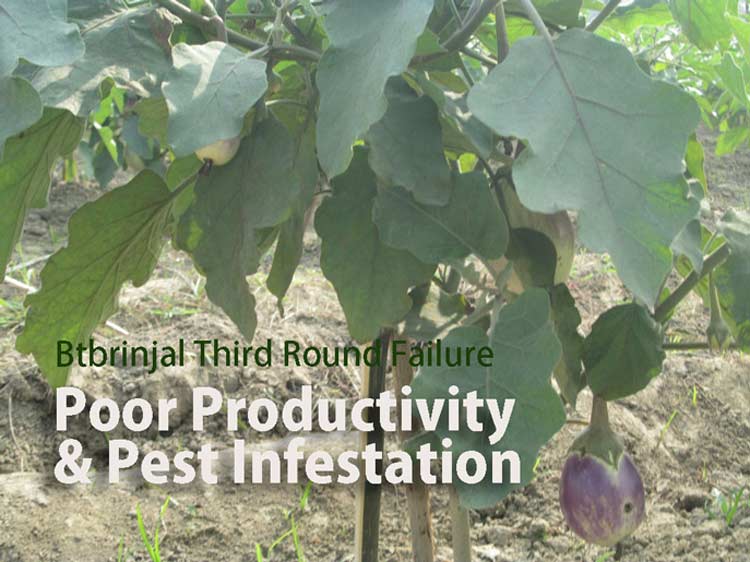 Bt Brinjal, the genetically modified brinjal introduced in Bangladesh despite concerns and failures in performances, is imposed again for the third round with newer farmers during 2015 – 2016 winter crop season. No report has been published as research findings of the first two rounds of field cultivation except some propaganda news. The website (both Bengali and English page) of Bangladesh Agricultural Research Institute (BARI) has no information. It only says Bt Begun (Bt Brinjal). That’s all. The page is just blank. Even International Service for the Acquisition for Agri-Biotech Applications (ISAAA) did not publish any report after its Brief 47: The Status of Commercialized Bt Brinjal in Bangladesh, in 2014. There is nothing in 2015 which could have reported about the the so-called 'success' of the second round field cultivation. In the second round Bt brinjals seedlings were given 108 farmers, of which 79 farmers were interviewed by UBINIG and were found to have massive failures. [see http://ubinig.org/index.php/campaigndetails/showAerticle/13/30/english]

‘Bt. Brinjal is under Life Support’; it is going to die as soon as the machine is plugged off; yet BARI continued with its plan to increased field trials with 200 farmers and with two other Bt Brinjal varieties. The five varieties are Sing Nath, Chega, Islampuri, Dohazari and Khotkhotia. Of these, Sing Nath, Dohazari and Khotkhotia were released in 2015. http://old.thefinancialexpress-bd.com/2015/07/29/101915

Interestingly in the third round of field cultivation, farmers from second round are hardly included. If it was successful then there would have been a demand from the farmers as well as from BARI and Department of Agricultural Extension (DAE) to continue with the same farmers who have gained some knowledge and experiences and establish the ‘success’. In January 2016, UBINIG contacted 40 farmers in 9 districts and found out that 37 farmers were neither contacted by DAE or BARI nor they themselves were interested to cultivate. The reasons were massive failures in the previous field cultivation. Three farmers 3 in districts have cultivated in smaller size plots at the request of the authorities. However, the entire management of cultivation was done by officials, not the farmers. The same old story.

In Pabna, a showcase farmer popularly known as Peyara Amzad (because he is basically a guava producing farmer) is the only one who has received in all three rounds. In the third round he is given two Bt brinjal varieties Bt Brinjal 2 and Bt Brinjal 4. He has used 66 decimal of land under the close supervision of Agricultural Extension officers in Ishwardi. The fruits are yet to come. In few plants one or two brinjals are showing up but also has pest attacks on the fruit (see the photo above). In Joypurhat, Hamidul is given Bt. brinjal 6 and bt. brinjal 4, which he cultivated in 20 decimal land. In Dinajpur farmer Anwar Hossain has cultivated Bt brinjal, but does not know which one. He only knows it is given by the Agriculture office. He is still waiting for the fruits. In Kushtia, the Agricultural Department did not contact any of the five previous season farmers, but gave seedlings to 5 new farmers in Saharbati village in Gangni Upazilla under the direct supervision of the BARI officials.

Two farmers in Pabna reported that they were told that they could keep the seeds; accordingly they saved some seeds from the Bt brinjals in the second round. However, it was eaten by rats, so they could not try it this time. Most farmers of the second round cultivated local brinjals and are happy with the productivity. They do not need any pesticide application in these local varieties.

Farmers of Rangpur were unhappy with the failure of the crop in the second round. However, farmer Shafiqul Islam waited for the DAE to contact him and if they gave him the expenses then he would have tried again. But the DAE did not contact him. Farmer Matiar Rahman said, if they have self-respect they would not promote Bt Brinjal again. On the other hand, farmer Sakhawat Hossain cultivated a local variety called Shoila brinjal and is expecting to have 5.5 tons from 33 decimal of land. In Bogra, farmer Abdul Matin had incurred loss last season with Bt brinjal, so he cultivated a high yield variety Irri brinjal. He has already harvested 74 kilos of brinjal from the field. More is expected.

In Gaibandha district, farmer Ibne Saud was asked by the DAE to cultivate Bt Brinjal, but he did not agree. Instead he cultivated Chaitali brinjal and chili in his 33 decimal land.

In Gaibandha, another farmer Sakhawat did not cultivate Bt Brinjal because he could not sell the brinjals in the market. It became hard at one point, did not look like edible. Similar problem was raised by three farmers in Rajshahi. They said this brinjal does not have any market. It cannot be sent outside their area because the quality got worse.

Farmer Sumon Ahmed in Rajshahi reported that he was given 100 kilos of Late blight resistant Potato seeds by the ‘authorities’. So he did not cultivate Bt brinjal.

While the failures of Bt brinjal are continuing, the authorities are introducing GM crops one after the other. The latest addition to the list is GM Potato introduced as Blight resistant potato. BARI initiated this GM Crop in the current season as a 'regulatory trial' - the last requisite prior to seeking varietal approval. Breeders involved in developing the GM potato since 2006 at BARI said the RB gene was taken from wild potato varieties and was infused into a potato variety called Katahdin in the United States. They said it was crossed with Diamant and Cardinal -- two popular potato varieties in Bangladesh [ http://www.thedailystar.net/frontpage/potato-freed-deadly-disease-209158] . This is called the second GM vegetable crop after Bt Brinjal.

The two very important crops brinjal and potato are mass consumed and produced vegetables for the common people of the country. Yet, despite failures, lack of scientific validity and acceptability at the farmers level, the ABSPII project through BARI is playing games with the lives and livelihood of the people of this country. If they are so sure that it is good and they are saving the crops from pests (not from pesticides) then please label the crops.