Bt Brinjal: Put a label on it 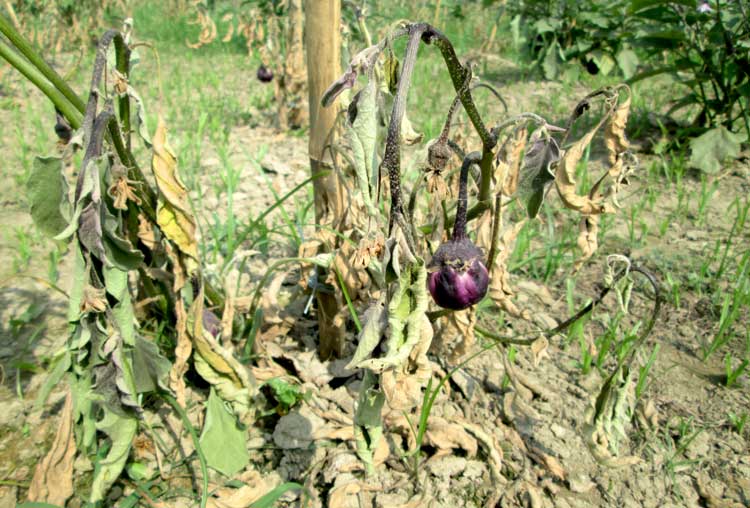 Consumers have the right to know what they are buying

The field cultivation of genetically modified brinjal (also known as Bt Brinjal) was conditional. In October 2013, the National Committee on Biosafety (NCB) imposed seven conditions to be followed in field cultivation. One of these conditions was labeling -- if Bt Brinjal is brought to the market, they must be labelled, ie it should be clearly stated if it is GMO.

Since 2014, two rounds of cultivation showed very poor performance, and the brinjals which were brought to the market were not labelled. Consumers did not know what they were buying.

This is indeed a violation of the conditions of approval. Bangladesh Agricultural Research Institute (BARI) always refused to label them, insisting that it was impossible. In that case, they should not have gone for field cultivation, as they were unable to prevent bio-pollution and protect human health.

This can also be seen as a self-admission of BARI’s incompetence regarding the handling of GMOs.

A report was recently published in the Dhaka Tribune, where BARI Director General Dr Rafiqul Islam Mondol repeated the same position, saying: “It would not be possible to ensure labelling at the retail level.” However, there seems to be something of a positive shift in position when it comes to labelling.

Dr Mondol has now agreed to labelling the sacks. He said: “When the crops enter the market, the sacks will be labelled as poison-free GM brinjal.”

Unfortunately, this is not labelling, it is advertisement with false information being used to attract consumers.

To label the sacks as “poison-free GM brinjal” is misguiding. In the case of GM crops, labelling has been a demand so that consumers can distinguish GM crops from normal crops.

Not only that, since it is a food crop, Bangladesh, as a member of the Codex Alimentarius Commission should follow the guidelines and principles outlined in 2003 for genetically-modified foods.

We know that big GM food manufacturers do not want labelling, as they have realised that growing numbers of people are opposed to GM food products.

It is unlikely that public opinion will change soon because more and more of the hazards of GM crops are being revealed through scientific research.

Global food policy research conducted by the Centre for Food Safety (CFS) confirms that 64 countries, including member nations of the EU, Russia, China, Brazil, Australia, Turkey, and South Africa require standards of mandatory GE food labelling. Labelling enforces the consumer’s right to know about genetically-engineered food that is introduced in any country.

Monsanto clearly opposes labelling. It says: “We oppose current initiatives to mandate the labelling of ingredients developed from GM seeds in the absence of any demonstrated risks.

Such mandatory labelling could imply that food products containing these ingredients are somehow inferior to their conventional or organic counterparts.”

Labelling GM crops as a consumer right is an international demand, and it is followed in many countries as mandatory or voluntary.

But bio-tech companies believe that if they label the products, consumers may not choose to eat them because of their potential health hazards.

But if the government, or any company, believes that it is safe, why can they not label it?

Bt Brinjal is presented as a new introduction to save brinjals from fruit and shoot borer insects, although the promoters have no contribution in developing the variety; they belong to the farmers of Bangladesh. GMO promoters have, in fact, taken nine very popular varieties from six locations of the country to insert the gene of a soil bacteria using proprietary technology.

In this way, the GM company has actually taken over intellectual property rights of nine local variety brinjals, of which they could “unsuccessfully” cultivate six varieties while the remaining three are to be released soon.

But BARI has failed to publish any of their findings to prove that Bt Brinjal is safe, and that concerns expressed by environmental and farmers’ groups are not true.

BARI DG told Dhaka Tribune that they have conducted toxin tests at a laboratory in the UK, and did not find any harmful elements. Where is the reference of this report? Is this even an objective test free from any influence of the promoters?

The Bangladeshi people have the right to know the roots of such findings. The BARI webpage on Bt Brinjal has no information.

Consumers should be able to tell whether they are buying GMO or non-GMO products. Simple as that.

If a crop is “poison free,” then Dr Mondol must test it to make sure that they are free from all hazardous poisons classified by the WHO. Declaring Bt Brinjal “poison-free” is a sneaky way of advertising to promote Bt Brinjal. Ironically, Bt Brinjals cultivated so far have not been done so without the use of pesticides.

An UBINIG report shows 35 types of pesticides, including acaricide (kills ticks and mites), insecticide, and fungicide, were sprayed several times in the Bt Brinjal fields under the direction of the supervising officials.

BARI scientists and the Department of Agricultural Extension have also provided the pesticides to the farmers. How can BARI be in any position to claim that Bt Brinjal is poison free?

Labelling on the sacks with the message that it is “poison-free,” as suggested by BARI, is sheer deception. It is, in fact, totally unethical and falsely assuring consumers that this product is safe. Once the Bt Brinjals are out of the sack, how will consumers know which is which?

Labelling is about information, it is not a safety advertisement, nor should it be an alarm. It is to ensure the rights of the consumers, and for farmers to follow the conditions of approval.