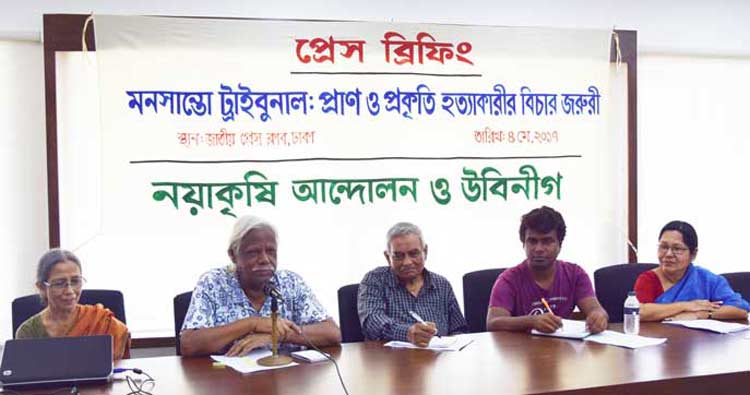 “Our environment is poisoned, our food is poisoned. We must act collectively against the corporate crimes”, speakers at the Press Briefing on Monsanto Tribunal stressed. The briefing was held on 4 May, 2017 at the National Press Club, Dhaka. The Press Briefing was organised by UBINIG and Nayakrishi Andolon to share the Legal Opinion delivered by Judges of Monsanto Tribunal.  In this Tribunal, a testimony was presented by Farida Akhter of UBINIG on Bt Brinjal, a Monsanto-Mahyco initiative imposed on the farmers through Bangladesh Agricultural Research Institute (BARI). The Press Briefing was chaired by Dr. Zafrullah Chowdhury. Delwar Jahan of Prakritik Krishi, Human Rights Activist Adv. Adilur Rahman Khan of Odhikar, Agricultural scientists Dr. Rezaul Karim and Dr. M. A. Sobhan, University teachers and public health experts spoke on the occasion.

Farida Akhter shared the information about the Monsanto Tribunal (October 2016) and the Legal Opinion delivered in April, 2017. Monsanto Tribunal is an international civil society initiative to hold Monsanto accountable for human rights violations, for crimes against humanity, and for ecocide. It  was held in The Hague, Netherlands during 15 - 16 October, 2016. Eminent judges heard over 30 witnesses, lawyers and experts. On 18 April 2017, the Judges publicly delivered a legal opinion following procedures of the International Court of Justice. 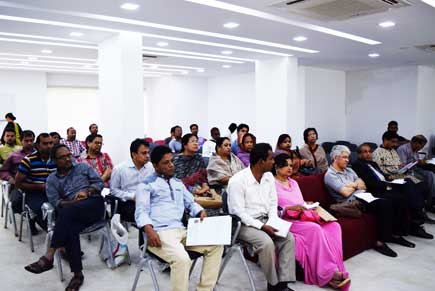 The witnesses from US, Latin America, Europe, Africa, Australia and Asia testified how Monsanto has violated human rights and has committed crimes against the planet by aggressively promoting its products, lobbying politicians and attacking independent scientists. The Monsanto Tribunal confirmed how poisonous products and toxic chemicals such as Round Up (Glyphosate) & Basta (Glufosinate), neonicotinoids, atrazine, and other pesticides have led to the destruction of soils, to desertification, to the extermination of bees, to the rise in health epidemics such as cancer, birth defects, and respiratory disease. Specific cases of Bt Cotton in Africa and India were presented. The testimony on Bt Brinjal showed how the weak regulatory mechanism on Biosafety was used to introduce a GM food crop without the knowledge of the farmers and how patents on 9 indigenous varieties were taken by Monsanto.

The Monsanto Tribunal was of the opinion that Monsanto has indeed infringed on the public’s rights to food, health, a healthy environment and the freedom indispensable for independent scientific research. The tribunal concluded that:

• Monsanto has violated human rights to food, health, a healthy environment and the freedom indispensable for independent scientific research.

• ‘Ecocide’ should be recognized as a crime in international law

• Human Rights and environmental laws are undermined by corporate-friendly trade and investment regulation.

The speakers at the Press Briefing expressed concerns about excessive use of pesticides and chemical fertilizers that is poisoning our food system and highlighted the need for protecting environment and biodiversity through ecological farming. Monsanto product Glyphosate (RoundUp Ready) is used in the Tea Gardens. Concerns were expressed about efforts to introduce Bt Brinjal and other GM food crops such as RB Potato, Golden Rice. Demand was raised the field cultivation report of Bt Brinjal to be made public about its performance which has largely failed and company is trying to hide the information. The Environment Ministry must make sure that Bt Brinjal is labeled before it goes in the market.