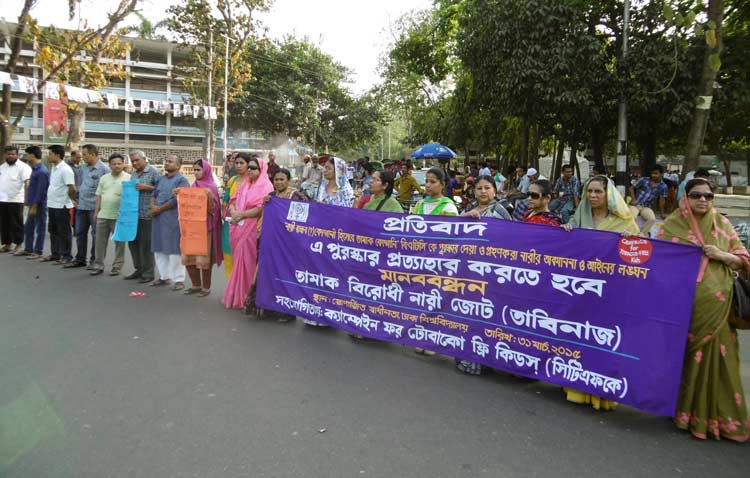 British American Tobacco Company received the Most Female Friendly Organization award from Brand Forum in connection with the International Womens’ Day on 8 March, 2015. This information was not known to the activists who work for establishing the rights of women. The news was published in the Daily Star on 17 March, 2015. It was published much later. So these protest rallies and human chains are being organized in Dhaka and other 14 districts including Dinajpur, Rangpur, Natore, Sirajganj, Jamalpur, Kushtia, Khulna, Satkhira, Magura, Bhola, Cox’s bazar, Bandarban and Narshingdi. 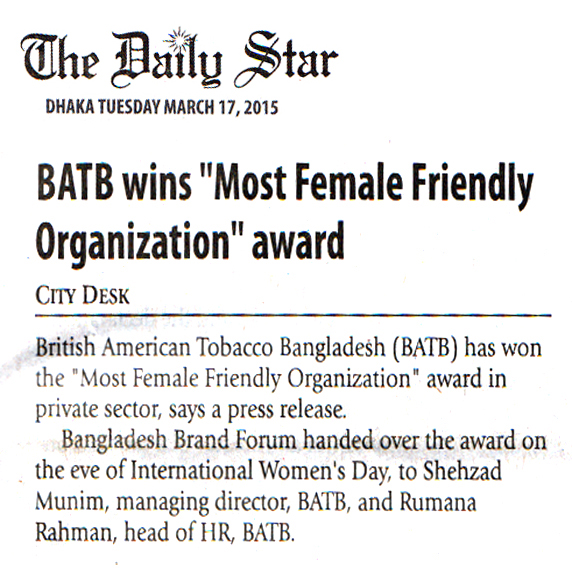 It was strongly protested in the Human Chain, organized by TABINAJ at Dhaka that offering award to British American Tobacco Company was dishonor to women and violation of law. Attention of the Government was drawn to the fact that the dignity of the International Womens’ Day disgraced by this type of dishonor.

“British American Tobacco Company targets young women and men so that they are interested in tobacco consumption. That is why they have offered the women friendly award on 8 March, the special day for women. I like to draw the attention of the Government that this award must be withdrawal and further caution is expressed so that the tobacco company do not have such audacity” – Sayyida Akhter, on behalf of TABINIJ  expressed deep sense of indignation in this context.

“Apparently, it appears that advertisement on tobacco has been stopped but infact it has not stopped. The award offered to British American Tobacco on 8 March, 2015 is such an indication. We strongly protest against this act of advertisement. This award must be withdrawn” mentioned Sharmin Rahman on behalf of Ahsania Mission with deep anger.

“March 8 is an important date for achievement of women. We got the recognition of 8 March with lot of movements. We do not want to be dishonored on this occasion. It is our question how a company doing so much of harm to people can be women friendly. We record our protest against offering award to British American Tobacco Company. Immediately this award should be withdrawn” said Selina Rashid, Protisruti and member of TABINAJ. 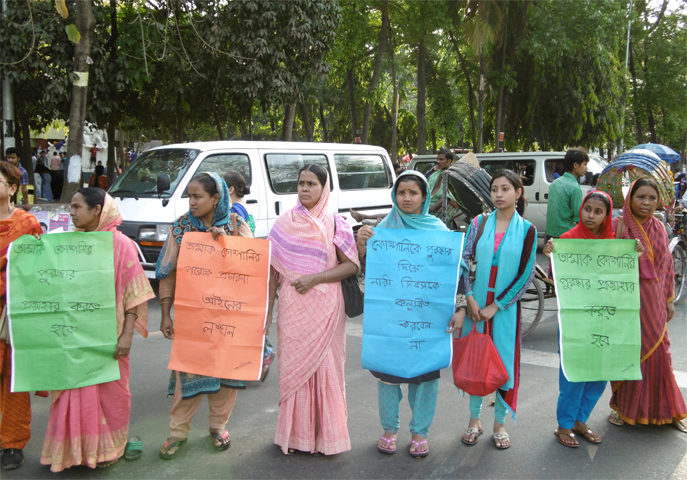 “Generally we know there is appreciation for commendable activities and condemnation for unjust acts. We are extremely sorry to know that the British American Tobacco Company producing and distributing poisonous products like tobacco was offered award as women friendly organization by Brand Forum in connection with the International Womens’ Day, 8 March. Shame, Shame! How could such a company doing so much harm to us, get an award. We strongly protest against this act of mockery and draw the attention of the concerned authority for withdrawing this award” said Dr. M. A. Sobhan.

“Smoking and tobacco products usage ( control) Law 2005 was amended in the parliament in 2013. We worked hard for amendment of the law. Every year, a total of 2, 81. 000 people across the globe are becoming disabled on account of tobacco. We are protesting against publicity of tobacco company. Is there no other women friendly company ? Shame! Immediately the award must be withdrawn” mentioned Ibnul Sayed Rana.

Tobacco companies have been killing people by offering poison like tobacco and on the other receiving award show-casing so-called good activity. They have been destroying the trees indiscriminately as fuel for curing tobacco leaves in the kiln. On the other hand planting fast growing epil epil trees for using as fuel for curing tobacco leaves and have been receiving award for tree plantation in connection with the World Environment Day (5 June) consecutively for some recent years. They also organize tree plantation inauguration by the Honorable Environment Minister. This mockery has been stopped very recently in the face of our strong protest. In the mean time, the forests in Chittagong Hill Tracts including Bandarban have been decimated badly. The hills have been denuded- the activities in the Human Chain highlighted.

Demand of TABINAJ in the Human Chain:

1. Award given to tobacco company must be withdrawn.

3. Companies inflicting harm upon women should not be awarded.