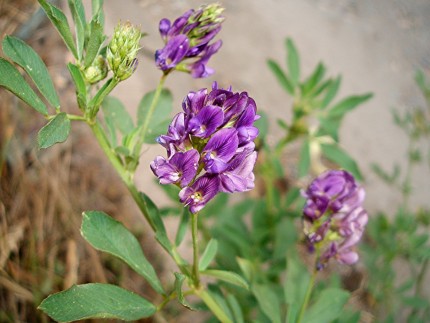 Other Uses : In poultry diets, dehydrated alfalfa and alfalfa leaf concentrates are used for pigmenting eggs and meat, due to their high content in carotenoids, which are efficient for colouring egg yolk and body lipids. Humans also eat alfalfa sprouts in salads and sandwiches. Dehydrated alfalfa leaf is commercially available as a dietary supplement in several forms, such as tablets, powders and tea. ] Fresh alfalfa can cause bloating in livestock, so care must be taken with livestock grazing on alfalfa because of this hazard. Like other legumes, its root nodules contain bacteria, Sinorhizobium meliloti, with the ability to fix nitrogen, producing a high-protein feed regardless of available nitrogen in the soil. Its nitrogen-fixing ability (which increases soil nitrogen) and its use as an animal feed greatly improve agricultural efficiency.

Alfalfa, Medicago sativa, also called lucerne, is a perennial flowering plant in the pea family Fabaceae cultivated as an important forage crop in many countries around the world.

The name alfalfa is used in North America. The name lucerne is the more commonly used name in the United Kingdom, South Africa, Australia, and New Zealand. It superficially resembles clover, with clusters of small purple flowers followed by fruits spiralled in 2 to 3 turns containing 10-20 seeds. Alfalfa is native to warmer temperate climates. It has been cultivated as livestock fodder since at least the era of the ancient Greeks and Romans.

lfalfa is widely grown throughout the world as forage for cattle, and is most often harvested as hay, but can also be made into silage, grazed, or fed as greenchop.[8] Alfalfa usually has the highest feeding value of all common hay crops. It is used less frequently as pasture.[7] When grown on soils where it is well-adapted, alfalfa is often the highest-yielding forage plant, but its primary benefit is the combination of high yield per hectare and high nutritional quality.[9]

Its primary use is as feed for high-producing dairy cows, because of its high protein content and highly digestible fiber, and secondarily for beef cattle, horses, sheep, and goats. Alfalfa hay is the most widely used fibre source in rabbit diets.