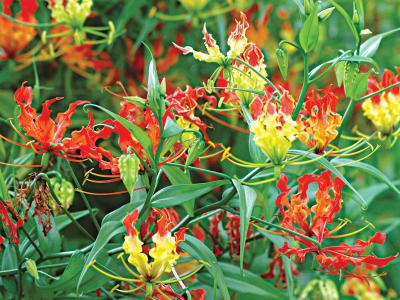 Other Uses : Native to much of Africa and Asia, but it is known worldwide as an ornamental plant, a medicine, a poison, and a noxious weed. This plant has been used as a traditional medicine for the treatment of gout, infertility, wounds, snake bite, ulcers, arthritis, cholera, kidney problems, typhus, itching, leprosy, cancer, impotence, smallpox, sexually transmitted diseases, and many types of internal parasites. It is also an anti helmintic and Laxative. The plant is poisonous, toxic to cause human and animal death.

The species is the national flower of Zimbabwe and also the state flower of Tamil Nadu in India.

The alkaloid-rich plant has long been used as a traditional medicine in many cultures in the treatment of gout, infertility, open wounds, snakebite, ulcers, arthritis, cholera, colic, kidney problems, typhus,] itching, leprosy,  bruises, sprains, hemorrhoids, cancer, impotence, nocturnal emission, smallpox, sexually transmitted diseases, and many types of internal parasites. It is an anthelmintic.It has been used as a laxative and an alexiteric.The sap is used to treat acne and head lice.In a pregnant woman, it may cause abortion. In parts of India, extracts of the rhizome are applied topically during childbirth to reduce labor pain.

Other uses for this plant include arrow poison in Nigeria and snake repellent in India.Some cultures consider it to be magical.The flowers are part of religious rituals.

This species is the national flower of Zimbabwe. In 1947, Queen Elizabeth II received a diamond brooch in the shape of this flower for her twenty-first birthday while traveling in Rhodesia, now called Zimbabwe.It is also the state flower of Tamil Nadu.