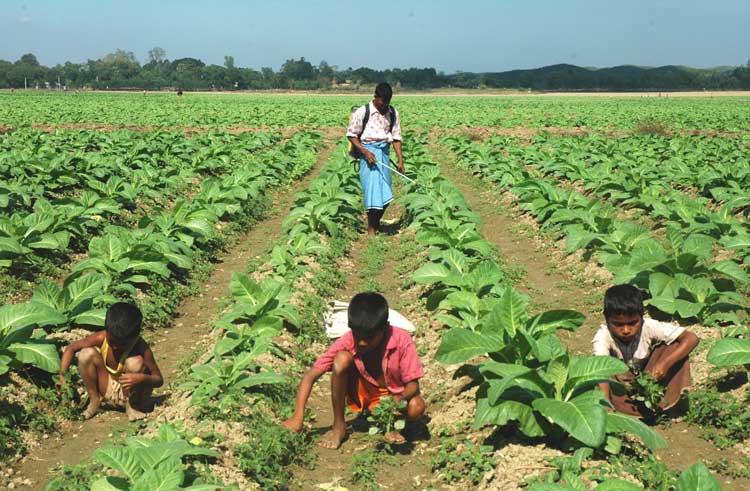 The WHO Framework Convention on Tobacco Control (WHO FCTC) recognizes the need to promote economically viable alternatives to tobacco production as a way to prevent possible adverse social and economic impacts on populations whose livelihoods depend on tobacco production. Moreover, Parties agreed to have due regard to the protection of the environment and the health of persons in respect of tobacco cultivation and manufacture.

Tobacco, mostly Flue Cured Virginia (FCV) and Barley variety, is a company sponsored crop grown since the last five decades. According to official data for 2016, tobacco is grown in 46,472 hectares of land, producing 87,628 tons. Bangladesh ranks 14th for area under tobacco, 12th for production in quantity, and has a share of 1.3% of global tobacco production [2] 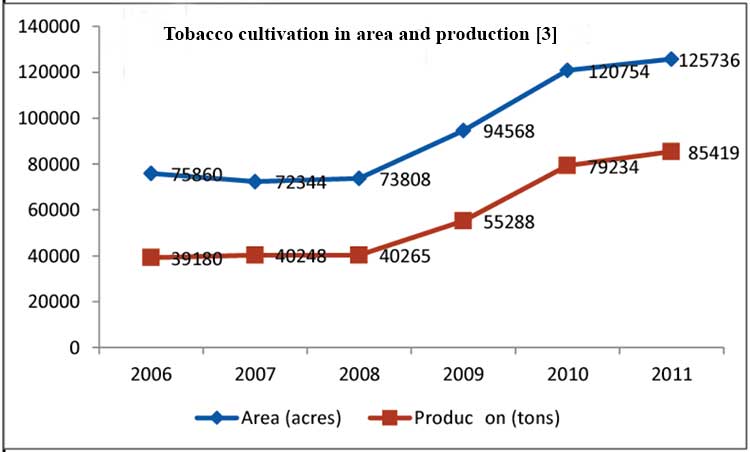 Tobacco farming is an unregulated, a company sponsored initiative trapping the farmers with credit and input bondage.

Excessive use of agro-chemicals including chemical fertilizers and pesticides is causing soil depletion as well as impacting on health of the farmers and workers.

Use of unpaid (family) or low paid women and child labour in post-harvest curing of leaves .

Nicotine exposure at different stages of tobacco growing is a health concern for farmers and workers. 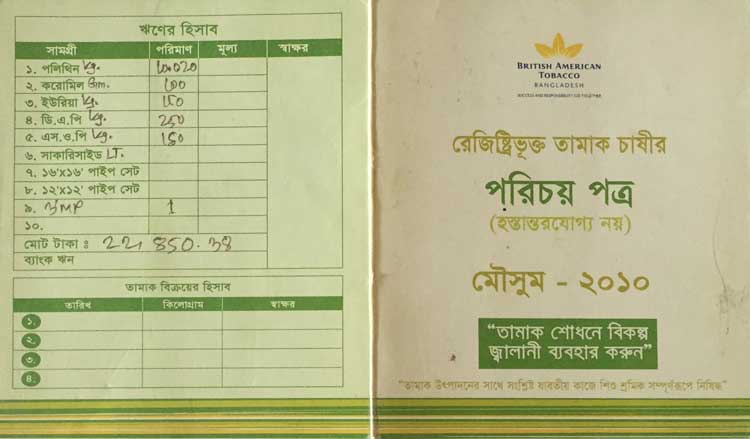 The Ministry of Health and Family Welfare drafted the Tobacco Cultivation Control Policy 2017 to discourage tobacco cultivation as mandated by the Smoking and Tobacco Products Usage (Control) (Amendment) Act, 2013 in compliance with Article 17 and 18 of the Framework Convention on Tobacco Control (FCTC). The policy with multi-sectoral involvement is awaiting Ministerial approval.

As an immediate goal, the policy through various measures, the tobacco cultivation area will be brought down by half between 2017 and 2026. Production of other crops will be increased on the same land. The National Tobacco Control Cell under the health ministry will coordinate actions among ministries to implement the policy [6].

The major emphasis of the draft policy is to provide farmers with easy loans and special incentives for fertilizer, seeds and other farm inputs and equipment to help them switch from tobacco cultivation to other crops. Farmers will be extended support to market their food crops so they can get fair prices for their produce. Alternative non-farm livelihood opportunities will also be created through multi-stakeholder involvement in the implementation of the policy.

The policy restricts companies to provide tobacco growers with subsidies, loans or other supports.

The draft policy stresses restriction on plantation and processing of tobacco products within 500 yards of homesteads, and its cultivation within 150 yards of the slopes of rivers, canals and lakes.

The use of wood to process tobacco will be restricted to prevent environmental degradation. Use of child labour is strictly banned under the policy.

The government of People’s Republic of Bangladesh imposed a surcharge of 1% on the income from imported and locally produced cigarette, bidi, zarda, gul and other tobacco items in the budget [7]. Accordingly BDT 3 billion per year is being deposited into the health ministry. The ‘’Health Development Surcharge Management Policy-2017" is aimed at controlling the use of tobacco and creating mass awareness against the adverse impacts of tobacco on human health. The fund is used for various purposes of the health sector, particularly in tobacco control and preventing non-communicable diseases. The fund would be used in 14 specific sectors to help ensure long- term management in the health sector, especially to create awareness among common people against tobacco use, prevent farmers from cultivating tobacco and create alternative employment opportunities for them.