India asks about Btbrinjal: what Bangladesh can say? 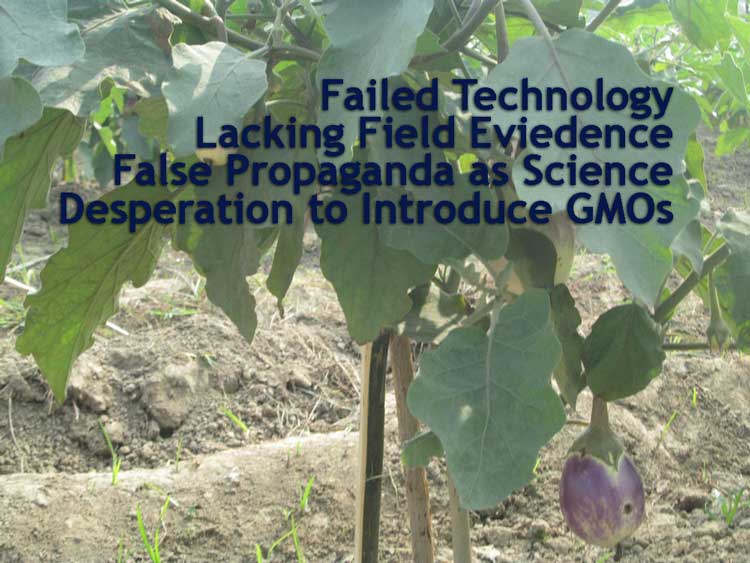 SINCE 2014, Bangladesh has been commercially field testing four Btbrinjal varieties. In October 2013, on its last day of the session, the 9th parliament approved the genetically modified eggplants. The timing was strategic — a very agitated political situation prior to the national election was a convenient moment to introduce an inappropriate and unsafe technology. Btbrinjal has hardly any agronomic value but threatens Bangladesh with potential biosafety risks. Btbrinjal is the first GM vegetable crop that got the government approval despite protests from environmental and farmers’ organisations. Mahyco, the Indian counterpart of Monsanto, who gave the technology to Bangladesh Agricultural Research Institute, has now applied seeking approval for commercial release of Btbrinjal in India. India’s biotech regulator, the Genetic Engineering Appraisal Committee (GEAC) ,has sought information about Btbrinjal from Bangladesh.

The GEAC noted that the Indian government had put a moratorium on the commercial release of Btbrinjal in 2010 and asked the Indian Council of Agricultural Research to ‘obtain relevant information and data on the post commercial release effects of Btbrinjal... from Bangladesh Agricultural Research Institute’. The committee also directed ICAR to undertake such studies in Bangladesh and also asked Mahyco to explore independent scientific studies on the Bangladesh experience (Livemint, October 13, 2018).

Now the question is what Bangladesh can say about Btbrinjal? Bangladesh experience demonstrated bad scientific practice and research ethiocs. In addition to that exposed blatant failure of Btbtinjal in the farmers’ field and the scandals of scientific lies. Btbrinjal is a genetically modified food crop in which Crystal gene from Bacillus thuringiensis has been inserted into brinjal genome to increase the resistance of brinjal against Fruit and Shoot Borer insect. Bangladesh Agricultural Research Institute received the seeds of Btbrinjal from Maharastra Hybrid Seed Company, India. No transfer of technolopgy or knowledge took place. The BARI had no role in it; it only used the Monsanto-Mahyco technology to conduct experiment with the Btbrinjal through the farmers in Bangladesh. Bangladesh is merely an experimental field and BARI was used to bypass the scientific ethics and regulatory measures mandatory for field cultivation of a GMO; such by-passing was difficult in India and the Philippines.

The four varieties of Btbrinjal approved for field cultivation were Btbrinjal 1 (Uttara), Btbrinjal 2 (Kajla), Btbrinjal 3 (Nayantara) and Btbrinjal 4 (Ishwardi 006). A circular was issued by the ministry of environment and forest (section 2) which accorded approval to Btbrinjal on 30 October, 2013 on seven conditions to be fulfilled by BARI including the labeling of the fruits while selling in the market. None of the approval conditions were complied with till today and there is no authority to monitor the violations. The repressive political atmosphere prohibits criticism of GMOs and Btbrinjal in particular.

In the last four years, there is no independent research by any Bangladeshi scientists to prove their claim authentically. The so-called success stories are published in very few national newspapers and in CropLife or in Alliance of Science run by Cornell University, USA. The only report that came out in the Frontiers in Bioengineering and Biotechnology has been questioned by journalists and scientists (internally). The Frontiers article titled, ‘Bt Eggplant Project in Bangladesh: History, Present Status, and Future Direction’ has many authors, but dominated by scientists from organisations in US and from the institutions who have biased interest in promoting the success of Btbrinjal in Bangladesh. Out of six different organisations only one is from Bangladesh represented by BARI and led by Dr AK Azad who is the new director general of the organisation. He just joined the institution and is alleged to have been induced to ‘lend’ his name in the report to give legitimacy to the facts without his own involvement in generating the data. Two researchers are from the Consultants Sathguru, who have been involved in the Tri-partite Sublicense Agreement signed between Maharashtra Hybrid Seeds Company Limited, Sathguru Management Consultants Pvt Ltd, and BARI on 14 March, 2005 in which Sathguru is providing management advisory services relating to technology transfer strategies, structuring public-private partnerships etc. The others are from Cornell University and USAID who are providing financial and technical support.

Therefore, this report is not done by any independent scientists from Bangladesh nor by any unbiased scientists from outside to justify the claims of success. Surprisingly, BARI website does not have any report of its own about the performance of Btbrinjal. Former director general of BARI, Dr Rafiqul Islam Mondol is now expressing his skepticism over the Btbrinjal performance and that it is free from pesticides.

However, they have access to mainstream newspapers and published articles that are misleading with false claims. On the occasion of World Food Day, 2018, Arif Hossain, a visiting fellow of Cornell Alliance for Science, Cornell University has written an article published in a Bengali and English daily (Kalerkontho and English daily newspapers. In his success story titled, ‘The goal of ‘Zero’ Hunger in Bangladesh’ he writes,

"One of the recent success stories has been the rapid adoption of Btbrinjal by Bangladeshi farmers. Brinjal, or eggplant (or begun), is an important culinary vegetable but has historically suffered from severe pest infestation and resulting in high rates of pesticide contamination. Since the Btbrinjal was deployed by Bangladesh Agricultural Research Institute, some 33,000 smallholder farmers—about 20 percent of the nation’s total brinjal farmers—have begun to grow the crop. Overall, they have reportedly experienced a 61 percent reduction in pesticide use and a six-fold increase in income" ('The goal of 'Zero-Hunger' in Bangladesh'. The Daily Star, October 16, 2018).

So the number of farmers 33,000 as is shown in his article is a blatant exaggerated lie. Besides the seeds distribution by BARI through the Department of Agricultural Extension to targeted number of farmers, there is no instance of farmers buying or receiving seeds from any other source. The distribution of seeds to farmers also does not guarantee that those farmers have been cultivating Btbrinjal.

The field-based officials of the DAE are given targets of Btbrinjal seed distribution to the farmers. Here they face several problems: 1. Farmers are not interested in cultivating this ‘new’ variety as this did not show good performance in others field. 2. Same farmer, who was given the seed in the previous season, does not want to take it again. 3. It is difficult to prove that Btbrinjal is better than local varieties as farmers are earning better income through cultivation of those varieties. 4. Btbrinjal seeds do not germinate properly or the plants are weak and often do not have fruits. Therefor, how many farmers have finally sown the seeds and have had successful cultivation is not known. In 2016, farmers were given Btbrinjal seeds as the flood relief service to farmers; many farmers refused it, particularly farmers who had bad experiences in Tangail district.

Here is an example of the difficulties faced by DAE field officers from one area (Pabna) as of October, 2018:

A Deputy Agriculture Extension Officer (wishing to remain anonymous) said selected Deputy Agriculture Officers are given a target to give Btbrinjal seeds to one farmer only in three wards under a Union. Even that is difficult to find, because farmers do not want to take the seeds. A farmer given the seed once does not want to take it again, because the seeds do not grow well and do not give fruits. The plants are weak, and the fruits are not seen. On the other hand, farmers cultivating local varieties have good productivity and can earn good income. The officer was worried how to fulfill the target! It is very difficult to find farmers, but ‘we are helpless because we have to keep our job!’

The seeds have arrived from headquarters last week (October) and are distributed to 10 to 12 farmers (20 grams each) to reluctant farmers in six unions of the upazilla. This officer had to give to one farmer only. Farmers have not yet sown the seeds. Therefore the claim that 20 per cent of nation’s brinjal farmers are growing the crop can be challenged to be false.

On the other hand, the claim of 61 per cent reduction in pesticide use and a six-fold increase in income is not the right picture. These were referred in the Frontiers article from two unpublished research by BARI scientists and do not match with other information from Btbrinjal farmers. This information can also be challenged as other studies show loss of income by Btbrinjal farmers and that pesticide use has not been reduced. UBINIG study during September- October, 2015 with 79 out of 110 farmers in the Second Round showed a farmer incurring cost of Tk 25,000 for cultivating Btbrinjal in 22 decimal of land. He got 1119 kg, which he could sell only at Tk 12000. The Net loss was Tk13500. Another farmer Md. Mosharraf Hossain spent Tk 29,000, could sell his produce only at Tk 10000. Net loss was 19,000. Other farmers had similar experiences.

In the case of pesticide use, the reality was that the farmers had to use huge amount of pesticides recommended by the supervising authorities of BARI and DAE. These included Comfidor, Ektara, Admasar, Dithen M-45, Bavistin, Thiovit, Basudin, Furadan, Borax, Demsa granular, Vim powder, Admire, 200sl (Bayer crop science), Bleaching powder, Heckel, Salclox, Diazinon etc. There were many other insecticides and fungicide sprayed as provided by DAE. Thirty five types of pesticides including acaricide, insecticide and fungicide were sprayed several times in the Btbrinjal fields as per direction of the supervising officials ('UBINIG, 2015).

No human health safety test was done till date. However, it is claimed that Btbrinjal is substantially equivalent to food and feed from non-Btbrinjals. A study on the introduction of Btbrinjal in Bangladesh refers that the safety of Btbrinjal was tested in various feeding studies (including among others chicken, cow and fish) and no toxicity was detected and no new allergenic compounds were found due to feeding Btbrinjal. According to the study, Btbrinjal fruits were used to determine whether the Bt protein was present in cooked fruits. The Bt protein was undetectable in cooked fruits. This study indicates that the Cry1Ac protein in Btbrinjal fruits is rapidly degraded upon cooking (Meherunnahar and Paul, 2009). This research was conducted in 2009, four years before the approval of Btbrinjal in 2013 and the researchers did not belong to any health institution of the country. One of the authors was from the Department of Environment and the other was from the Department of Agri-business in a private university.

So what is Bangladesh is going to say about the Btbrinjal? Should India follow the same unethical practice to coercively impose a failed technology having potential biological risks on the famers? Bangladesh has been at least successful in such effort!

UBINIG, 2015; Btbrinjal under Life Support: Experiences of farmers under second round of field cultivation , see other articles in www.ubinig.org