Comments on IFPRI Study Report published in a national daily 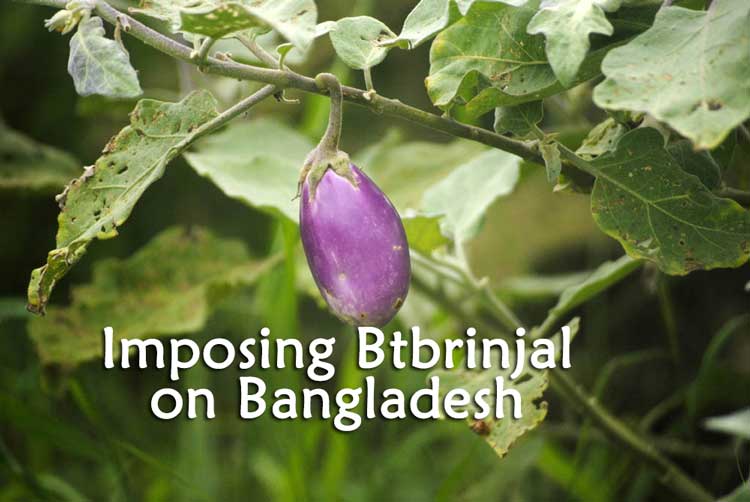 Dhaka Tribune, a Bangladeshi daily, published a report by Reaz Ahmed on IFPRI ‘s Btbrinjal study on March 7th, 2019: “5-yr after releasing its first GM crop Bangladesh says farmers gain by adopting Bt brinjal”. Till now we have not been able to get a copy of the IFPRI report. Nevertheless, until we could put our hand on the full report and make our detail critique, we felt the media report demands some immediate response.

Question 1: About the cover picture

Dhaka Tribune published a picture with the caption: ‘Farmers busy selling Bt brinjal at a village market’. The picture does not say from which area/village market the shot has been taken. 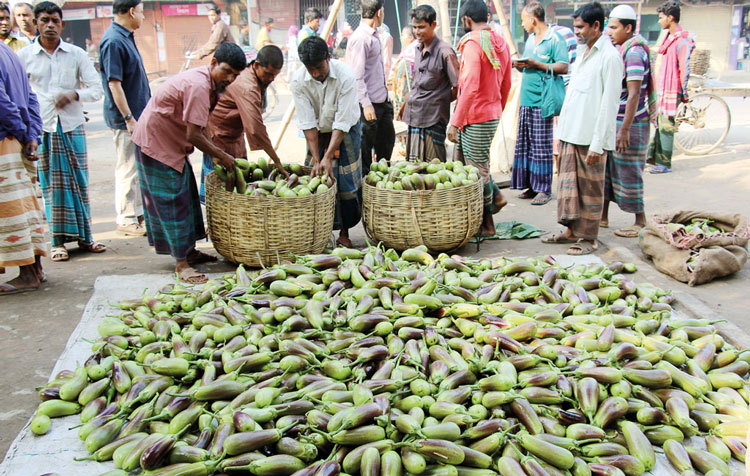 Dhaka Tribune Caption of this imege published with the report: 'Farmers busy selling Bt brinjal at a village market COURTESY'. It seems they do not match with the 4 Btbrinjal Varieties released for field.

This is a brinjal season. Villages are rich in diverse local varieties of brinjals and farmer are selling regularly on the weekly Hats/bazaars. So it cannot be ascertained whether this particular brinjal is a Bt Brinjal.

Even if it is, which one? Four Bt brinjals have been released for field cultivation by farmers. Each of them look different as the picture shown below: 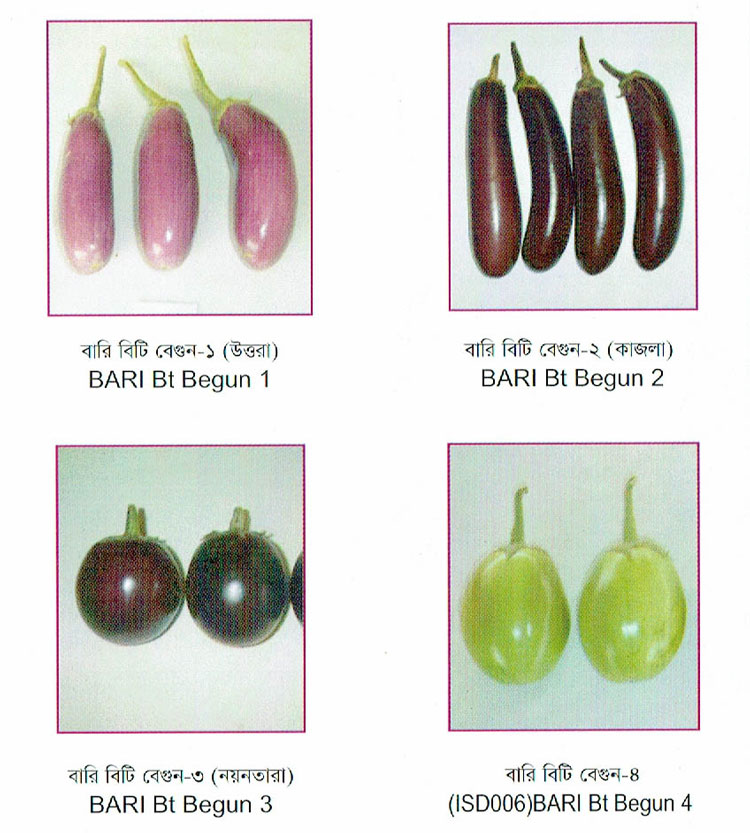 Do the brinjals shown in the picture of Dhaka Tribune match with any of these Bt brinjals? Obviously, it does not. Rather they have more resemblance with one of the local variety brinjals known as ‘Atghoria’. This particular variety is very popular and sold abundantly in Pabna region.

These pictures of ‘Atghoria’ below are taken from Dasuria Hat in Ishwardi Upazilla, Pabna on 12 March, 2019. Atghoria variety is a very popular brinjal variety in this region. It has high yield and is soft and very tasty. It requires hardly any use of pesticides. The picture Dhaka Tribune published claiming that ‘farmers busy selling Bt brinjal at a village market’, is very difficult to accept. So we may raise a genuine question is it really a Bt brinjal or any other local variety? If it is not, such images could seriously mislead the readers and thus violates basic journalistic ethics. 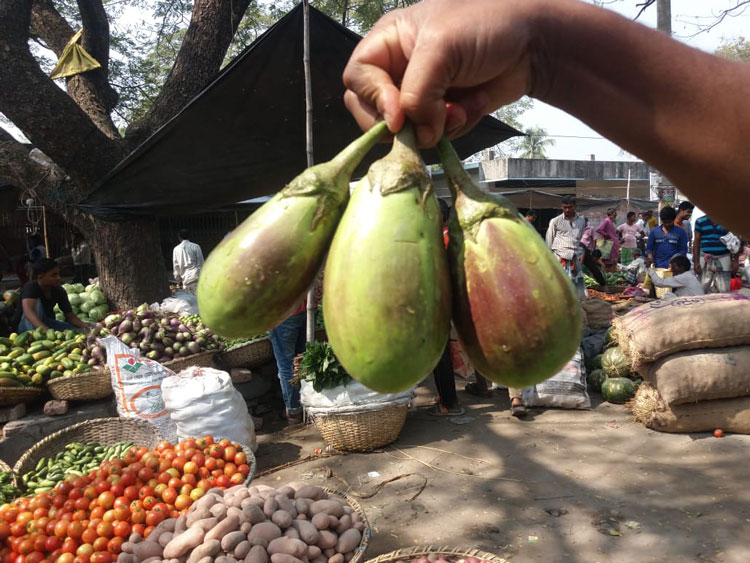 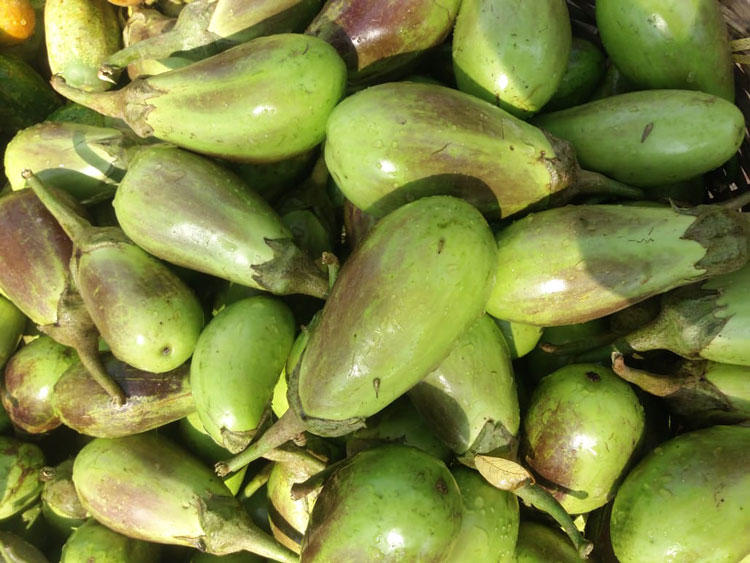 If the Brinjals shown in the picture is Bt brinjal, then it is being sold without any label. Are the promoters of Bt brinjal showing with evidence that Bt brinjal is sold in large quantities without labeling? Is it not a violation of the approval condition number 6 given by National Committee on Biosafety in the Ministry of Enviroment, which says “The applicant organization must take effective measures for labeling so that Bt brinjal can be marketed as per biosafety rules”. The applicant organization is the Ministry of Agriculture. Does International Food Policy Research Institute (IFPRI) endorse such violation?

The study conducted under the Ministry of Agriculture on 1200 farmers was designed and carried out by the International Food Policy Research Institute (IFPRI). The assessment study findings claim “farmers got benefitted financially by cultivating Bt brinjal and they are now much less prone to health hazards caused by pesticide sprays.”

What kind of study was done to claim that there are less health hazards as the brinjals sold without any identification? No one can find the consumers of Bt Brinjals, except the farmers themselves. It is an assumption ‘they are now much less prone to health hazards caused by pesticide sprays’; and not a finding. The genetically modified Bt brinjal has been developed by inserting a crystal protein gene (Cry1Ac) from the soil bacterium Bacillus thuringiensis into the genome of various brinjal cultivars thereby, protecting the crop from infestation of Fruit and Shoot Borer (FSB). The major pests of brinjal include insect, mite, fungi, nematode and bacteria. The fruit and shoot borer (Leucinodes orbonalis) is one of the insect pest of brinjal. The agriculture officer from DAE visited the brinjal field on several occasions. UBINIG study (2015) showed Fertilizers including TSP, MOP, Urea, Gypsum, Zinc and Boron were supplied by the officers of DAE. The plants of Bt Brinjal 2 and Bt Brinjal 4 varieties were affected by aphid, white fly, virus and mite. Pesticides were sprayed several times. All the pesticides were supplied by the DAE.

In Bangladesh the majority of farmers (71%) belong to small households, owning less than a hectare land, only 25% households have over a hectare to 3 hectares. Brinjal farmers are mostly small scale farmers and allocate land to brinjal farming which is less than a hectare. Bt Brinjal farmers also fall into this category. In a UBINIG study (2019) 71% of farmers receiving Bt Brinjal seeds were small scale farmers and only 25% farmers were middle farmers. However, they do not allocate all the land they own for brinjal farming and also not for Bt Brinjal farming. In the initial round of BT Brinjal farming (2015-16), 33 farmers (89%) out of 37 allocated land 33 decimal, i.e. less than one-third of an acre for Bt brinjal. According to UBINIG study, the land allocated by the farmer for Bt brinjal cultivation varied by number of seedlings given and therefore it was found between 4 decimals to 38 decimal of land. The land was selected and the amount was determined by the DAE official himself.

This scenario is less likely to change for 1200 farmers interviewed in the IFPRI study. So this calculation of Tk. 30,000 net profit per hectare is more of a “guestimate” rather than an resanable scientific estimate.

Farmers do not buy Bt Brinjal seeds from the open market, nor do they ask for the seeds from the Agricultural office. The Department of Agricultural Extension (DAE), according to its own targeted selection, supply seeds to the farmers along with inputs such as fertilizers, required pesticides, cash money and technical support.

However, we have followed up with a farmer cultivating Atghoria; the net profit from the local brinjal cultivation is much higher than that of Bt Brinjal. In a cost and income calculation of the Atghoria variety, the farmer spent Tk. 12,000 in a piece of land of 33 decimal ( in Bangla 1 bigha). He got 4.48 tons of brinjals and sold at the rate of Tk.12 per kg. His income was Tk. 53, 760, net profit was Tk. 41,760. In terms of hectare calculation it would be 33.18 tons of brinjal, with total income of Tk. 398,160. So the income is not very promising in the case of Bt Brinjal. This is again misleading propaganda in favour of Bt brinjal. These are conservative calculation. Any scientific economic analysis will demonstrate the agronomic superiority of local variety.

IFPRI claims, FSB ravages brinjal fields and can cause loss of the crop by as much as 70 percent unless a heavy dose of pesticide is used. Before, FSB pest used to damage up to one-third of brinjal crops. Now, virtually none of the Bt brinjal is damaged by the FSB pest. Farmers are found to apply pesticides up to 50 to 80 times in a cropping season against a recommended dose of 25, making the vegetable highly toxic. 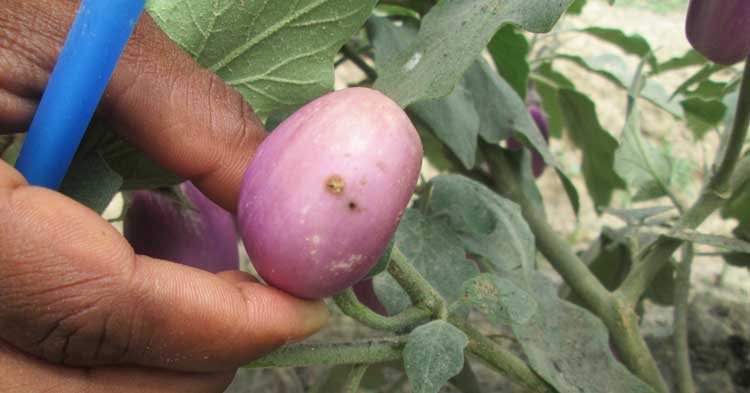 The FSB infestation is over generalized. There are many local varieties which are resistant to pests. It is the hybrid varieties that needs over use of pesticides. The genetic modification to brinjals was done on local varieties, not on hybrids.

It is claimed that in Bangladesh a large percentage of the crop does not make it to the market because of FSB infestation.

In fact, the main problem of marketing for brinjal farmers is the price, which becomes very low in the season due to high productivity of the local variety brinjals. A newspaper report (Bangla Tribune April 3, 2018: ৬ মণ বেগুণের দামে এক্ কেজি গরুর মাংস) depicts a story titled 1 kilo of beef after selling 6 maunds (224 kg) of brinjal. The farmers sold 1 maund at a price of Tk. 80 to 120 only. The story was about brinjal farmers in Narsingdi, which is very close to the capital city Dhaka, yet were selling brinjals only at Tk. 2/3 per kg. The farmers had bumper crop of brinjal and as there is no price control mechanism and no proper system of transportation, the farmers incurred huge loss.

Financial Express also reported about low price of Brinjals related to high yield. It reported 'Bumper harvest of brinjal has posed problems for farmers in many districts this season' (28 March 2018) in the absence of proper marketing facility and government intervention in ensuring fair price for their produce.The high yield of brinjal has caused its price to crash, putting the farmers at the mercy of traders. Brinjal was selling at Tk 4-Tk 7 a kg in Narshingdi, Gazipur, Jamalpur, Mymensingh, Bogra, Rangpur, Comilla and Barisal districts in the past week।

The report points out that ‘the drop in prices at the growers' end could hardly benefit urban consumers, as the vegetable was still selling at much higher prices in the city, allowing middlemen to pocket a huge profit’. Consumer groups complain that ‘there is no market monitoring which encourages middlemen and big traders to dominate the market, depriving both the farmers and consumers of fair price’.

While the FSB infestation could be ‘solved’ by genetic modification by inserting a crystal protein gene (Cry1Ac) from the soil bacterium Bacillus thuringiensis into the genome of various brinjal cultivars, how to solve the low price problem? Can it be genetically modified? The answer is obviously ‘No’. So let’s not make a big deal about FSB infestation and allow the corporations like Monsanto to have control over our most important vegetable crop like brinjal. We should rather try to help the farmers with proper marketing and price mechanism.

We urge upon the government to recognize the fact that Bangladesh does not have law and legally stipulated regulatory authorities to adequately safeguard ecology, biodiversity and human health. Lack of law and legally stipulated regulatory authority on GMOs notwithstanding, it is the responsibility of the state to protect the citizens from harmful activities of any person, organization and agency that can threaten health, life, environment, ecology or the lifestyles and the associated livelihood and knowledge practices of local and farming communities.