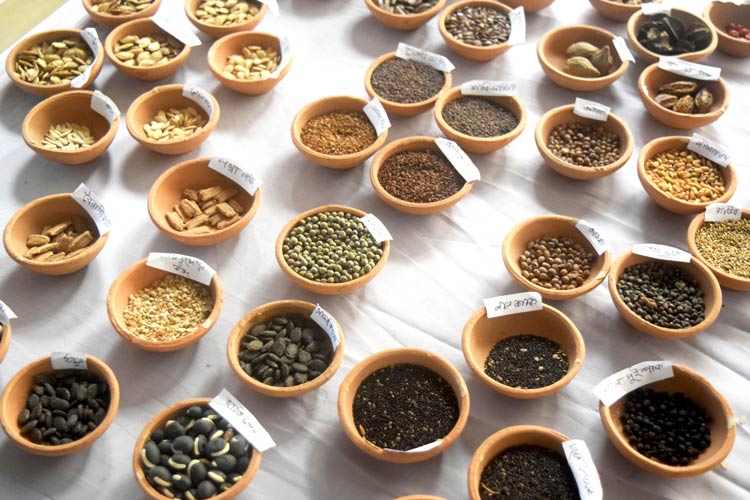 Nayakrishi Andolon is now known to the world as a strong farmers’ movement in Bangladesh. Those who work with farmers for preservation of seeds, biodiversity and environment are friends of Nayakrishi. Now people around the world are trying to find ways towards pesticide-fertilizer free agriculture, or ways to rebuild bio-organic foundation of agriculture. The future of agriculture is bound to rely on life-affirming biodiversity-based farming. Everyone understands the simple fact that no one will survive by poisoning our earth and particularly food with pesticides and chemicals.

Unfortunately our farmers are falling into the 'poison' trap of merchants and seed corporations, forgetting their own glorious experiences of agriculture of hundreds of years. Farmers are deceived by 'attractive' advertisements by the companies and corporate scientists abusing science for profit. There are hired “experts” who claim that due to climate change agriculture cannot be based on nature and knowledge practice of farming communities. They understand 'nature' as somethig fixed and dead as if it is not a living being that constantly change and evolve. Why do they claim this? So, that  companies could supply flood, drought and saline resistant seeds produced in their laboratories. These seeeds are patented, and farmers are compelled to buy from them with high price. As if farmers never dealt with climatic variability and natural disasters! We have many indigenous varieties which are flood, drought and saline resistant. We have vast experience of adapting to changing climatic conditions for hundreds of years.

We live in the Gangetic Delta confluenced by two other mighty river, Brahmaputra and Meghna. We have been cultivating rice and other crops that suit our climatic conditions and biogeographical characteristics. Climatic challenges had always triggered invention and adaptation among farming communities. Our farmers in coastal zones of the Bay of Bengal learnt to cultivate in the saline soil. They have identified the varieties which survive in saline conditions. Similarly in the drought and flood plain areas, farmers have developed varieties that survive in dry and standing water. In spite of such rich base of our experiences, we are handing over the farmers varieties preserved in the national gene banks to the foreign companies without the knowledge of the farmers. They patent the seeds after some modification and sell to us. Farmers have never patented the thousands of varieties they have developed over hundreds of years. Now these are being pirated and sold to us at a higher price. We have to pay the companies for our own seeds as royalty. We are losing our seeds and are becoming dependent on the bio-pirates and companies for agriculture.

What is very worrying is that we are losing the link between seeds and agriculture. Seeds can never be separated from agriculture. That’s why farmers always preserved their own crop seeds. A farmer’s house is not only the store of the grains but of seeds of crops for next season. Farming households are nodal moments of cyclical generation and regeneration of life. If farmers loses seeds, what they will do with their land? If they have to farm the land, they will have to buy seeds from the companies. Think about the country. What the country would do with the terrain without having control over the seeds. Nation, sovereignty, government – all these will have no meaning; because the country is dependent on the profit-mongering companies for food production. 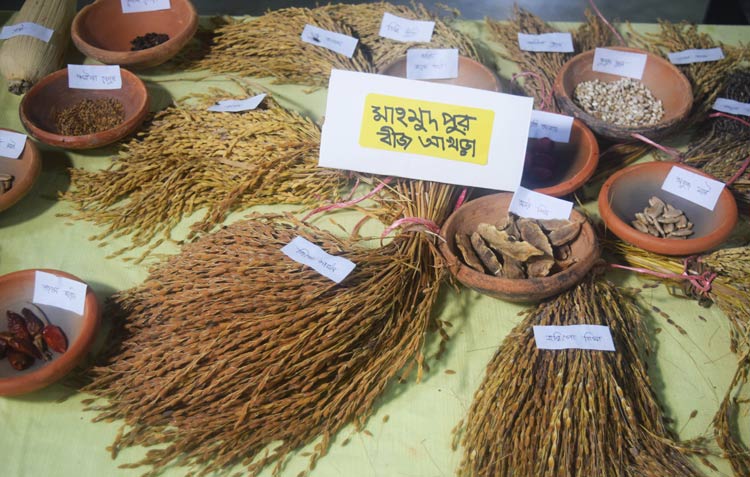 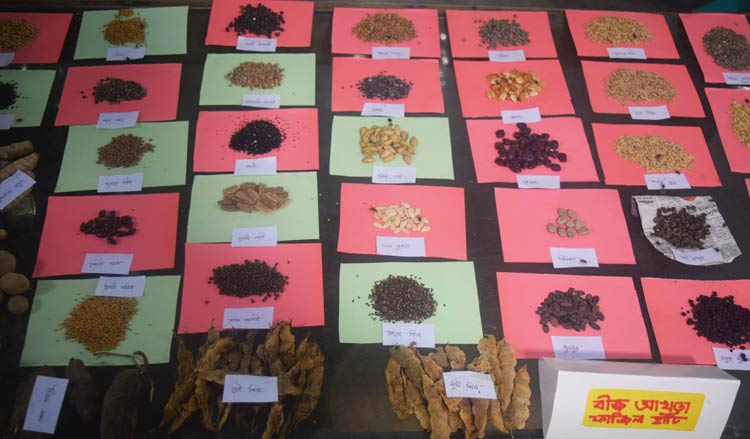 In the age of globalization, there is no more war to capture land, it is replaced by unequala economic relation. Nevertheless there are wars in other countries over oil and natural resources, but here, in biodiversity rich country like Bangladesh, there is an undeclared war on seeds and genetic resources. This war is going on silently through piracy of seeds and germplasm. They are destroying our seed system developed by our farmers and are making us dependent on the companies. Farmers’ lands will lie fallow if they do not have the seeds. Loss of seeds literally means that ownership of farm land will be shifted to the owners of the seeds.

The pirated and patented seeds are numbered. This is a strategy to hide the piracy so that the farmers cannot connect with the names of the seeds they had. We will not be able to identify the parent seed of BR 28 or 29. This is a deception to farmers. Numbered seeds is a means to hide from which pirated genetic materials laboratory varieties had been bred. Control over seeds in national gene banks is also going out from the government scientists to company ‘hired’ scientists. They can use any seed pirated from any country and give a number. So a silent war is going on over the control of seeds. In this war, we can fight back only by preserving our indigenous seeds. Our Nayakrishi sisters have a very popular slogan: “ Sisters, keep seeds in your hands”.

We are now having this meeting in Tangail, a flood plain zone. Here there is a rice variety called Chamara. It used to be cultivated by most farmers, but now the cultivation is not as much like before. This rice is flood tolerant variety, can survive in deep water. Farmers used to say “Maternal uncle (Mama) is the dearest if grandmother (Nani) is alive; Chamara is the best, if there is water is plenty”. We have lost the connection between environment and the crops. Particular land is suitable for particular variety. Soil fertility must be maintained, but fertility is only one aspect of farming and condioned by the bio-reginal ecology and environment. Is it enough to have cowdung for fertilizing the soil? Is there any link between the kinds of trees planted in the area with the soil fertility? There was a time when farmers had this knowledge. But now we are becoming ignorant. We do not believe anymore that farming is the most direct and intimate knowledge practice that engages nature in her totality of existence, and not fragmentarily. In spite of our rich way of living and life affirming lifestyle, we are told that destruction of agriculture is positive, and industrialization is ‘progress’. Destruction of agriculture in order to industrialize is necessary to become “modern” and “civilized”. Civilization, is defined as destruction of the very foundation of life.

It is the farmers who know about the relation with nature through daily interaction. Seeds and crop varieties result from such intimate relation with nature. Farmers are the only source of knowledge of the relation between seeds, biodiversity and life. They can also see the connection between the planets and stars. They have to know about the changes in weather due to changes in the moon, stars in the cosmos. On the other hand those who call themselves “educated and civilized” may not know about these connections. Sun is essential for life. No life form will survive if there is not sun for a second. The trees cook their food – a relation with sun. The trees, plants, herbs and all greens are produced by sun. Other life forms survive on these greens. Scientists call it photosynthesis, for the farmers it is ‘cooking food by trees’. Let the farmers practice science and knowledge in their own ways. And this is a gateway to broader knowledge. Such knowledge practice is the pursuit of Nayakrishi. 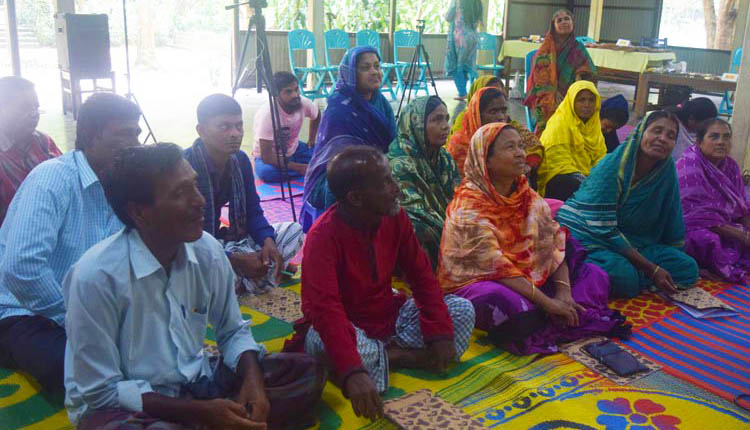 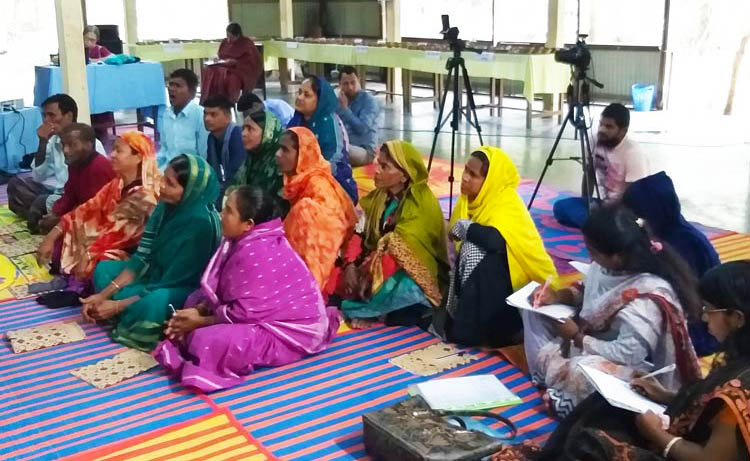 Our foreparents developed 15000 varieties of rice. Don’t you think they knew about dwarf varieties which can have more grain yield? Of course, they did. They had those varieties having higher grain yield. But why they cultivated paddy with longer straws? Because, the dwarf varieties produce food for human consumption only, do not provide fodder for cows or help fertilize the soil. Farmers consciously chose varieties with longer straws to combine human and animal food. The farming household has cows, goats, chicken, ducks, fish etc. On the other hand the modern agriculture promoted high yielding dwarf variety – for very selfish reason, which is also poisoned by use of pesticide and fertilizer. Dwarf varieties are sickening sign of degeneration of ethical values, disregarding of the role of human beings in protecting other lifer forms beside humans.

In Nayakrishi, we do not produce food for only human consumption. For us, agriculture means preserving the biodiversity and the natural environment. We produce and reproduce nature that we call life-affirming generation and regeneration. We have to be aware of the fact that there is an aggressive agricultural method promoted by the corporations with their patented seeds. They have intentionally killed all microbial life forms in the soil and environment with use of pesticides; destroyed the uncultivated greens with herbicides. Companies do not gain profit by ensuring food for other life forms. So except the profit making commodity, rest of the nature must be destroyed. We must unite to resist this destructive intervention.

It is not only the seed varieties that we are losing, we are losing indigenous cows, goats, poultry birds. These were surviving on the farmers household, and they did not require market “feed”.

Lets keep all these issues in our mind when we plan for our farming, design our future. A Nayakrishi farmers’ plan must include preservation of seed varieties that produce fodder, enhance soil fertility, and trees that can help fertilize the land and take care of nature so that all visible or non visible life forms, macro and micro-organisms can survive.

Nayakrishi is for life. We shall prevail.