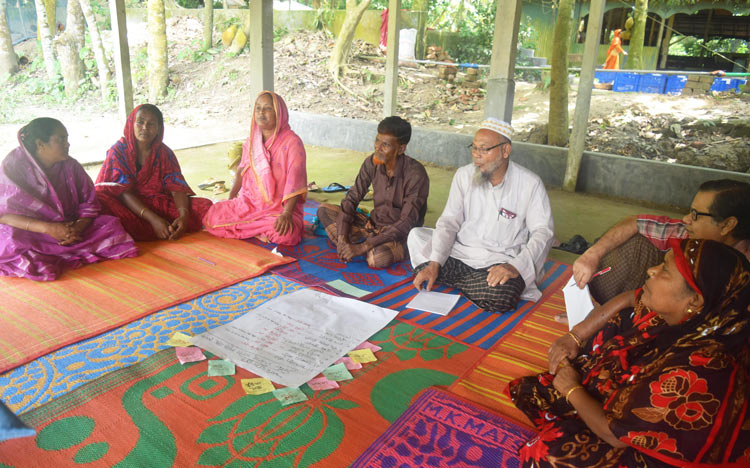 These farmers have been involved with Nayakrishi for long and have been playing active role in management of Seed Akhra.

Nayakrishi farmers are participating agriculture like all other small farmers in the country for subsistence and selling surplus in the market. However, they use seeds of local varieties and do not use any chemical fertilizer and pesticides. Some of them use small amount of chemical fertilizer for cultivation of BRRI dhan 29 variety of boro rice in rabi season. But they do not use any pesticide at all.

Discussion meeting was held focusing Mamudpur Village in particular. 70% of land in this village is low land, 20% is medium and 10% is high land.

It is important to know two aspects for maintenance of crop variety.

In simple terms, it may be said that a particular crop is grown by a few farmers or many farming families and small area of land and big area of land in cultivation. 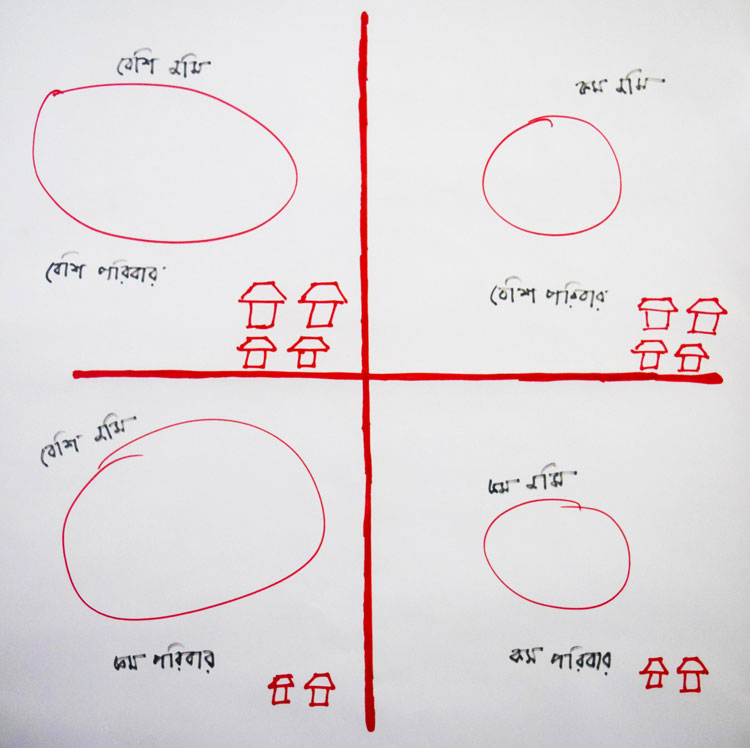 The participating farmers discussed the richness and evenness of diversity, crop by crop are given as follows: 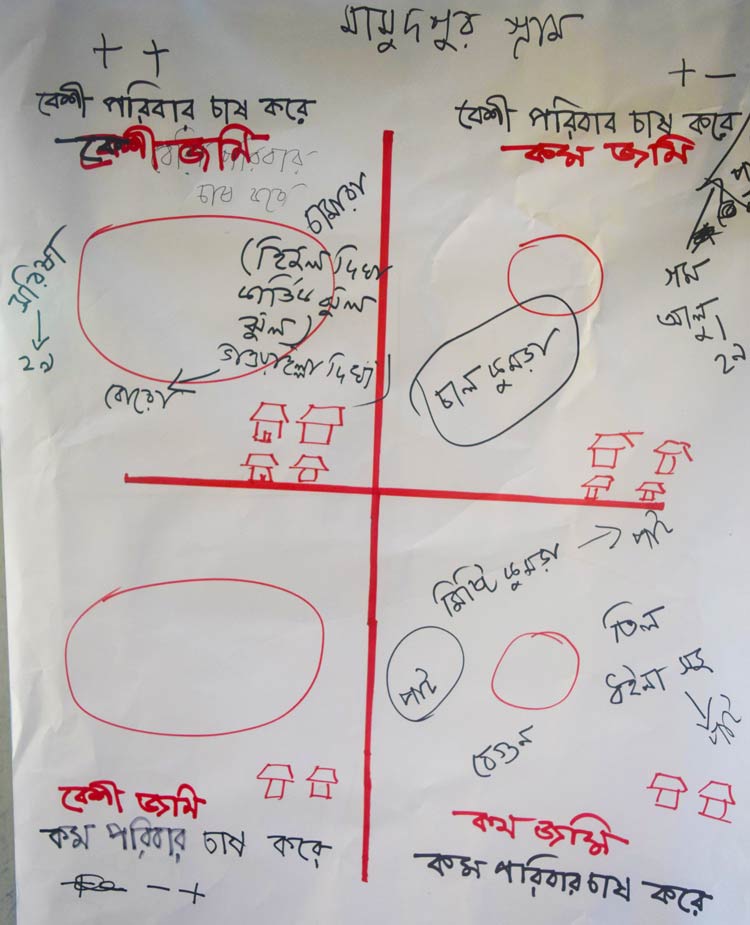 Only two crops including Chamara rice and Mustard are placed in this group. In aman rice season many farmers grow Chamara rice in low land. About 75% of farmers in the villages grow Chamara rice variety. Some other local aman rice varieties including Hijal digha, Kartikjhul and Bhaoaia digha have been grown. These varieties are harvested earlier than Chamara. Most of the land in this village is low and Chamara is specifically suitable for this type of low land.

Maghi mustard is a crop of rabi (winter) season and it is grown in medium and high lands. Mustard is also grown in about 40% of low land. BRRI dhan 29 is a follow up crop in this pattern with mustard:

No crop could be found in this group. This is because there is no rich farmer or farmer having large area of land in this village. Here, all of them are small farmers.

Wheat, potato, ash gourd are there in this group. These groups are very important even though they are grown in small area of land. These crops are grown in highland. The farmers can’t grow these crops for lack of high lands. Recently wheat is gaining importance as an important cereal. This is due to preference of the people for wheat against rice for preventing diabetes. Early variety of potato is preferred by many farmers but they are constrained for want of high land. Ash gourd is also grown in small areas but in many households. It is generally grown in the courtyard and supported on the roofs of houses. Ash gourd is a popular vegetable in the locality. It is used in many delicious recipes.

Sweet gourd, jute, sesame coriander and egg plant are there in this group.

Sweet gourd is grown in the field. It is grown in a mixed cropping pattern with potato. Potato is harvested earlier and sweet gourd remains in the field for long time harvest. Jute is grown as a follow up crop after the harvest of sweet gourd. Jute is periodically harvested for jute leaf as a vegetable and the tall plants are harvested at mature stage for fiber.

High land is needed for cultivation of egg plant. So egg plant is grown only in the homestead high lands.

At about the end of the discussion, an attempt was made to understand the overall condition of the crops. It was revealed that the modern agricultural policy of the government is a challenge for maintenance of many of the local varieties of crops. BRRI dhan 29 is grown by almost all the farmers. Excellent arrangement has been made for irrigation in BRRI dhan 29 fields. Consequently no other rabi crops can be grown in the adjoining plots. This is because most of the rabi crops including vegetables, pulses, oil seeds, spices are grown with seedling moisture without flood irrigation. Irrigation in BRRI dhan 29 fields over saturate the adjoining fields and make them unfit for the whole bunch of rabi crops.

The harvest of BRRI dhan 29 overlaps the sowing tome of jute (mid March - mid May). So, jute as a cash crop is eroding fast.

On the other hand the farmers feel that wheat cultivation is also very important. But the seed of Sonali variety of wheat is scarce. Previously aus rice was a major crop but now it is almost eroded. BRRI dhan 29 is grown in boro (rabi) season which also overlaps the aus rice sowing/planting time. Aus rice is a rain fed crop but BRRI dhan 29 is irrigated. Irrigated BRRI dhan 29 is a challenge to many crops of rabi season and kharif-1 season.