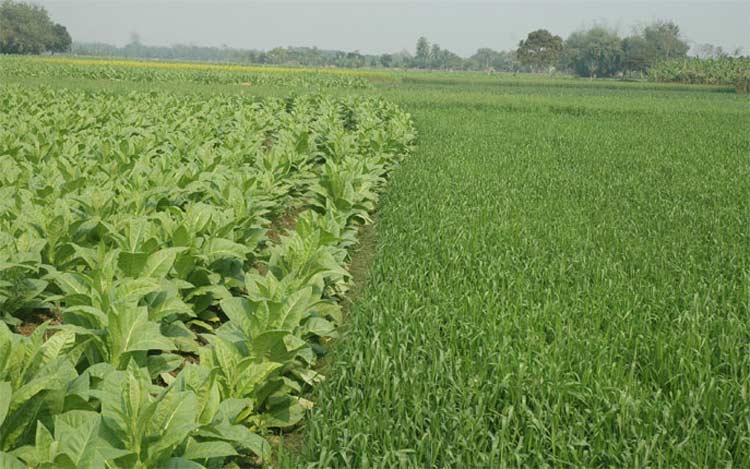 The study was undertaken to investigate the comparative economics of producing alternative combinations of rabi crops by substituting tobacco in Bangladesh. Three most concentrated tobacco growing areas of Bangladesh namely Kushtia, Cox’sbazar and Bandarban districts were selected for conducting the present study. The data were collected through a structured questionnaire from 36 Nayakrishi and 24 tobacco farmers during the present rabi season (2009-10), those were included as sample farmers for the previous study season (2006-07). The prominent rabi crops combinations practiced by the Nayakrishi farmers such as potato + maize + lentil + coriander at Kushtia, potato + french bean + felon at Cox’sbazar and Bandarban were investigated purposively. Data related to rabi crops (combination) cultivation as well as tobacco production were collected from the same crop fields of the respective farmers, those fields were used as sample plots for the previous season. The study unveiled that about 80% higher human labour required in tobacco production and the tobacco farmers paid more than 21% higher wages per man-days compared to rabi crops (combination) cultivation. The tobacco farmers used excessive and imbalance doses of chemical fertilizers and they performed on an average six times to apply insecticides/pesticides in their crop fields at the study areas. The study also revealed that per hectare yield of tobacco was lower during this season than the yield of tobacco in the previous season at each of the locations. On the other hand, the Nayakrishi farmers were utilized their farm and non-farm resources more efficiently during the present season and achieved higher yield per hectare of different rabi crops compared to previous season. The study showed that total cost (full cost) per hectare of tobacco production was more than 119% higher compared to rabi crops (combination) cultivation practiced by the Nayakrishi farmers. Moreover, the Nayakrishi farmers were achieved remarkable net profit from rabi crops (combination) cultivation than tobacco both on full and cash cost basis respectively. They obtained more return Taka 1.42 from per Taka investment by cultivating these rabi crops combinations during this season compared to tobacco production.

The rate of growth in agriculture sector has an important bearing on overall growth of an economy. The agriculture sector, which accounts for 20% GDP, grew by 4.6% in FY 2009 up from 3.2% in FY 2008. The crops and horticulture sub-sector grew by 5.0% in FY 2009 compared with 2.7% in FY2008. Bangladesh is attaining reasonably good economic growth despite the unfolding global recession. GDP grew by 5.9 in FY 2009, slightly lower than 6.2% in FY 2008 because of the moderation in aggregate demand affected by a slowdown in exports and remittance inflows (ADB, 2009).

Bangladesh is a country where poverty rates are among the highest in the world. The HDI for Bangladesh is 0.524, which gives the country a rank of 147th out of 179 countries with data. A study performed by WFP in 2006 found that a relatively large group of extremely poor rural households does not participate in virtually any aspect of the movement toward development and are falling further behind other groups of households. The FAO/WFP crop and food supply assessment mission of Bangladesh (August 2008) estimates that the prevalence of under-nourishment in Bangladesh deteriorated in 2007-08 and is now affecting nearly 35 million people. This highly food insecure population, also referred to as the ultra-poor, has an average daily caloric intake of less than 1805 kcal and spends more than 80% of its disposable income on food.

With respect of food security, the WFP showed that more than half of the food insecure suffer from year-round food insecurity and another 20% had only during one to six month of the year access to adequate food. Most households only ate two meals per day and typically consumed poor quality diets (low in essential macro-and micro nutrients). The WFP report further mentions that 17% of the children throughout Bangladesh are severely stunted, the vast majority of them belonging to the ultra-poor households.

With almost half of the population living below poverty threshold, malnutrition is widespread in Bangladesh. More than one half of the adult women and 45% of the men do not have access to the minimum caloric requirements. Over 50% of infants, 70% of pre-school children, 50% of school-aged children, and 60% of pregnant and lactating women are vulnerable to food nutritional insecurity. Among these vulnerable groups, the rural landless and urban slum dwellers confront the greatest hardships. The consequences of malnutrition particularly micro-nutrient deficiency are severe–generation of children, unable to learn and grow, are nation’s burden instead of its strength. It is therefore imperative that growth in income is essential for poverty reduction, better nutrition and improved livelihood.