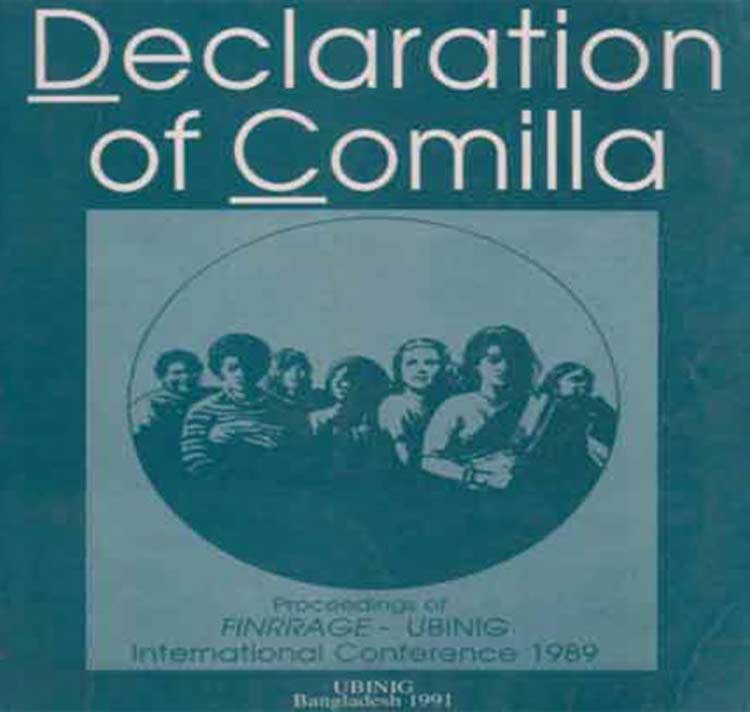 2. Initial experiences with reproductive and genetic engineering all over the world show that these technologies are aggravating the deteriorating position of women in society and intensifying the existing differences among people in terms of race, class, caste, sex, and religion. These technologies also contribute to the further destabilizing of the already critical situation

3. Genetic and reproductive engineering are part of an ideology of eugenics which we oppose. In this ideology, human beings are viewed as inherently inferior or superior. This leads to degradation, discrimination and elimination of oppressed groups; be they women, disable, people of certain colors, races religions, class, or caste. Similarly, traits of animals and plants are arbitrarily valued as being desirable or undesirable and become subject to genetic manipulation. Eugenics justifies the political strategy used by those in power to divide and rule.

4. Women from the participating countries described how eugenic ideology and racism are the basis of population control policies. We resist population control policies and methods. They hide the true roots of poverty as exploitation by the rich. They reduce women to their reproduction organs. We object to women being used as experimental subjects by science, industry and government.

5. Genetic and reproductive engineering, as well as population control, are introduced and promoted on the grounds that they solve problems such as hunger, disease and pollution. In reality, however, they divert attention from the real cause and are incapable of solving these problems. Nor do they reflect women's demands and needs.

6. Genetic and reproductive engineering claim to offer unlimited control over all live forms, but tinkering with genetic codes opens up a truly uncontrollable situation of "runaway designer genes'' and unintended consequences. These changes will be particularly hazardous because a chain reaction will be set in motion which cannot be traced back its origins. The effects produced cannot be countered. They will be irreversible.

7. In our increasingly materialistic and consumer oriented world, genetic engineering is promising unlimited diversity. But to live in a man-made patriarchal world where everything has been tampered with will be to live with the ultimate limitation. Our present finite world of resources offers a richer diversity than that promised by genetic engineering with its selective, eugenic, and patriarchal philosophy.

8. Genetic and reproductive engineering are a product of the development of science which started off by viewing the whole world as a machine. Just as a machine can be broken down into it's components, analysed and put back, living beings are seen as consisting of components which can be viewed in isolation. Aspects of nature which cannot be measured or quantified are seen as subjective and of no value and are therefore neglected. In there ignorance or disregard of the complex interrelationships in life, scientists collaborate with industry and big capital and believe they have finally acquired the power to create and reconstruct plants, animals, other forms of life and, possibly soon, even human beings.

9. We oppose this partriarchal, industrial, commercial and racist domination over life.

10. In our work of bearing and raising children, caring for the sick or disabled, growing, preserving food, materials for clothes and other basic human needs, we women have developed and passed on for generations a wealth of Knowledge and skills about dealing with all of nature in a compassionate, humane, and ecological sustainable way. We realize that this Knowledge and these skills, as well as the contributions of women to the arts, crafts, culture and social relations are generally not recognized as having value in mainstream science, philosophy, or technology. But these have been, and still are, vital for the survival of human beings and all of nature. They are valuable human achievements and resources. We want to renew, reaffirm and build upon this female tradition.

11. We strongly believe that reproductive and genetic engineering cannot meet the needs of women or enhance their status in today's societies. We therefore demand the participation and recognition of women in all spheres of life. We want women to have access to resources, income, employment, social security and a safe environment at work and at home. Quite fundamentally, we demand living and working conditions that assure a life of human dignity for all women worldwide.

12. We demand access for girls to practical knowledge, resources, and skills that are in women's best interest and further women's well being. These include an education about taking care of primary health needs including nutrition. This will empower women and increase women's general health, reduce morbidity and mortality of women and children. Such primary care will reduce the number of children born with mental and physical disabilities and also reduce infertility.

13. We demand Knowledge and access to safe contraception which does not harm women's bodies. We reject any coercion, be it through force, incentives or disincentives, in the name of population control policies, such as enforced sterilisation particularly in camps and in target-oriented policies, We demand a stop to the use of dangerous IUDs, unsafe injectables, hormonal implants, such as Norplant, and other hormonal contraceptives as well as anti-fertility vaccines.

14. We support the recovery by women of knowledge, skill and power that gives childbirth, fertility and all women's health care back into the hands of women. We demand recognition, support and facilitation of the work of midwives and reestablishment of midwifery services under the control of women.

15. We demand literature be distributed and education be given about the adverse effects of all contraceptive methods.

16. We demand contraceptives for men be developed and that men also be made responsible for contraception.

17. We demand the United Nations and the governments of the respective countries stop population control policies as preconditions for developmental aid.

18. We support the exclusive rights of all women to decide whether or not to bear children without coercion from any man, medical practitioner, government of religion. We demand that women shall not be criminalized for choosing and performing abortion.

19. We oppose the medicalization and commercialization of the desire of women for motherhood.

20. Internationally, we demand that conditions be created under which social parenthood in a variety of forms meets the needs of children and people who wish to care for children. In particular maternity and child care should be a social concern rather then the responsibility of individual women.

21. We condemn men and their institutions that inflict infertility on women by violence, forced sterilization, medical maltreatment and industrial pollution, and repeat the damage through violent "repair" technologies.

22. Given the continuing deterioration of women's lives through the application of patriarchal science and technology, we call for an international public trial on medical crimes against women to be organized by women.

23. We demand research into the prevention of infertility as well as an end to the stigmatization of the infertile. Infertility needs to be acknowledged a social condition and not as a disease.

24. We protest the use of in vitro fertilization in countries that wish to increase or decrease births. It is a dangerous dehumanizing technology. It uses women as living test sites and producers of eggs and embryos as raw material to enable scientists to work towards further control over the production and quality control of human beings and international business to accumulate profit. Furthermore, it is a failed technology which also takes away resources from basic reproductive health needs.

25. The social discrimination against women is aggravated through the technologies of sex determination and sex preselection resulting in a growing adverse sex ratio in some countries. We demand a ban on such applications of these technologies.

do not offer the solution for disability. Instead we demand the elimination of hazardous drugs, radiation, hazardous chemicals at the workplace and in the environment and a solution to the problems of malnutrition and preventable infectious diseases.

28. We condemn any national and international traffic in women, Eggs an embryos, human embryos, human organs, body parts, cells of DNA (genetic substance) especially for purposes of reproductive prostitution which exploits women as human incubators, in particular poor women in poor countries. We also strongly protest against the existence of "body farms" and commercial adoption and surrogacy agencies.

29. We oppose the deliberate release of genetically manipulated organisms worldwide because of its unpredictable and irreversible effects on environment and health. We also consider the use of genetic engineering in laboratories and factories (biotechnology) to be tantamount to deliberate release, because genetically manipulated organisms can be released accidentally.

30. Deliberate release of genetically manipulated organisms and safety standards in factories and research institutions are of international concern and cannot be decided by certain governments only. The impossibility of democratic control of genetic engineering on a national and international level leads us to reject all forms genetic engineering.

31. We strictly reject any laws which allow patenting of life forms and processes utilizing life forms.

32. We condemn the use of poor countries as test-sites for genetically engineered organisms or other products of genetic engineering such as bovine growth hormone, rabies vaccine etc

33. We fear that the development and application of gene technology in agriculture will repeat and aggravate the damage done by the green revolution; in particular that it will increase the economic dependency of poor countries on rice countries and concentrate power in the hands of a few, both nationally and internationally.

34. We demand an end to technologies and policies which result in natural food being converted into more expensive unnatural food.

35. We oppose the criminalization and repression of women who are critical of genetic engineering and reproductive technologies or who are against the dehumanizing technologies.

36. We want appropriate technologies that do not violate human dignity and relations. We want them to be reversible, that is to be error friendly and contribute to preserving biological, cultural and social diversity of all living beings. The technologies must be suited to collective decision making and democratic participation and control.

37. We women gathered here are natural and social scientists, doctors, lawyers, health activists, journalists, demographers, development workers, community organizers, teachers, social workers, academics, who have been actively involved in issues related to women, health, human rights, education, responsible science, technology and agriculture with a women-oriented perspective in both professional and political work. Having shared our experiences, insights and knowledge, we reaffirm our deep commitment to continue and intensify our work towards a humane and just world for all. We will continue this work, despite the numerous restraints and increasing repression, both political and professional, which we face.

38. We appeal to all women and men to unite globally against dehumanizing technologies and express our solidarity with all those who seek to uphold and preserve the diversity of life on our planet and the integrity and dignity of all women.