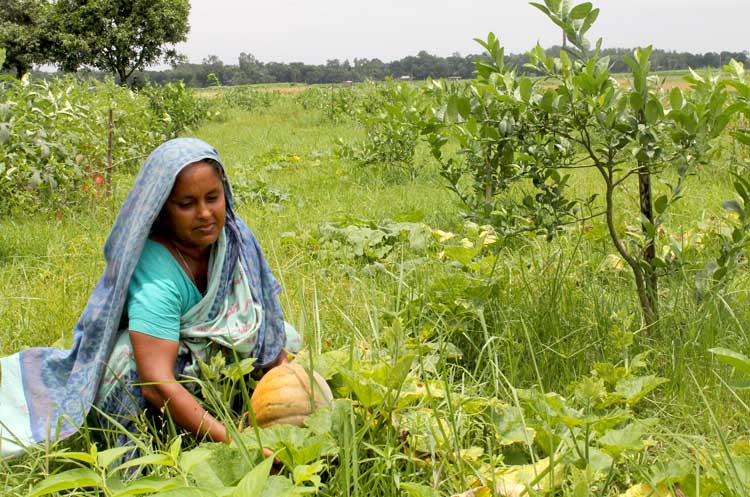 Global Green New Deal is on the road to make growth look green. How green it is for the southern countries; is an extremely important question. Policy Brief of United Nations Environment Programme (UNEP March 2009)) on Global Green New Deal (GGND) is about the "worst financial and economic crisis'' and raises the question whether the response of financial stimulus of US$3 trillion globally is sustainable. UNEP recommends a green stimulus of 1% of global GDP (approx. 750 billion), which is only one-fourth of the total proposed fiscal stimulus could provide a critical mass of green infrastructure "needed to seed a significant greening of the global economy". However, the focus of the green stimulus is on growth, jobs and tackling poverty. The objective is also to reduce carbon dependency and ecosystem degradation.

In this respect, the Green New Deal is apparently in favour of the southern people. But from the perspectives and experiences of the livelihood and survival of billions of people in the south, seeking alternative to the growth model from ecological and environmental perspectives it is not satisfactory.

The New Deal of Roosevelt demonstrated the un-sustainability of the industrial fossil-fuel based societies and there is hardly any option left to ensure energy security for their survival even through military means. It seems that the western countries do not want to reduce over-consumption and change their oil based life style. The growth model of the north is destructive, while the south has survived the way it is related to nature in generating life, life styles and the future. The imposition of the growth model by Breton Woods Institutions in the developing countries had negative consequences. So it is not possible to talk about any 'deal' without fundamentally reviewing the conception of economy, ecology and lifestyle and putting the efforts to construct a vision and science that starts to link these already obsolete sciences that claim independence from each other, while they indeed are integral to the very activity of human beings that build civilisation. The new deal must be the deal for post-industrial, post-capitalist green civilization.

In the early sixties of the 20th century, the World Bank made conditional loans to the developing countries to adopt “modern agriculture” – a package of chemical fertilizers, pesticides, irrigation system with diesel or power in the name of achieving higher yields and thereby attaining food self-sufficiency. By 'food' World Bank meant cereals and the focus was on the staples. As a result while cereal production increased in some cases in countries like Bangladesh, but oil seeds, lentils, forest products and in general the biomass -- a major source of energy in the rural areas have decreased. Agriculture does not only produce food, it also produces fuel woods, fibers, medicines, construction materials, etc. The modern agriculture destroyed food sources that people could easily collect without cultivating. The fish and aquatic resources have been destroyed by chemicals, pesticides and unsustainable urbanisation dumping waste into rivers and agricultural lands. This has proved a disaster for countries like Bangladesh. Food insufficiency still remains an acute problem, while the rural environment is destroyed due to excessive use of chemicals. Problem now, is not only insufficiency of food, but the deterioration of basis of food production -- the environmental and ecological erosion of the land, rivers and water bodies.

After the failure of the Green Revolution 1, the biotechnology industry is promoting and facilitating the proliferation of genetically modified organisms in food and agriculture. This step is going to accelerate the biological pollution in countries that are still rich in biodiversity and genetic resources, being the spot belonging to Vavilov center of biodiversity origin.

Fossil fuel projects extract a heavy toll on people and the planet, leaving toxic legacies of social injustice, degraded water, land and air, and global warming pollution. Yet the World Bank Group fundedover $3 billion in fossil fuels between 2007 and 2008. Despite professed concern regarding climate change, the World Bank Group increased its fossil fuel lending by 94 percent. Lending for coal – the dirtiest of the fossil fuels - increased 256 percent.

The 'Green New Deal' is a new multimillion dollar initiative – which is being already funded by the German and Norwegian Governments and the European Commission. It argues that the world is caught up in not one, but three interlinked crises of food, fuel crunches and financial ones.

Soaring prices of grain and oil, have stemmed from short term exploitation of the world's resources, without considering how they can be used to sustain prosperity in the longer term. According to UNEP, over the last quarter of a century, world growth has doubled, but 60 per cent of the natural resources that provide food, water, energy and clean air have been seriously degraded.

Putting economic tags on the 'services' we receive from the ecosystems function, may be a useful way to convince the policy makers on the value of natural and biological world that does not enter into strictly economic relations. Achim Steiner, UNEP's Executive Director, said that every year, the felling of forests deprives the world of over $2.5 trillion worth of such services in supplying water, generating rainfall, stopping soil erosion, cleaning the air and reducing global warming . By comparison, the global financial crisis is so far estimated to have cost the world the smaller one-off sum of $1.5 trillion. The world market for environmental goods and service already stands at $1.3 trillion and is expected to double over the next 12 years even on present trends.

Mr. Steiner wanted to convince the global leaders to switch direction to concentrate on 'green growth', claiming this will not only prevent financial catastrophes, but will rescue the world's finances. The new, green economy would provide a new engine of growth. This is about growing the world economy in a more intelligent, sustainable way.

It is disappointing to see that the premise of profit-based competitive capitalist global architecture is not under question, although there is more willingness to listen to new solutions. Unfortunately the new solutions are again 'development' from the top and essentially a proposition to improve the quality of the development financing to achieve the Millennium goal.

Needless to mention that global financial crisis has global consequences. It will exacerbate poverty and will accentuate social risks and costs. This is where countries like Bangladesh may hope to get some benefits from Global Green New Deal since the suggestion is to invest in securing fresh water, providing sanitation, and optimizing agricultural productivity through sustainable methods. The determination to ensure that “post-crisis” economy follows a sustainable model and does not continue to add to the two most significant risks faced by society: ecological scarcity and climate instability is obviously directly related to the concerns of the people of Bangladesh.

There is a trade-off between economic development and environmental stewardship. Environment, ecology and biological foundation of life can not be eroded in the name of development, since these are also economic assets. Consequently a responsible framework is necessary for using environmental assets. This is particularly true about the poorest populations as they depend disproportionately on the ecological commons both for livelihoods and for consumption.

In short Global Green New Deal aims to reduce carbon dependency and ecosystem degradation and a wish to put the global capitalist economy on a path to clean and stable development. But this is not shift from the 'growth' paradigm and does not fundamentally question the main drive of the capitalist economy -- profit and greed. 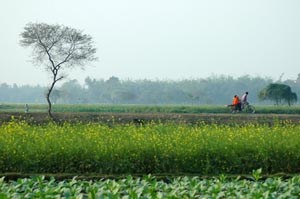 A major activity of Nayakrishi Andolon is to transform the tobacco fields to food production. The picture above shows how a village is changing. Even in 2006 the whole field was full with tobacco plants. The traces are there, but the the positive result of the farmers are very visible and impressive.

Nayakrishi Andolon, literally meaning New Agricultural Movement, is also not returning back to the pre-industrial, pre-capital or feudal form of society, but rather a futuristic approach to the possibility that has been created by the major advances in science in general and biological science in particular as well as the movement insists on addressing ethical and political issues of our time.

In the GGND, sustainable agriculture is seen as an area of "investment" and its contribution would be creation of 'employment'. For us, agriculture is a source of livelihood, far beyond the notion of employment. Agriculture is integrally related to many other occupations such as potters, blacksmith, weavers, fishers etc. and it involves the entire family, not only one single person as the main breadwinner. Therefore, Nayakrishi is empowering for women as they become the most important contributing members of the families.

Seed keeping, the most important task of women have been destroyed through promotion of company seeds. Growing food by farmers is integral to keeping seeds for generations. Farmers regenerate and expand their biodiversity and genetic base. Threat to farming can come from agricultural policies and practices that deprive the farming communities control and command over seed and genetic resources.

The Green New Deal does not talk about seeds in the context of sustainable agriculture. We must remember, the corporations are now controlling the seed market. With more and more technological interventions in the seed the seed savers are replaced by multinational corporations. According to Godoy, ‘twenty-five years ago, there were at least 7,000 seed growers worldwide controlling less than one percent of the global market. Today, 10 major biochemical multinationals, including Monsanto, DuPont-Pioneer, Syngenta, Bayer Cropscience, BASF, and Dow Agrosciences, control more than 50 percent of the seeds market’ (Godoy , 2008). The hundreds of thousands of seed savers, mainly comprising of women never claimed control over the seeds, rather tried to regenerate and exchange among the farmers. When the corporations are controlling the seed market, it is patented without having any knowledge on the seed and only selling for profit.

The rice varieties that were available with the farmers and the communities in Asia are now found in the IRRI Gene bank. As Peter White puts it, “The building blocks for this science-directed evolution are the seeds in cold storage at IRRI’s Genetic Resource Centre – some 80,000 rice samples (White 1994). A huge collection of seeds is stored in U.S. Department of Agriculture National Seed Storage Laboratory at Fort Collins, Colorado, containing around 250,000 samples (Ausubel, 1994). The seeds are stored in freezing conditions, not being regenerated in the farmers’ field, therefore, have posed more threat of extinction than in the farmers’ field or in the wild.

The new phenomenon is that the Global seed collection has shifted to private hands. The Microsoft founder Bill Gates is funding, $30 million to the first international centralised seed bank holding some 165,000 varieties of the 21 crop plants (Acharya, 2008). It is the Svalbard Global Seed Vault, or the Doomsday Vault as it is called by the media, is built into the Arctic permafrost, with a natural temperature of minus 6 degrees centigrade, some 1,000 km away from the North Pole. It has three cold rooms further cooled to minus 18 degrees C and is capable of storing 4.5million batches of seeds. The Norwegian government has built the Svalbard Global Seed Vault, to provide this so-called “ultimate safety net” for the world’s seeds. To a Nayakrishi farmer, this is nothing but centralised control over seeds without access of farmers to the seeds. On the other hand, Nayakrishi farmers keep seeds in their own houses and in the community seed wealth centers. The simple technique of seed keeping based on thousands of years of experiences is a real challenge against the global seed vaults. Farmers, particularly women, are the real custodians of the seed in the farming communities (Mazhar, 2008).

Ausubel, 1994. Seeds of Change: The Living Treasure; The passionate Story of the Growing Movement to Restore Biodiversity and Revolutionize the Way we think about by Kenny Ausubel, Harper SanFrancisco, 1994