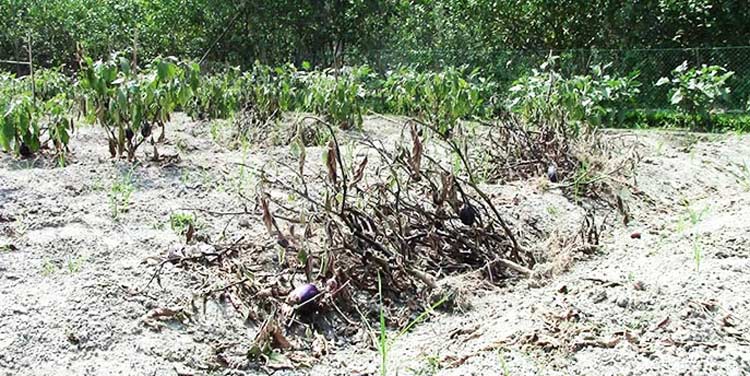 A policy research group has concluded that the GM crop was a “miserable failure” in its second year of cultivation. Claire Robinson reports

Bt brinjal (eggplant) has proved a “miserable failure” in its second year of cultivation in Bangladesh, according to a new report by the development policy research group, UBINIG. Unimpressed by claims that Bt brinjal has proved a boon to farmers, the group conducted its own field investigations and concluded that this GM crop is on “life support”.

The UBINIG investigators obtained a list of 110 farmers growing Bt brinjal made by the Bangladesh Agricultural Research Institute (BARI), which is managing the Bt brinjal project in the country in collaboration with Cornell University. UBINIG was able to collect data from 79 – about 72% – of the farmers, who were spread among all of the 19 districts in which the crop was grown.

The UBINIG researchers found that the GM Bt brinjal crops were nannied through their short lives by officials from BARI and the Bangladesh Department of Agricultural Extension (DAE). Their report says, “During the field cultivation the farmers were extensively supervised by BARI and DAE officials. The DAE officials at Union, Upazila and district levels visited daily or at least weekly and supervised the growth of the plants.”

UBINIG adds, “According to the farmers, most of the time, the officials took care of the plants themselves as they had to show a good performance.”

According to UBINIG’s investigation, the officials even replaced failing plants with new ones. If UBINIG is correct, this is completely contrary to good practice for a scientific trial and in itself would be enough to render the results worthless. It remains to be seen whether the researchers declare this practice in any paper that they publish on the experiment in a peer-reviewed journal. If plants were replaced and the researchers keep quiet about it, that could constitute scientific fraud.

The British author and GMO promoter Mark Lynas has claimed that Bt brinjal “requires drastically less pesticide than is conventionally applied by farmers to brinjal”. According to UBINIG, the crop was hyped to farmers as the “no-pest brinjal".

However, the reality was very different. UBINIG reports, “The farmers had to use huge amounts of pesticides recommended by the supervising authorities of BARI and DAE. These included Comfidor, Ektara, Admasar, Dithen M-45, Bavistin, Thiovit, Basudin, Furadan, Borax, Demsa granular, Vim powder, Admire, 200sl (Bayer CropScience), bleach powder, Heckel, Salclox, Diazinon, etc. There were many other insecticides and fungicides sprayed, as provided by DAE. In the booklet of BARI, organic pesticides such as Neem seeds, Neem oil, powder soap, Trix, and the chemical pesticides Malathion, Omite, and Baviston were suggested for different pest/disease attacks.”

UBINIG states, “Thirty-five types of pesticides, including acaricide [kills ticks and mites], insecticide, and fungicide, were sprayed several times in the Bt brinjal fields”, on the direction of the supervising officials.

Even banned insecticides were used

Five banned insecticides were used on Bt brinjal, including Basudin, Bidrin, Dursban, Diazinon and Furadan. These banned insecticides were used in farmers’ fields in Gaibandha, Kushtia, Manikganj, Mymensingh and Sherpur districts. Thirty other pesticides used in Bt brinjal fields were not from the list of 76 pesticides officially recommended for brinjal crop production in Bangladesh.

Why the chemical arsenal?

UBINIG found that Bt brinjal fell victim to a number of pests and diseases – not just bacterial wilt, a problem that even BARI admitted to – but a variety of viruses, fungal infections, insect pests, and mites. Viruses included tulshi and mosaic viruses. Fungi appeared as root rot, stem rot, wilt, leaf spot and fruit rot. Farmers reported heavy infestations of whitefly and aphids in the Bt brinjal. There was also an infestation of red mites.

Bt brinjal was claimed to be profitable because the yield would not be impacted by the fruit and shoot borer. However, UBINIG says the yield did not live up to the expectations of farmers.

Farmers were given signboards to advertise their GM Bt brinjals in the market as “pesticide free” – a lie, given the high usage of pesticides reported. The brinjals were not labelled as GM, in violation of the terms of approval by the Bangladesh government. UBINIG reports that farmers found it difficult to sell Bt brinjal because it lost freshness more quickly than normal brinjals. Most of the farmers ended up eating the Bt brinjals at home, but the taste was “not liked”.

UBINIG collected statements from farmers who grew Bt brinjal in the second year. One called it a “worthless crop”; another said he would not grow it again and would tell other farmers to stay away from it. A farmer in Pabna, Shamsul Haque, said: “I cultivated Bt brinjal with the hope of earning a good return. But in reality I have a big loss… The DAE officers were right in their statement that there is no fruit borer in Bt brinjal. The fact is that there was no fruit on the plants of Bt brinjal. So there is no object for fruit borers to be there. My land is very fertile. I had lot of options for crops. I incurred a loss of Tk. 15-20,000. So I swear I shall not grow Bt brinjal in future.”

Out of 79 farmers in different districts, 58 (74%) declared that due to the losses they had incurred, they would not cultivate Bt brinjal again in the future. Sixteen (20%) of the farmers said they would do so only if the BARI or DAE provided all the support. Only one farmer showed an interest in growing Bt brinjal again.

No toxicity information has been published on the Bt brinjals that were cultivated in Bangladesh. However, animal feeding trials commissioned by Mahyco, Monsanto’s Indian partner, revealed organ damage in rats fed similar Bt brinjals. Epidemiologist Dr Lou Gallagher, who analysed the industry tests, concluded, “Release of Bt brinjal for human consumption cannot be recommended given the current evidence of toxicity to rats in just 90 days and the studies’ serious departures from normal scientific standards”.

Background of secrecy and deception

The second year of Bt brinjal cultivation in Bangladesh has taken place against a background of secrecy and deception.

The chief mystery is why it was planted at all. This is because Bt brinjal was widely recognised as having suffered widespread failure in its first year of cultivation, with angry farmers demanding compensation.

According to UBINIG, BARI did not issue any report on the performance of Bt brinjal in the first year of cultivation, leaving the industry lobby group ISAAA as the only body to report on the results of the experiment – and ISAAA’s report is hidden behind a paywall.

UBINIG says the second round of cultivation was “not based on any request or demand from the farmers”. A new group of farmers was recruited who did not know anything about GM Bt technology and were not “aware of the debates and the experiences of the farmers” who had already incurred losses in the first round of field cultivation.

In view of all the problems with Bt brinjal, UBINIG likened it to “a patient in an intensive care unit under life support”.

The image at the top of this article shows the half-barren Bt brinjal plot of the farmer Abul Hossain of Dhanua, Narsingdi, supplied by United News of Bangladesh journalist Faisal Rahman (see also http://gmwatch.org/news/latest-news/16320)