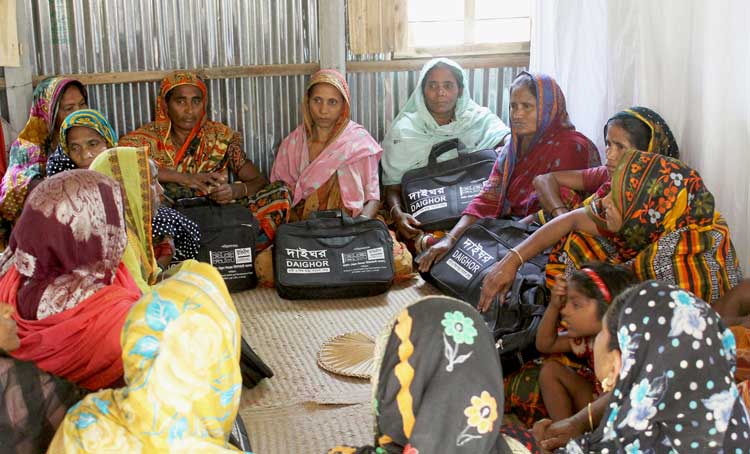 UBINIG from its rural centres formed a network of Dais having a membership of over 400 and with them has been raising the question of proper understanding of the role and recognition of Dais. Enhancing their knowledge, skill and performance and helping them to learn and acquiring new skills are major focus of UBINIG’s work with Dais. Narigrantha Prabartana got involved in the work of dais through it works on women’s health issues. The conference of Dais was organised by Narigrantha Prabartana with participation of more than 300 dais.

This project started in May, 2007 with distribution of kits in 9 districts to 200 Dais. It will end in September, 2007 with a meeting of the representatives of Dais receiving kits.

The Dai kit is a tool box for the Dais, which contains most important items needed during their service in helping pregnant women in child delivery. Most poor women do not have necessary clothes or blades. The Dais are also from poor economic background, therefore they cannot help the women with clean clothes and thereby feel helpless in ensuring safety in the delivery of the babies.

Items in the Kit: The kit is a waterproof bag having 1 umbrella, 1 torchlight, one yard of plain cloth, a packet of blade, Nail Cutter, one yard Polythene sheet, Hand washing Soap and 1 bottle Savlon.

The selection of the items was done through discussion with Dais in different areas. There were some other suggestions such as Mug for water and a pan for boiling water. But these could not be done because it would be expensive and cannot be kept in the bag. In the proposal the cost per bag including the items was Tk. 706, but in the real situation it was Tk.810.

Since in each of UBINIG Nayakrishi areas, there has been relationship with Dais, some preliminary meetings were held before distribution of the kits. It was proposed the Dais would form a cooperative group called “Nayakrishi Dai Samity”. The dais would also follow ecological agricultural practices and receive training of Nayakrishi. 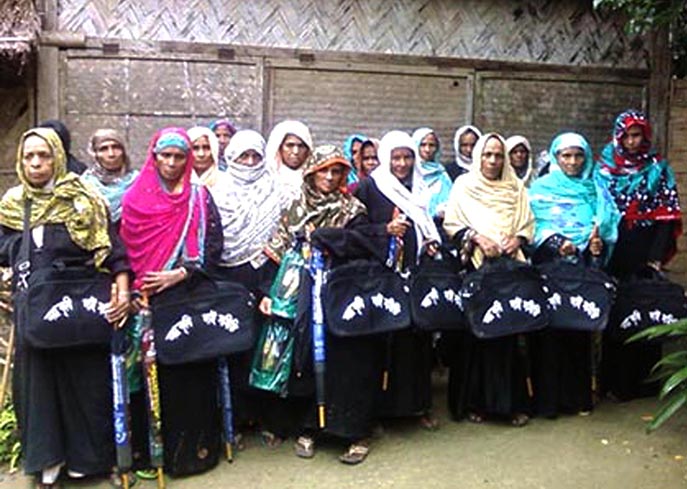 They will hold monthly meetings and discuss on women’s health issues and evaluate the use of the Dai kit. They will deposit Tk.10 per month in the Samity fund. This money is kept with the Dais and they will manage any cost related to running of the samity with their own funds.

The distribution of the kits is completed in the following districts:

* In Dhaka the Dais from different slum areas keep contact with NGP.

Anecdotes on Responses after receiving the kit:

Overall, the response was that the Dais felt very happy because it will make their work more professional. Rahatun nesa of Kushtia said, we have demanded for this bag long time ago. Now we have received it. We are very happy. It will be very helpful for us. The poor women in the villages cannot give us a soap to wash our hands. At night we find it difficult to go to the villages when we are called. The torch will help us. When it rains we have to get wet, now the umbrella is there. We are not worried anymore. We use torn mats for women to lie down, but now the polythene sheet will b very useful.

However, Maleka Begum of Tangail first could not understand why the plain cloth was given. She said, Is it for my blouse? Every one laughed. It was for covering the woman with a clean cloth.

Dulali Begum of Chapainababganj said, we had to ask for everything to the family. Now we are quite self sufficient. W can perform our duties better.

Following on the distribution of the Dai kit box containing essential equipment to the Dais based on their demand during a conference of Dais held in December, 2006. The conference was supported by Primate World Relief and Development Fund (PWRDF) Canada. Action Aid Bangladesh in continuation of these activities a daylong meeting of the Dais was held at the Narigrantha Prabartana on 2 September 2007. The meeting was moderated by Sayyida Akhter, Coordinator, Narigantha Prabartana. Dais representatives from different districts, NGO representatives, Health workers and researchers attended the meeting.

To prticipate in the meeting in Dhaka, the Samity members held meetings in their respective areas and discussed about the use of the kit boxes and their works in general.

a) Number of babies delivered by each midwife.

b) Constraints faced in case of complicated deliveries, and the way out pursued in such complicated cases.

c) Attributes of medicinal plants and their uses.

g) Advice of nutritious food for pregnant and lactating mothers.

Women other than the Dais also attend these meetings. Main principles of Nayakrishi and common health problems of women are also discussed in these meetings.

The essential equipment contained in the kit box for the Dais include: a blade, disinfectant, nail cutter, polythene sheet, cloth, torch light, battery, soap, umbrella and an identity card. These items are needed at one or the other stages of delivery. The Dais are mainly called for delivery in the relatively poor families. Generally such families do not have any of the items needed at the time of delivery. An expecting mother is made to lay on a piece of chat (Hessian cloth) or a heap of rice straw. In general these are very dirty and as such there are risks of infection. These problems have been solved through provision of polythene sheets. There is a lack of a piece of clean cloth in many families for holding the newborn baby just after birth. Now the Dais use the cloth provided in the kit box for holding the babies. The Dais clean their hands with the soap. They also make their hands free from germs with the help of the disinfectant. They use the nail cutter for cutting their nails. The torch light shows their way to the deserving mothers. The umbrella protects the Dais from rain and scorching rays of the sun in course of their duties. But unfortunately many members of the 'Nayakrishi Dai Shamity' could not be provided with the kit box yet. However, they perform their duties by borrowing from others who have got it fortunately.

The demand of the members of the 'Nayakrishi Dai Shamity" has increased in the locality compared with other Dais. They are now more called for delivery cases and consulted during pregnancy of the expecting mothers. The general public is also happy and confident for the Dais having the kit box. The Dais are now more equipped for performing their jobs safely. As a result the mother and child are more secured. The general public is interested to know about the 'Nayakrichi Dai Shamity' when the Dais pass on the streets with the kit box in hand. They also like to know about the contents inside the kit box. The label on the kit box, 'Nayakrishi Dai Shamity' attracts the alteration of the public. A lady with the kit box in hand is indicative of the identity that she is a recognized Dai.

1) The money from the savings account of the 'Nayakrishi Dai Shamity' will be used for Adhi System (Share rearing of cows or goats).

2) Issue Pass Book of Savings for the members of the 'Nayakrishi Dai Shamity'.

3) The Dais from Non-Nayakrishi villages may be enrolled as members of the Nayakrishi Dai Shamity after offering them training in Nayakrishi.

4) Gauze cloth will be included in the list of equipment for future distribution of kit box.

5) Herbal Healer Women (kabiraj) have also expressed their interest to be members of the 'Nayakrishi Dai Shamity'.

6) There is need for increase of the number of kit box for the Dais.

7) A National Convention for Dais is urged.

The Dai mas have got their due recognition through the formation of the ‘Nayakrishi Dai Shamity’ and they felt that their status has been upgraded. The women, particularly the poor women, in the villages felt secure about safe delivery.