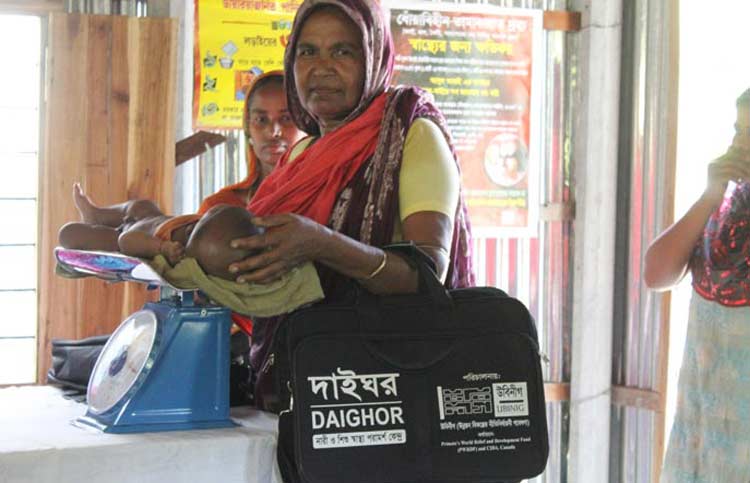 Maternal causes account for 14% of all the causes of deaths among women of reproductive age. According to Bangladesh Maternal Mortality Survey, 2010 haemorrhage and eclampsia are the dominant direct obstetric causes of death, together responsible for more than half of the MMR followed by Obstructed or prolonged labor (7%) and abortions (1%).

Indirect obstetric causes of deaths account for about a third (35%) of maternal deaths.

Child Delivery: Only 23% of women are delivering in a facility, mostly in private sector (11%) a government sector (10%) and NGO facility (2%). Only 18% of all births were delivered by a medically trained provider, which includes qualified doctors, nurses, midwives, paramedics, family welfare visitors (FWVs) and community skilled birth attendants (CSBAs). The rest (about 70%) are delivered by Traditional Birth attendants known as Dais. Still 2.4 million women deliver at home. However, seeking treatment for complications has increased to 29% indicating that both awareness and referral systems are improving. Long-term illnesses include obstetric fistula (1.69/1000 ever married women), uterine prolapse, perineal tear, vaginal stenosis, urinary incontinence etc. Obstetric fistula is the most devastating maternal illness. Fistula repair surgeries, prevention and rehabilitation services should be expanded from the 10 Government Medical college Hospitals (including the National Fistula Center at Dhaka Medical CollegeHospital) and 4 private hospitals.

This is a Primate World Relief and Development Fund (PWRDF) coordinated project funded by Canadian International Development Agency (CIDA) under the Partnership with Canadian Branch (PWCB). The main focus of the project is to support Canada’s Muskoka Initiative to achieve development results that will improve maternal, newborn and child heath through accessing to basic health service. This initiative will contribute to Bangladesh Government’s commitment towards the achievement of Millennium Development Goals 4 & 5 of UN.

UBINIG – Policy Research for Development Alternative – policy research, campaign and advocacy organization in Bangladesh is a long standing partner of PWRDF and was retained by PWRDF as the implementing agency of the project in 130 villages in 15 districts of Bangladesh.

It is managed by a Team called Project Central Management Team (PCMT) with 5 senior members of UBINIG is set up and operational which coordinates the works at the field through a team of staff known as Project Field Implementation team (PFIT) .

ZaidaBastos, CIDA Programme Coordinator of PWRDF visited UBINIG in January, 2012 just the time when the Contract was signed for the project.