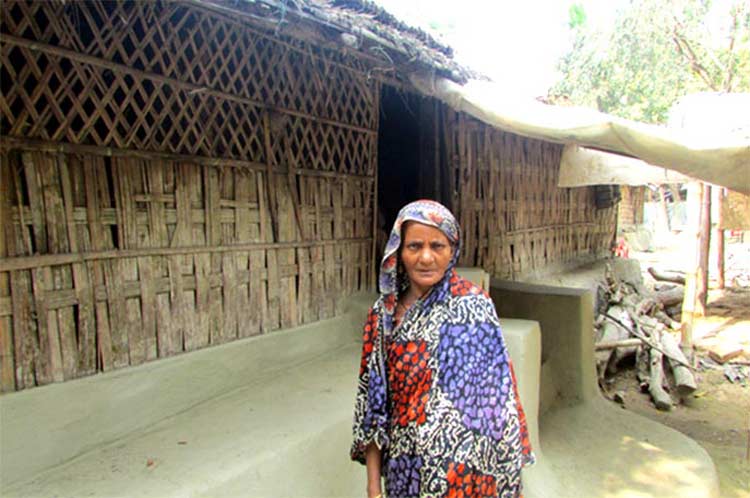 Hosne Ara Begum (52), husband Moksud Ali (60) lives in Dakhin Krishnapur, Union: B.M. Char, Upazila: Chakaria, District: Cox’sbazar. Hosne Ara Begum has been working as a Daima for last 25 years and is a skilled birth attendant. After getting involved with in the Krishnapur Daighor since its establishment (Year 2014), she has received five days training and is a member of the Daighor Management Committee.

Dwelling houses and roads were waterlogged to the depth of 4-5 feet during five times flood during June-July, 2015. The house of Daima Hosne Ara Begum was inundated 3-4 feet deep water. They had to live on raised platform. They lived only on dryfood such as cheera (pressed rice) and muri (puffed rice) for 5-6 days during the peak period of flood. They had no chance to change cloths for more than 10-12 days. Even under such difficult living condition she had performed her duties and responsibilities very sincerely as a Daima.

During this time she helped with the delivery of five babies ( two girls and three boys) while the houses were inundated with flood water.

In these cases, either the husband or the father of the pregnant mother came with a boat and took Hosne Ara to the pregnant mother. In case of delivery of an expecting mother in Uttar Krishnapur village, Hosne Ara Begum had to walk through waist deep water. There was knee-deep water in the house of the pregnant mother. The delivery was performed on raised plat form. The mother and the baby were shifted to the Government Hospital at Chakaria for better post-natal care particularly to save the babies from getting pneumonia.