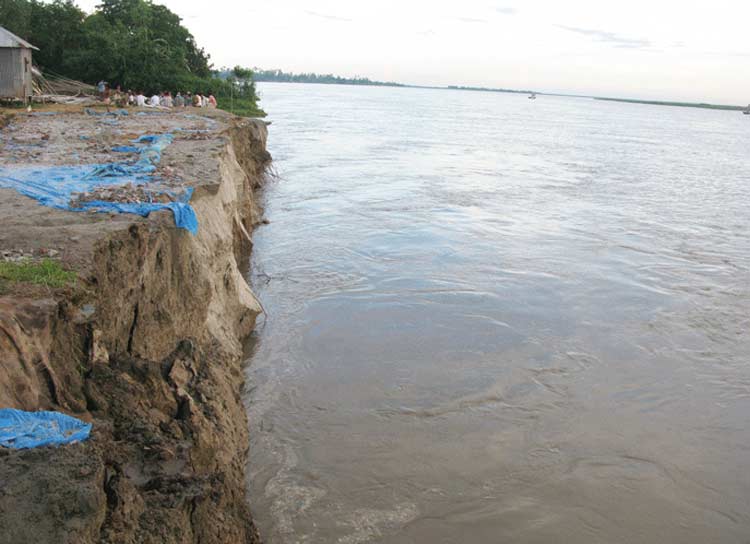 People in Sonatoni and Ghorjan union of Sirajganj district have been living on the bank of Jamuna River and facing continuous threat of river erosion causing cultivable land and household disappearing. Since 2010, the people have used local technology of Chatka – the bamboo binding to redirect the water flow of Jamuna River and hinder river erosion. (also see www.cbmsouthasia.net/2011/08/26/bangladesh-bamboo-binding-on-jamuna-river/)

Acknowledging the local knowledge of controlling river erosion by redirecting the water flow of Jamuna river, Chatka or bamboo binding was constructed on the north western corner of the kheya ghat (boat landing) of Ghorjan village. As a result land accretion of 73.5 hectares has taken place in last five years. Out of these, 33.4 hectares are now being used for crop production. The direct beneficiaries include 150 households.

The people of Ghorjan union (Chowhali Upazila, Sirajganj district) mainly depend on farming, fishing, weaving and business for their livelihood. But the behavior of Jamuna river determines the fate of their lives and livelihood. The people perceive that they benefit immensely from the silt carried with the seasonal flood. On the other hand, heavy floods cause loss of life, livelihoods and infrastructure. Such heavy floods can have long lasting impact on environment, life and livelihood of the people. Occasion erosion of the river banks take their homes, schools, community centers, bazaars and the crop land deep into the river.

Chatka (the Bamboo binding) is an innovation of the people in the community and an initiative of Nayakrishi farmers. Joint efforts of UBINIG and Nayakrishi farmers and the Ghorjan community under the Community-based Biodiversity Management Project, bamboo bindings were constructed in 2010 which not only resisted land erosion, but also helped accretion of 73.48 hectares of land. The farmers have now diversified options mixed cropping, cultivation of local varieties of crops, increasing the number of crops and breeds of poultry birds and domestic animals.

The farmers grew early varieties of aus rice in the newly accreted land which was harvested before flooding in the rainy season (June). The farmers grew Sesbania (dhaincha) in the borders of the rice field for protecting crops from floating weeds like water hyacinth. The farmers cultivated mixed crop of rice with foxtail millet and sesame. In some other plots wheat was grown in mixed culture with mustard. Groundnut was grown on the land close to the river. Rice area as well as varieties of rice increased due to new land accretion. The most common rice varieties included Digha, Hijal digha, Bakjhul, Kartikjhul and Dhepa. The farmers were satisfied with more siltation after that cultivation of rice before flood. Consequently there were higher yields of the subsequent crops. The flood tolerant rice varieties grew with rising water.

The farmers broadcast black gram seeds in the standing crop fields of aman rice without any tillage in the month of September-October after recession of flood water. Rice is usually harvested in November and black gram in January. Local rice varieties are sown broadcast on these lands in April-May. Some farmers grow sesame and foxtail millet with rice in this type of land. Millet and sesame are harvested in June. Black gram is broadcasted in the standing crop of rice. The farmers earn about a sum of BDT.19000.00 from one bigha of land (0.134 hectare) in a season. The farmers use the seeds saved on farm. For growing the four crops of rice, sesame, millet and black gram the farmers plow the land only once in April. In other lands the farmers grow mustard, wheat, groundnut, jute and rice.

The farmers have become self contained economically because of land accretion of 73.40 hectares after the erection of Chatka. The beneficiaries include 750 people in 150 households. Bamboo fencing not only benefitted these people but also the people in other five villages living in nearby villages as they had access to their crops. The additional gross income from the newly accreted land after construction of bamboo fencing in a season is BDT 47,50,000 (Over 60,000 USD). Feeds for domestic animal and poultry birds have also been ensured. The provision for grazing land of cattle has also improved.

Damages caused by river erosion where there were no Chatka

Chatkas were not constructed in Bantiar, Choto Chamtara, Baro Chamtara, Kalibari and Tangrabari villages of Sonatoni Union. Consequently, heavy damages were caused by river erosion in these villages. Homestead area of 4.68 hectares and 2 hectares of cultivable land in the field of 35 households were eroded by river erosion this year (2015). It was learnt through interview with the members of the affected households that they had been living in the houses built about two years ago. They had spent about BDT 60,000.00 each for constructing their houses. In a period of two years they again had to shift their houses elsewhere. All the standing trees and emerging plants including timbers, fruits, vegetables and medicinal herbs were lost due to land erosion. 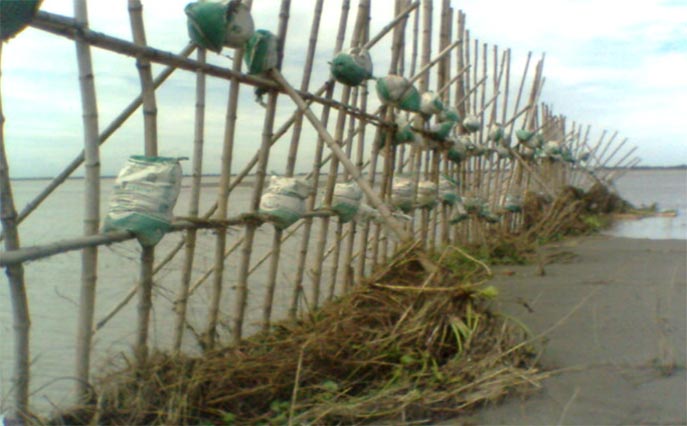 The areas between Ghorjan burial grounds to boat station, south west side deserve urgent attention for construction of Bamboo Binding. The river is deeper here and has speedy current of water flow. So, the bamboo bindings need to be constructed close to the bank of the river. The bamboo binding may be washed away due to heavy current of water if it is made in the middle of the river. This year (2015) flow of water current is directly hitting in front of the Daighor, other dwelling houses and Bantiar bazaar due to the emergence of new char-land in the river on the south-west of Jostnapati Biddaghor of UBINIG. Consequently, there is heavy land erosion every day on this sport and some houses are being shifted elsewhere.

Due to heavy flow of water there is land erosion near primary school at Choto Chamtara and Bara Chamtara villages. According to the option of bamboo binding expert farmers, one weekly market, one daily bazaar, one primary school, one high school, three mosques, two burial grounds, one madrasha, one dai ghor, one community seed wealth center, one seed Akhra, one club, Jotsnapati biddaghor, roads, weaving industry, cultivable land, dwelling houses, standing trees, etc. could be saved by constructing 2-3 more bamboo bindings in the river on the north of Bantiar village near the burial ground in the Ghorjan village.

The name of people, village and professions of the persons helped providing are the following: