SIDR affected areas after two months: No roof on houses, no work to do 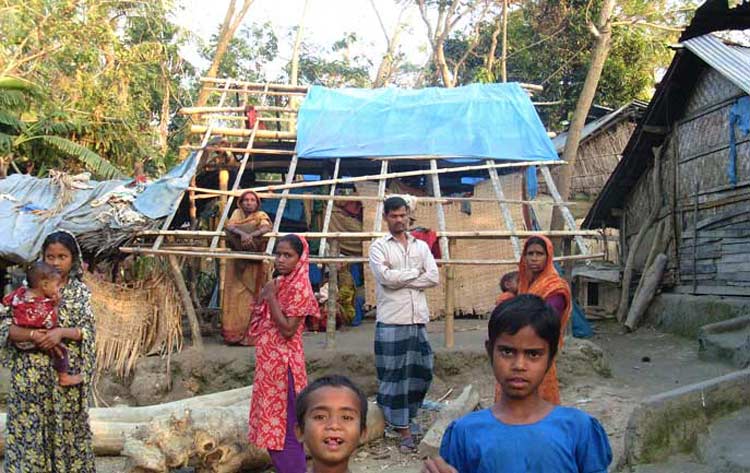 I feel humbled to write on my visit to the cyclone SIDR area after about two months. I could not go earlier, I feel bad about it. Finally, I visited Pirojpur on 7th January, 2008. The cyclone SIDR hit the coastal areas of Bangladesh on November 15, 2007. Almost two months have passed. In the past months, I have heard many reporting from my colleagues who visited the area by 20th November and also were involved in the immediate relief works. In Dhaka, like everyone else, I was glued to the television to see the electronic media reporting. The journalists were quite sincere in presenting the devastation and sufferings of people to the people in other parts of the country.

But, now there is no media reporting on what is happening to the people affected by the cyclone. There is hardly any relief-cum-rehabilitation activity carried out by the government or the non-government organisations. But the signs of devastation are still there - big trees are fallen, the houses are there without any roof. The signs of devastation are very much alive. In Bangla the phrase “Londo-Bhondo” was used to explain the devastation in the media. I could see exactly what Londo-bhondo meant even after two months. There is no other phrase to articulate the situation. 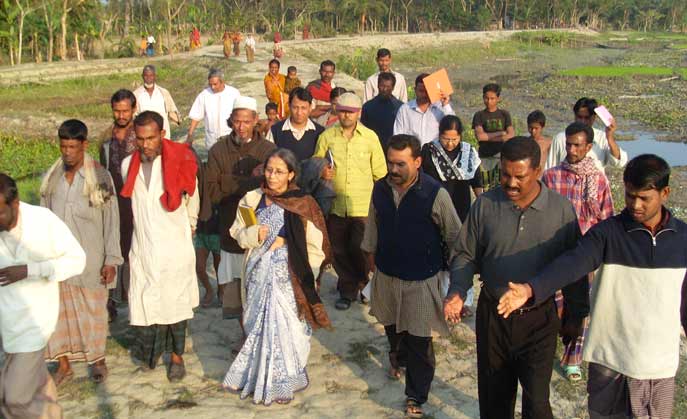 Yet, life goes on. People cannot sit idle and wait for someone else to come and reconstruct their houses. The houses are being built on their own initiatives with the materials they could collect from the surroundings. From the broken trees they can get few branches for the houses. The poles and walls could be made with the broken trees.

But those are not enough. The housing materials such as tin and bamboo are to be bought. They do not have money to buy them. It was also found that although the big trees are fallen, the poor people cannot cut the tree as it is owned by others. However, the private ownership of the alien species trees did not stop from falling on the roofs of the poor people’s houses and to break them. Most of the big trees such as Raintree, Koroi were planted under social forestry programme and these trees are alien to the area. The roots are not deep enough therefore could not sustain the heavy wind. 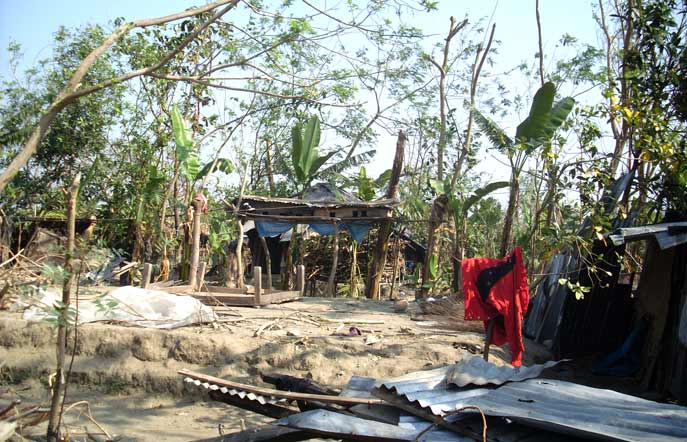 Women, as their normal work, have made the floors of the houses and the raised platform polished with mud. It looks beautiful. Habiron nesa of Saidkhali showed us the homestead without any house on it. She is smearing it with mud and cowdung every day. Now she is waiting get the materials to build the house on this floor. She is using the courtyard to dry the collected paddy from the nearby fields.

Others who are better off, have managed to build the houses with tin (old) and timber pieces. They have shown their artistic skill in building the houses. The capacity to cope with the devastation depended on their ownership of resources before the cyclone. So the unequal situation is quite clear in the stage of rebuilding. People with resources at least have roofs on their houses while the poor do not have any. Maznu, a fishing labour in Saidkhali remarked, “We are Bhumiheen (landless). It is a beautiful name for us, we are ‘Heen” or less in everything. God has sent us to the world in this name!!” Obviously, his satire expressed a lot. Cyclone SIDR could take away everything, but it could not eliminate the inequality and differential access and ownership of resources.

So far, assistance for housing was given in cash form. They reported different amounts. Some said they received Tk. 1000 and some said, Tk. 2000. But this amount is not enough to buy tin or other housing materials. They are told that more money (upto Tk. 5000) will be given later. So they are holding the money in the hope of further assistance from the government for house building. How long they can hold the money without spending it on other necessities? It is not unlikely that once the micro-credit organisations start installment collection, this money will be used. ASHA has already declared according to villagers, that two month period is over, therefore they will come to collect the instalment from next week.

Besides the destruction of the houses, the utensils with which they can cook food, pitcher to drink water, the pot (Bodna) for the latrine have all been washed away. Women started collecting the utensils from next day. Momena showed the cooking pots she could collect from the paddy field after two days. She was given an old pitcher for water by her relative. She had to buy a new aluminium pitcher with Tk. 250. It was very much necessary to bring water.

The pots are kept clean but there is not enough food to cook. Besides the cooking pots, I was really touched by seeing the torn book of the school going daughter of Momena.This is considered as important as any other assets of the house.

What did they eat in the first three days? I asked in a curious way. The cyclone was on the midnight of Thursday (15 Nov). On Friday, there was nothing to eat. Everything was gone. Everyone was traumatised and shocked and were busy in looking for their family members, cows, goats… They did not think about eating. On Saturday, a political leader of the area gave Tk. 100 each to the 150 families. Some of them went on the other side of the river to buy dry food including Chira, Muri and mollases. Some cooked-food was distributed one day after the cyclone. The Union Parishad gave 10 kg of rice, from VGD they reveived 15 kg of rice. In this village, UBINIG provided 5 kg rice, with salt, dal, potato etc. When they did not any food, they drank pond water.

Cows are wealth to the poor households in Saidkhali, especially to women. Surjabhan said, she had two cows, one was pregnant. These were my ‘Sampad’ (wealth). The cows died. Now, I am totally resource-less.

The lack of work was quite visible. Most of the adult people are without work. But there are lots of work to do in the village. For example, the big tree that have fallen needed to cleared, and would need adult labour. However, there is no one to recruit them and pay the wages.

The Aman paddy is matured and ready to be harvested. At the time of the cyclone, the paddy was maturing. The local variety could survive the wind and tidal bore but the HYV variety was affected. Many of the HYV Aman paddy have Chita (empty grain). The farmers’ estimated a loss of 25% of the standing paddy. However, the striking situation in the area is that there are very few people engaged in paddy harvesting works. The poor and marginal farmers can harvest by using their own family labour but the middle farmers are not able to hire labour with the rate of Tk.100 and three meals per day. So the paddy is still lying in the fields. 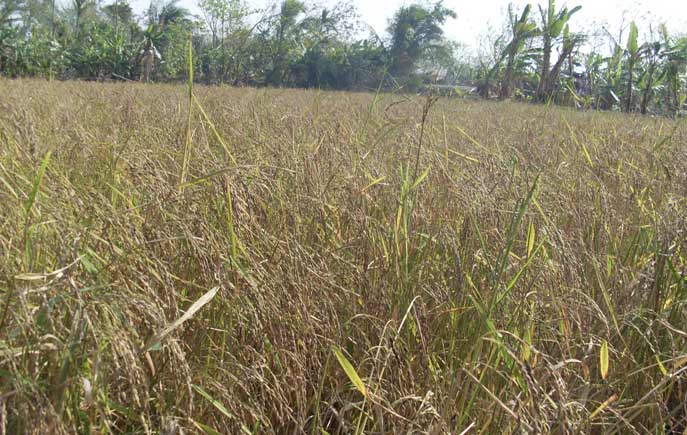 Similarly there are many activities that are needed to be done and have the potentiality of employment generation. These are not being done by any organisation or the government so the situation of unemployment is aggravated. The farmers and fishers are looking for alternative jobs, the options for those jobs are limited too.

There are too many works to do but no one to organise the works. Too many people including men and women are without work. This paradox needs to be broken.