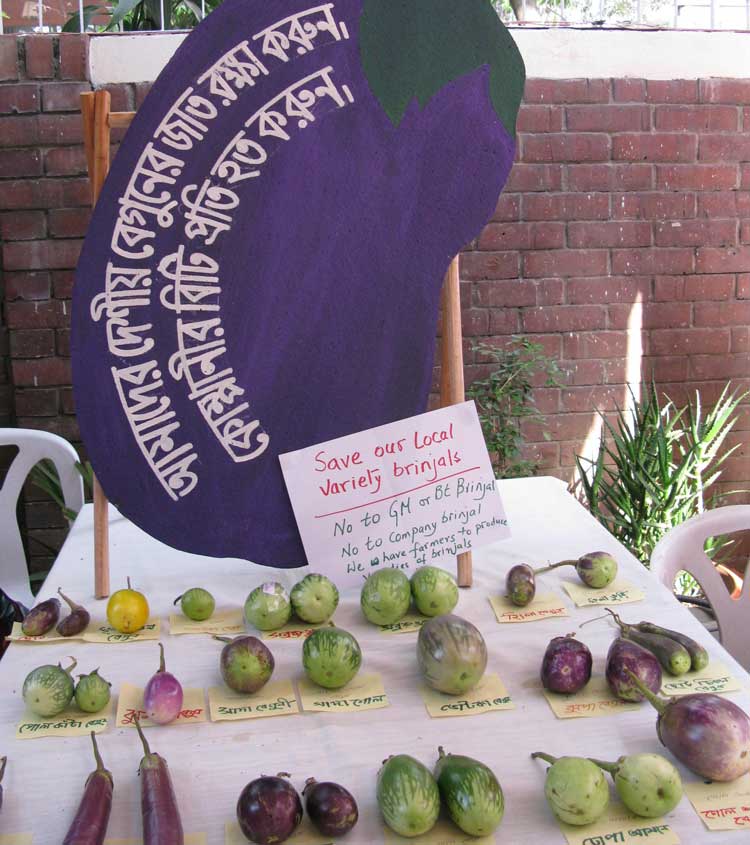 Risk to Environment, Biodiversity and Health

"Begoon" (Brinjal or Eggplant) is a very common and favourite vegetable in Bangladesh. It is even becoming an international vegetable along with okra and cauliflower because of the Indian Restaurants in Europe and North America. But for us in Bangladesh, it is not just a vegetable, it has more link with the social, cultural and economic lives of rural people, particularly women. It is cultivated in the agricultural fields sometimes as a cash crop in the commercial vegetable growing areas, but every rural household has few brinjal plants in the kitchen garden. But unfortunately, now this Brinjal is facing severe and aggressive threat from the Biotech industry with the so-called Bt. Brinjal. The Indian private seed company, Maharashtra Hybrid Seed Company (Mahyco) is now transferring the technology and basic breeding material of Bt brinjal to Indian public sector institutions (PSIs). The partnership arrangement of Mahyco has also been done with institutions in other countries such as University of Philippines, Los Banos, Bangladesh Agricultural Research Institute (BARI) and a private seed company, East West Seeds, Bangladesh. In Bangladesh, it has been sponsored through the Agricultural Biotechnology Support Project II, (ABSPII) funded by the USAID and managed by the Cornell University.

The Bt. brinjal contains a gene construct of Cry 1 Ac from Monsanto, the American MNC, which has a 26 per cent stake in Mahyco-Monsanto Biotech (MMB). The institutions under partnership with Mahyco are using the Mahyco material to backcross with their own brinjal varieties to incorporate the genetic event into them, imparting tolerance to the fruit and stem borers of brinjal that cause severe damage to the produce.

Bt Brinjal has been developed by inserting a gene cry1Ac from a soil bacterium called Bacillus thuringiensis through an Agrobacterium-mediated gene transfer. This is said to give the Brinjal plant resistance against lepidopteran insects like the Brinjal Fruit and Shoot Borer (Leucinodes orbonalis) and Fruit Borer (Helicoverpa armigera). Upon ingestion of the Bt toxin by the insect, there would be disruption of digestive processes, ultimately resulting in the death of the insect. Technically speaking, Bt brinjal contains three foreign genes which have been inserted namely:

2. The nptII gene for an antibiotic resistance marker, neomycin phosphotransferase-II.

3. The aad gene for another marker 3” (9) O-aminoglycoside adenyl transferase.

It has been claimed that the expression of the cry1Ac genes would provide an effective built-in control in brinjal for fruit and shoot borer to reduce pests-linked damages.

But why do we need Bt. Brinjal at all in Bangladesh? The main argument used by the company in India is that the damage caused by the Shoot & Fruit Borer in brinjal [which has been the major pest for the past two decades or so] ranges from 50 to 70% and in economic terms, it is estimated to be around $221 millions. In Bangladesh, the Bangladesh Agricultural Research Institute uses the same logic to bring the technology and allow the company to use our local variety brinjals for transformation into Bt. Brinjal. The field trial at BARI has been going on for last few years. To support the approval of the GM food crops the present regime of Mohajote, led by Awami League has tabled a Bill called "National Institute of Biotechnology Bill-2010"in the Parliament on 10th February, 2010 by the State Minister for Science & ICT Yeafesh Osman. The National Institute of Biotechnology is going to be an authority to set standards for highly controversial genetically modified (GM) foods and crops in Bangladesh. So it is really a matter of concern, that the Bt. Brinjal might get approved without consultation with the relevant stakeholders particularly those concerned about the threat on the local varieties of Brinjals, environmental and health threats and the control over the technology, the question of patenting etc.

There are many varieties of Brinjals in Bangladesh for thousands of years. It is also one of the centers of origin for brinjal (egg plant) according to Nicolai Vavilov (1887-1943), the foremost plant geographer of his time. Vavilov took part in over 100 collecting missions to 64 countries, besides his work within Russia, in the world. In 1926, he published "Studies on the Origin of Cultivated Plants" describing his theories on the origins of crops in which he concluded that each crop has a characteristic primary center of diversity which is also its center of origin. Eight areas were recognized and suggested as centers of origin from which all of our major crops were domesticated. These eight areas were 1. South Mexican and Central American Center, 2. South American Center, 3. Mediterranean Center, 4. Middle East, 5. Ethiopia, 6. Central Asiatic Center, 7. Indian Center and 8. Chinese Center. The Indian Center was divided into two subcentres: a. Indo-Burma, which was called the Main Center (Hindustan) included Assam and Burma, (but not Northwest India, Punjab, nor Northwest Frontier Provinces) had 117 plants and b. Siam-Malaya-Java: statt Indo-Malayan Center included Indo-China and the Malay Archipelago, had 55 plants. The Indo-Burma sub-centre was the centre of origin of the Vegetables and Tubers such as eggplant, cucumber, radish, taro and yam (see wikipedia). In that respect, Bangladesh is geographically located in this centre of origin. While, Bangladesh has such rich heritage of the brinjals, why do we need a transgenic brinjal? Is it only to get rid of the stem and fruit borers? Farming communities of Bangladesh know well that managing stem and fruit borers is possible through good soil management, crop rotation, mixed cropping with local variety brinjal seeds. Can't Bangladesh Agricultural Research Institute (BARI) develop its own technology to reduce the application of pesticides in commercial brinjal cultivation and make it a safe food for people? After the Earth Summit, 1992 we have been hearing about eco-systemic approach to agriculture. It is very much true that the commercial cultivation of brinjals mostly HYV and Hybrid varieties used huge amount of pesticides. In India too, this was an issue created mainly by the HYV and Hybrid varieties, now Bt. Brinjal is seen as a way out of it - a problem created by the pesticide industry themselves.

To get a sense of the volume of pesticides used, journalists of Indian Express travelled to Simuliapara, 100 km from Kolkata, in the heart of the brinjal belt. According to Indian Express, about 2.7 million tonnes of pesticides used per year in West Bengal which accounts for almost 30 per cent of the total brinjal production in the country [www.indianexpress.com/news/the-pesticide-on-the-brinjal-plate/].

According to a UBINIG study conducted in 2002, Dimecron 100SL, Furadan 5G, Sunfuran 5G are found to be used for egg plant and other vegetables. These are granular pesticides for killing pest attack on the stem and the liquid pesticides are used for pest attack on leaves. Marshal 20 EC, Fenfen, Nogos and Thiodin are also used to get rid of ants. In general, the commercial Brinjal producers use a wide range of carbamate, organophosphate and synthetic pyrethroid in various formulations against brinjal shoot and fruit borer, which are quite hazardous to health and environment.

From planting of the seeds to harvesting of the fruit, pesticides/insecticides are used more than six times. But this is a problem of monoculture commercial cultivation of brinjal and the extensive promotion of the pesticide companies to use the pesticides. But this does not justify in any way genetic modification of the brinjal by the multinational companies. The genetic modification of the brinjal does not make it any better as they are just another pesticidal transgenic transformation of the plant which has various impacts particularly on soil eco-system, environment and human and animal health. 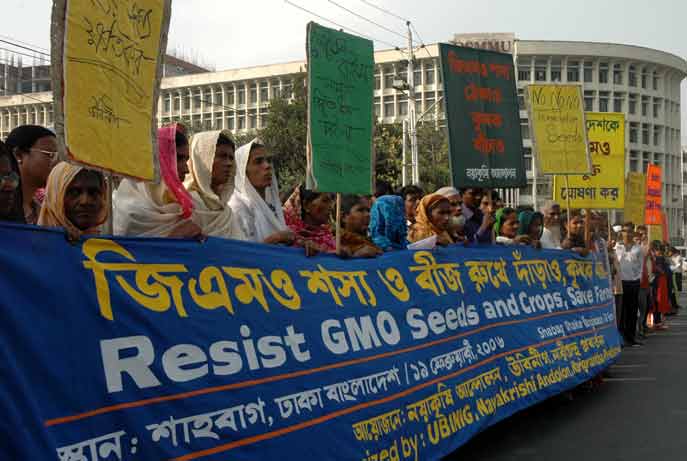 Farmers of Nayakrishi Andolon, the biodiversity-based farmer's movement came to the capital city of Dhaka in 2006 from different districts to protest introduction of GM seeds in Bangladesh. At that time, there were attempts by Syngenta to introduce Golden Rice, the genetically modified rice as a solution to Vit - A deficiency.

Bt Brinjal in India has become controversial. The promoters claim that Bt Brinjal 'will be beneficial to small farmers because it is insect resistant, increases yields, is more cost-effective and will have minimal environmental impact'; while environmental scientists and health experts are concerned about Bt Brinjal for its possible adverse impact on human health and bio-safety, livelihoods and biodiversity. This controversy finally led to the Moratorium on Bt. Brinjal (February 9th, 2010) declared by the Environment Minister Jairam Ramesh. In his statement, the Indian Environment Minister said, "Based on all the information .......and when there is no clear consensus within the scientific community itself, when there is so much opposition from the state governments, when responsible civil society organisations and eminent scientists have raised many serious questions that have not been answered satisfactorily, when the public sentiment is negative and when Bt-brinjal will be the very first genetically-modified vegetable to be introduced anywhere in the world and when there is no over-riding urgency to introduce it here, it is my duty to adopt a cautious, precautionary principle-based approach and impose a moratorium on the release of Bt-brinjal, till such time independent scientific studies establish, to the satisfaction of both the public and professionals, the safety of the product from the point of view of its long-term impact on human health and environment, including the rich genetic wealth existing in brinjal in our country. A moratorium implies rejection of this particular case of release for the time being; it does not, in any way, mean conditional acceptance. This should be clearly understood." (italics was in the text.F.A).

According to the ‘Bt Brinjal – a Briefing Paper’ by Centre for Sustainable Agriculture, June 2006, the potential health hazards include problems with growth, organ development and damage, immune responsiveness as found in the GM-fed animals. In Madhya Pradesh India, adverse human health impacts in farm and factory workers with allergies caused by Bt Cotton were found. Itching skin, eruptions on the body, swollen faces etc., were also reported, correlated with levels of exposure to Bt Cotton. In the Philippines people living next to Bt Corn crop fields had developed many mysterious symptoms, especially during pollination time. Genes inserted into GM food survive digestive processes and are transferred into the human body. They are known to have transferred themselves into intestinal bacteria too. Bt toxin had caused powerful immune responses and abnormal cell growth in mice. It has also been shown that all the Cry proteins in Bt crops have amino acid sequence similar to known allergens and are hence potential allergens.

Among the potential environmental hazards, resistance development in the target pest is predictable, even the companies promoting Bt Brinjal are already talking about resistance management. Decline in the soil productivity after growing Bt. Cotton was found. Worldwide, it is generally accepted that more studies are needed to understand the impact of Bt toxin on soil ecology. The issue of cross pollination in the case of Brinjal is of concern too. The pollen flow studies on Bt Brinjal in India have been done only in one year ,2002, in two locations only. Studies elsewhere have shown that the likelihood of out crossing from genetically engineered crops is much higher than in non-engineered crops.

We have enough varieties of brinjals and biodiversity-based ecological agricultural movement has clearly demonstrated that there are more prudent scientific approach to transform so called ‘pest’ into biological resources and increase yield per unit of land in Bangladesh. We can also carry out research, even within the conventional farming practices to reduce pesticide application in brinjal cultivation and yet get better performance in controlling stem and fruit borers. Let's not pose threat to our environment and health of our people. The aggressive threat to destroy the diversity of local variety of brinjals - in one of its most important centers of origin, is a serious national concern. It will be a shame, if Bangladesh becomes the first country to approve Bt. Brinjal for commercial cultivation with support from a foreign company and therefore becomes controversial worldwide among the environmental and health groups.

Other Articles of interest: