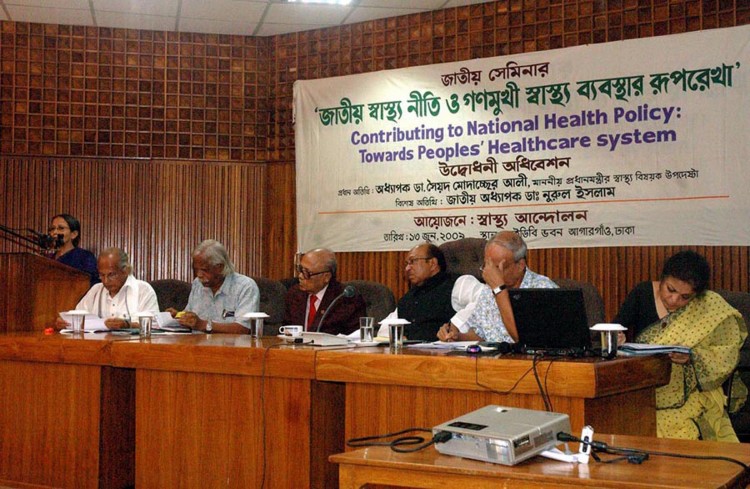 As a network Shashtya Andolon first made a critique of the National Health Policy, 2000 declared by the then Awami League government. The network organizied a National Seminar “Critique of the National health Policy: In search of a Peoples Policy on Health” during 25 – 26 September, 2000 and covered a wide range of issues including the important issues of indigenous people’s health, disability, and agriculture as health, environmental issues, child health and nutrition that are not well covered in the Health Policy. Since 2000, Shasthya Andolon carried out meetings on different health issues.

In 2001, after the change of the government this health policy was not implemented. Another Health Policy was drafted in 2006. However, it was not made available to public. Therefore Shashtya Andolon could not respond to it. 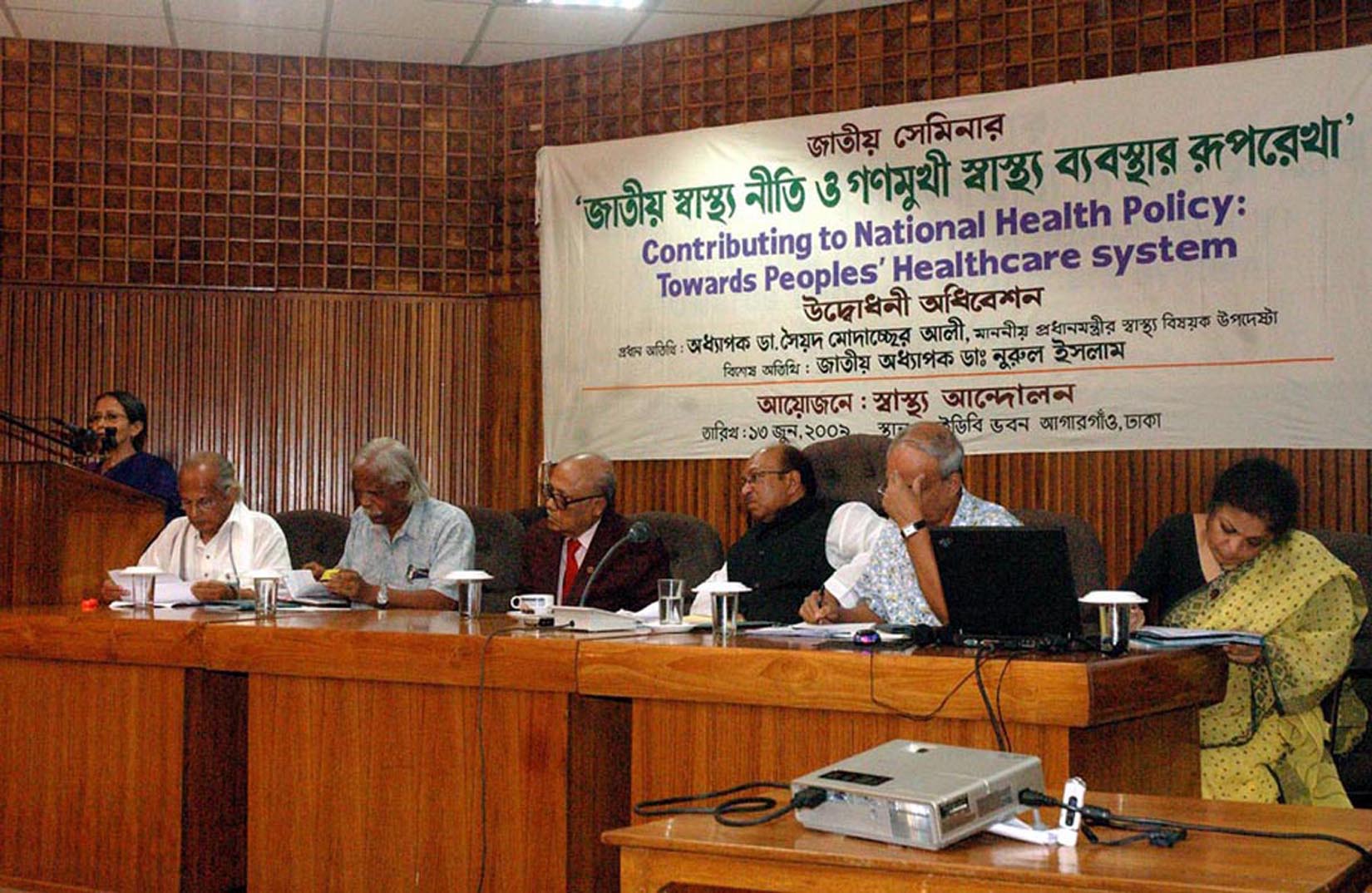 The Care taker government (2007-2008) of Bangladesh came up with the National Health policy – Update, 2008 in August 2008, which was beyond its mandate. The draft was prepared by a committee formed by the Ministry of Health and Family Welfare, and was given in the website for suggestions from relevant quarters within September 15, 2008, later extended to September 18, 2008. The process of formulation of the National Health Policy was not transparent to the relevant stakeholders.

Shasthya Andolon members first expressed their position through a Press Conference on 17th September, 2008 at the Reporter’s Unity, Dhaka and clearly stated that it was not the task of the caretaker government to take up such important issue of public interest. An elected government should formulate the health policy. Shasthya Andolon also protested against the attempt for undermining the public health services and extensive promotion of privatisation of health care system. As part of the programme, Shasthya Andolon organised a day-long seminar to discuss various aspects of the National Health policy, 2008 on 22nd September, 2008 at the National Press Club, Dhaka.

The major decision that came out from the National Seminar on Health Policy, 2008 held on 22 September, 2008 was that we need a concrete plan to draft a Peoples’ health policy. All activities such as research to collect evidence, mobilisation of public opinion, policy and media advocacy, etc., should be focused around this primary task. Shasthya Andolon members felt the need to collect public opinion about healthcare services and the next step would be to contribute towards the efforts of the elected government to enact the policy.

After two years of an un-elected government in power, the elected government cabinet was sworn in on 6th January, 2009. The Mohajote (Grand Alliance) government led by Bangladesh Awami League formed the new government after the National Election held on 29 December, 2008. In the newly formed Cabinet of Ministers, Dr. AFM Ruhul Haque, former Director of National Orthopedic Hospital and former Chairman of Orthopedic Department of Bangabandhu Sheikh Mujib Medical University has become the Minister for Health and Family Welfare.

It is important to note that the Upazilla Elections are also here held on January 22, 2009. Therefore, the representatives of the local government bodies will also resume office and therefore would play a very important role in the Healthcare system at the upazilla level.

One of the major issues that need to be dealt in the National Health Policy is private and public sectors stand against each other. This is both politically sensitive and practically complex issue that demands more close and critical attention. Those who are speaking on behalf of public sector are essentially concerned about the increasing emphasis on privatisation of health services and are therefore rightly pointing to the fact that we must challenge neoliberal policies and institutions. This is the general mood or position of pro-people health movements not only of Bangladesh, but around the world. Indeed neo-liberal era is collapsing and coming to close. It is time to be more creative.

The Shashtya Andolon members have been seeking a peoples’ health policy with affirmative plans and activities for the poor and the disadvantaged, and the people in the grass roots with special situations such as the people living in the geographically difficult areas, the adivasi communities, people with disabilities, special needs of working people and women in particular. Children also need particular attention. We will have to enact a policy that serves the interests of the majority of people. Therefore, Shashtya Andolon decided to pro-actively organize a seminar before a Health Policy is declared by the government. The present task is to contribute towards the National Health Policy to be formulated by the new Government with pro-people healthcare perspectives. With this objective, a two-day long seminar on Contributing Towards National Health Policy: Towars Peoples Healthcare System was organized during 13 – 14 June, 2009 at IDB Bhaban, Dhaka. The timing was important as the National Health Policy, 2009 was going to be announced soon by the Ministry of Health and Family Welfare, Government of Bangladesh. The objective was to contribute to the process of formulating the Health Policy that takes us to realising a peoples’ health care system, particularly ensuring the rights of the poor to receive proper health care. The seminar was attended by 194 participants including individuals, professionals and representatives of 76 NGOs and other organizations. There were 17 designated speakers and 31 persons spoke to give comments in the open forum.

Shashthya Andolon conducted several preparatory meetings before the seminar and it was a collective effort by the member organizations and individuals. UBINIG hosted the seminar and took responsibility of all logistical arrangements.

The Shashtya Andolon has expressed its position on budget allocation in health by holding a Press Conference on 1 June, 2009. The following is the Press Statement on Budget, 2009.

Henceforth, it is not possible to make the government facilities active to provide health services due to lack of allocation for health sector. Although the poor people were promised to receive free treatment, in reality it is not possible for the shortage of medicines and other medical equipments at Upazila and Union level. Poor people have to spend their earnings to get health services; sometimes they even borrow money from others.

We are very surprised to see that there is almost no discussion about budgetary allocation for health. So, there is no chance to provide opinions regarding this in time. However, we are very worried about the budgetary allocation for health after looking into the pattern of allocation in previous years. We hope that the government will take into account our concerns before declaring the budget. On the other hand we found that the government had already declared user fee in return of health services. This has created public reaction. This means that one must receive health services at government hospitals by purchasing a ticket. Health Movement thinks that poor people will be deprived from the right to health care services when the government will receive user fee from them without even improving the health services.

The recommendations for the national budget of 2009-2010 are as follows:

i. Budgetary allocation for health sector must be increased; but we want to see whether this allocation is proportionately increased in line with GDP

ii. Is the budgetary allocation for primary health care distributed accordingly so that the money will reach from district to union level?

iii. The allocation should be distributed based on the population size and geographical difference of all the Upazila in Bangladesh

iv. There must be an allocation for health services for special population such as indigenous population, emotionally and physically challenged population and people from affected places

v. There should be necessary allocation for women’s, children’s and elderly people’s health care

vi. There should be allocation for special health care for wage laborer at agriculture and industrial places

We demand that the government will give special attention to these aspects and we hope that through proper budgetary allocation the government will meet the expectations of general people. We are urging the members of parliament to raise these issues when the budget will be placed the parliament.

Awami League, the ruling party of the present government promised at their election manifesto “In order to ensure health facilities to every citizen of the country, the health policy of the erstwhile Awami League government will be reevaluated and adjusted according to the demands of the time” (Election Manifesto of Bangladesh Awami League-2008). At many meetings after forming government the Minster for Health declared that the National Health Policy would be implement soon. Two Health Policies were formulated preceded by Awami League’s government. Last year’s (2008) National Health Policy and a draft update (27.08.2008) are available both in Bangla and English at the website of the Ministry of Health and Family Welfare. But there is no information about the new health policy available in their website or in any of the newspapers. We demand, as a democratic government they should create a space for discussion, analysis or public debate by sharing the draft on National Health Policy if it is already prepared. This will help to make necessary changes which are applicable for general people. All concerned sections including Health Movement is eager to have a pro-people National Health Policy. If there is an opportunity for analysis and open discussion besides Parliament, the formulation of the health policy will be participatory. This will create ownership among general people. Besides the Ministry of Health and Family Welfare, the other line ministries should also take initiative regarding this.