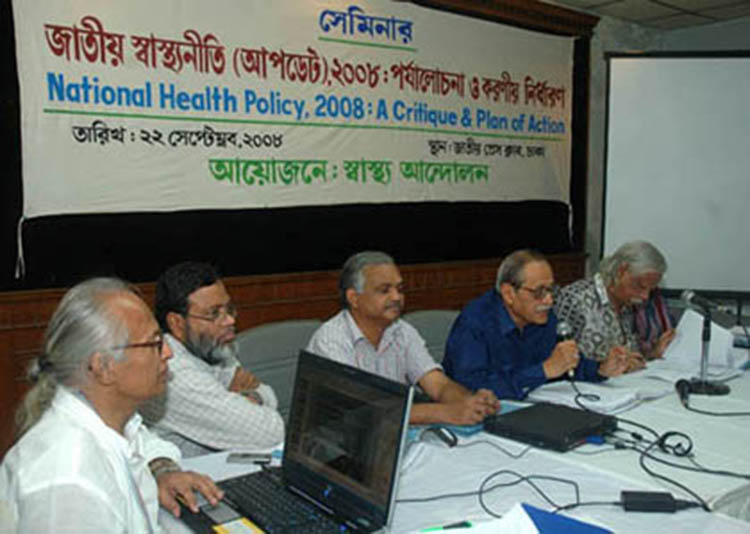 Shashthya Andolon, a group of health activists involving health practitioners, researchers, policy advocacy groups, journalists and social activists, responded immediately by critically analysing the document. Shashtya Andolon members held meetings to discuss on the document and to come to a position on the Health policy 2008. A Press Conference was held on 17th September, 2008 at the Reporter’s Unity, Dhaka and it was clearly stated that it was not the task of the caretaker government, but wait for the elected government should formulate the health policy. Shashthya Andolon also protested against the attempt for undermining the public health services and extensive promotion of privatisation of health care system.

As part of the programme, Shashthya Andolon organised a day-long seminar to discuss various aspects of the National Health policy, 2008 on 22nd September, 2008 at the National Press Club, Dhaka.

The team work of the Shashtya Andolon members with UBINIG as its secretariat helped to come up with various papers writtn and presented in the seminar. The participation of the cross section of people in different organisations and professions was ensured so that the response to the Health Policy is seen as a multi-stakeholder issue and not only of the health professionals.

There were 4 sessions including a short opening session with the introductory paper presented by Farhad Mazhar. National Professor Dr. Nurul Islam was invited as the Chief Guest in the opening session. But unfortunately he could not attend because of illness. However, his statement was received later on which is included in the proceedings.

This session highlighted the danger of the neo-liberal model of privatisation of health delivery services and will explore ways of defining the operational notion of health in formulating a pro-people health policy and design a pro-people health delivery structure. This was partly be derived from the critique of the previous sessions but will also build upon the experience of various health delivery models and evidence of their success or failure. The methodology of investigation will highlight the necessary institutional transformation or reforms of the existing health delivery structure guided by the operational notion of peoples health, such as primary health care; secondly, how to finance health needs of the population of Bangladesh on the premise that health is human rights and Government has obligation to the citizens in ensuring health care, and, thirdly, how to address the challenges of producing human resources and knowledge in order to make a pro-people health care service delivery and management functional, effective and efficient.

The First session highlighted the democratic deficit in formulating national policies that by its very design of work can create serious problems in mobilising popular support necessary for effective implementation. While highlighting the significance of the process as an essential element for ensuring policy ownership this session presented a critique of the content of the draft recently produced by the government leading to identifying areas where and how peoples health movements and health activists may engage positively in order to create enabling environmnet to mainstream critical concerns related to health for all.

The Second session built upon the previous sessions, a framework to revisit the National Health Policy 2008 was presented identifying areas of further investigation in order to finalise a Peoples Health Policy.

A detail Plan of Action was drawn to disseminate and popularise the idea of peoples notion of 'health' in contrast to dominant model of health as commodity and health delivery as the function of the market. To sensitise, and educate people and the policy makers the plan of action was taken up elaborate programmes to organise community meetings and mobilisations, formal or informal discussions with the policy makers, media education and other useful activities in order to chart a positive goal towards achieving health for all.