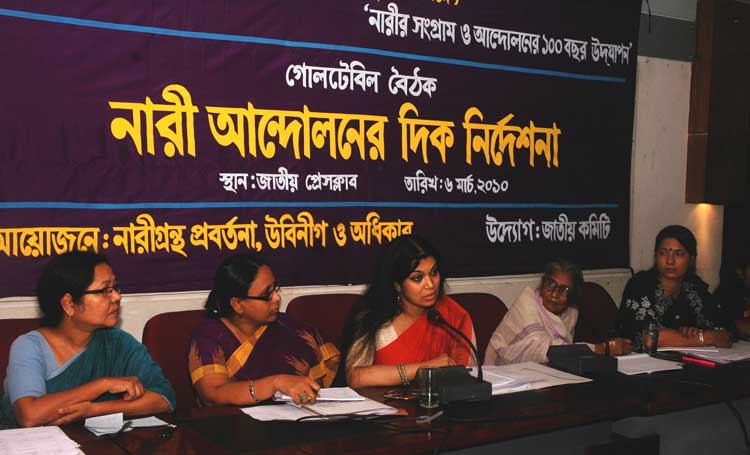 The preparations for the Roundtable discussion started in early January, 2010, in the Monday regular meetings of women in Narigrantha Prabartana. Specific issues were selected for discussions and discussed in an informal manner to clarify the understandings of the women's issues. The theme for the Roundtable Discussion was "Struggles and Challenges faced by women in patriarchal economic and social situation: Demand appropriate policies". The National Committee members with advice from the Advisory committee selected the topics such as 1. Women workers' condition, 2. Violence against women, 3. Agriculture and biodiversity, 4. Women and health, 5. Livelihood and 6. Media projection of women. The Roundtable discussion was chaired in two sessions by Ms. Rowshan Ara Begum, Director General, Directorate of Women's Affairs, Government of Bangladesh and Prof. Latifa Akhand of Women for Women. The Roundtable discussion was attended by representatives of women's organizations from 35 districts and activists in Dhaka.

The presentations were made by two or three speakers on each topic.

The speakers said that women are still discriminated in receiving fair wages and are facing terrible working conditions. The situation of the garment sector is much well known because of its location in the Capital city and its surroundings. But those of the tea garden workers, shrimp industry, salt fields, and dry fish industry women's working conditions are appalling and they are denied of fair wages. Although women are contributing significantly to the economic development of the country, they are recruited mostly because they can be controlled easily and therefore can be exploited.

Women in the rural areas and those in the Adivasi communities are engaged in various activities for sustaining the livelihood practices. The speakers gave examples of such practices in different areas of the country. In Tangail, for example, women are engaged in "Pankha" (hand fan) making, kantha (quilt) making, poultry keeping and kitchen gardening. These activities are carried out by women on their own initiatives. In Birishiri, Adivasi women are cultivation "Jhum Binni" as part of the cultural needs as well as for their livelihood. But due to introduction of modern agriculture in their areas such Binni rice is at stage of getting lost. Garo women are losing their livelihood in the villages and migrating to Dhaka city to be employed in the Beauty Parlors and as house maid in the rich people's houses in Gulshan and Baridhara. On the other hand, in areas like Srimongol, when women want to come out of their houses in search of livelihood, the society considers it as a luxury for women. Such mentality creates more pressure on women for engaging in livelihood practices which is essential for their survival.

The speakers said that the introduction of the modern agriculture was nothing but a package of introducing chemicals such as fertilizers and pesticides along with ground water extraction for irrigation. This also led to the monoculture culture cultivation of rice crops. Farmer women are used to wide diversity as they preserve seeds. But due to modern agriculture they found it difficult to continue to preserve the seeds because the farmers were motivated by the government to grow only HYV crops and get the seeds from the market. The use of tractors is destroying the micro-organisms in the soil. Besides having negative impacts on the soil by the use of chemicals the social and family relations are also worst affected. Farmers are changing occupations and migrating to the cities. However, in this context since 1990s Nayakrishi Andolon is working to organize farmers for biodiversity-based farming and to preserve seeds. Women are leading this movement in at least 22 districts of the country. Farmers are opposing Hybrid and GMOs as they will destroy the local varieties.

According to the speaker from National Herbarium, many rice varieties and food crops are disappearing due to introduction of Hybrid varieties. Among the fruits, mango varieties are threatened. Farmers' knowledge and their skills must be preserved and they should be subsidized to carry on farming in the rural areas.

The situation of violence against women has increased in numbers and also changed in its forms. In both ways, there is a deterioration of the situation for women because women are violated at home, public places, workplaces etc. There is no shortage of laws against Violence against Women but due to inappropriate use and lack of preventive measures the violence is on the rise. The speakers made a clear link with the lack of livelihood opportunities and increasing violences against women. The increasing dowry is also leading to increased number of incidences for trafficking in women. Rape, acid throwing and Eve teasing have increased at an alarming level. The Early marriage and the domestic violence, such as mother-in-law and daughter-in-law conflicts are of concern.

The speakers said, "we are supposed to be fighting for women's rights, rather we are busier in fighting against violence against women".

The speakers said, "we are supposed to be fighting for women's rights as a whole however, due to the high level of violence against women, we find ourselves solely occupied in fighting against this issue".

Women's general health care is a neglected sector. In the healthcare delivery system, only reproductive health care is given importance, particularly after the International Conference on Population and Development (ICPD) held in 1994. But women are suffering from various health problems which needs attention. The recently drafted National Health Policy also did not take into consideration for such needs despite demands raised by women's groups. On the other hand, the privatization of healthcare is depriving women of their rights to get healthcare. The special needs of garment workers, women living in Char areas and hilly areas and also those of the sex workers are not taken into consideration in the health policy.

Women are projected in the media as a "commodity" to sell. Women's beauty, her "soft and submissive nature" are used in the media in the advertisements, in dramas and all other forms of entertainment. Even in advertisements of products for male consumption, women are used to create attraction for the commodity. For the products that women use, the media projects women must be in "kitchen or in toilet".

Even for serious Talk Shows in the TV, the woman presenter must be "good looking" - her intellect is not enough. If she raises questions about capitalism or the corporation controlling our economy, then it is questioned whether she has enough information. The speakers concluded that it is the attitude of the patriarchal society, which determines how women should be projected in the media. The Internet has become a new method of violence against women having pornographic programmes that is destroying the mindset of the young generation.

Farida Akhter, Executive Director of Narigrantha Prabartana raised the question about the consultation of the women's organizations at the district level on the National Women's Development Policy (Nari Unnayan Niti). It was found that none of the 35 district representatives present in the roundtable was aware about the recent initiatives taken by the government. Every body wanted to have the opportunity to give their opinions in developing the policy before it is declared. She also raised the question whether this policy should be called Women's Development Policy or whether it should be called Women's Rights Policy. Women's Development is a very narrow concept to reach the much desired goals of women's rights.

In the open discussion several participants gave their comments on various issues including the issues of rights of sex workers and about women living in the rural areas.

Ms. Rowshan Ara Begum, Director General of the Directorate of Women's Affairs and Additional Secretary chairperson of the first session in her speech, gave examples of the difficulties of working in a male-driven administrative system and full of corrupt practices. She highlighted on her struggles against such practices during her job as Upazilla Nirbahi Officer and as Megistrate. She appreciated the issues raised by the speakers and committed that if the recommendations of the Roundtable are given to her in a formal manner she will do her best to raise the issues at a higher policy level. She encouraged the district level NGOs to be in touch with the district level women's directorate office and carry out activities for women's development.

Prof. Latifa Akhand chairperson of the second session thanked all the speakers and the participants for a very informative discussion in the roundtable and said that the achievement is that the young generation is taking up leadership and are coming up with analysis of the issues.