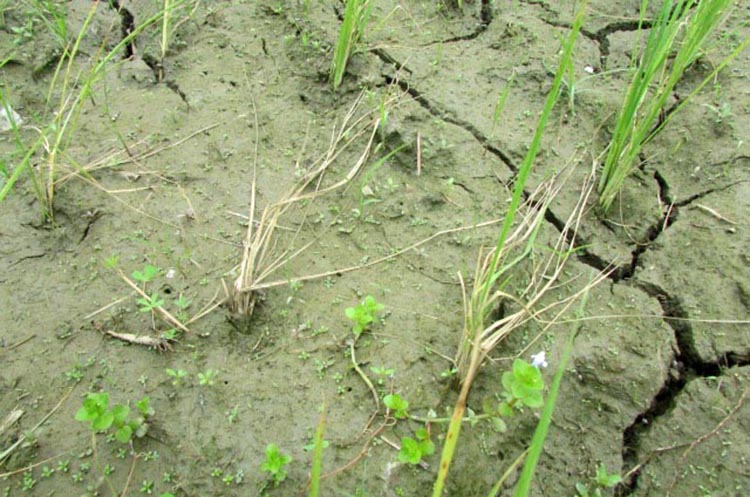 Salam Mia: I was very much upset when my rice in the field was damaged by flood, not only due to loss of crop but also the seed for sowing next year, mentioned Salam Mia of Kasba Atia village. Later on I came to know from the other farmers that rice seedlings were being sold at Alenga market. I purchased seedlings of Nazirshail variety by Taka 1000 for 24 decimal land. In addition, I spent Taka 500 for transport. I transplanted the seedlings in high land. Now the seedlings have got established on the land. However, the sad thing is that the land has got dried up for lack of moisture. Previously, one year before last year the rice fields were submerged due to flood. Last year the crop was good because there was no flood. This year the situation is different. There was no rain for the whole month. The pump machine owner will supply water for irrigation in term of rice sharing. Some farmers have done second time transplanting of rice but it was too late. So the yield of rice will be reduced. I have purchased rice seedlings with high cost only for maintaining rice seed. Agriculture is not for a day, many strategic actions are needed in order to cope with changing situations and survive.

Lal Mia: Only some rice seedlings on 60 decimals of land could survive out of a total of 150 decimals due to submerged by flood, mentioned Lal Mia of Chalatia Village. I had purchased rice seedlings of Nazirshail variety from Silimpur market for gap filling. I had purchased 30 bundles (each bundle contain 100-150 seedlings) by Taka 1500 including the transport. After recession of flood water I transplanted rice seedlings on 60 decimals, 22 days ago. The previously transplanted and flood survived rice plants are now in booting stage. These plants were saved for maintaining seeds. Arrangement has been made for irrigation in the later transplanted area. This plot may not have a good crop and expected yield. All the costly investments have been just to maintain seed. I need seed for sowing next year. Moreover, seed rice is more costly than the normal rice. On top of that it is better to have a crop in order to supress weed infestation on the land. Aman rice is a rain-fed crop. So, there is no need of sharing rice for irrigation. However, this year is different. There has been no rain in Bhadra (mid August-mid September).

Mohammad Roznu Mia: My rice crop on 180 decimals was submerged under water, mentioned Mohammad Roznu Mia, Kasba Atia Village. The local varieties of rice have been some tolerance to water logging. This year the flood water came early. The rice seedlings were very small when the flood came. I was very much upset when the rice fields were damaged. I made a big investment but it was a total loss. I was more frustrated for not only crop but also seed for next year’s sowing. So, I purchased 50 bundles of rice seedlings by Taka 5000. I had re-transplanted on 100 decimals of land. But it is late for Kartikjhul and Nazrshail varieties. I have just done this big investment only to maintain seed.