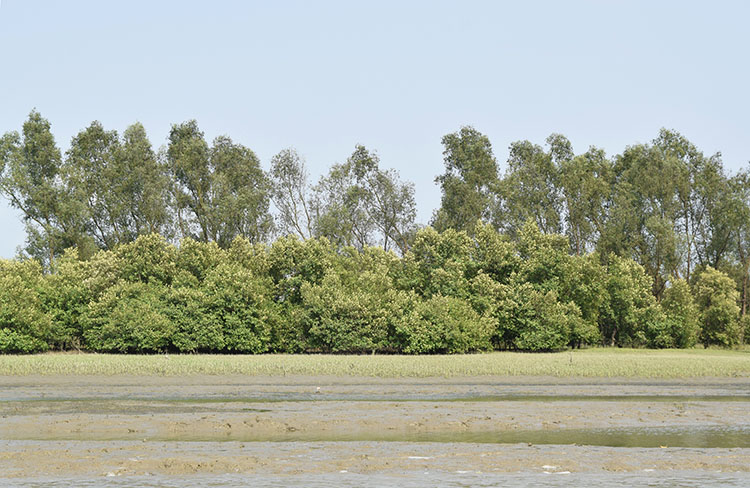 Badarkhali Union of Chokoria Upazila, Cox,sbazar district is located in between the Matamohuri river and the Maheskhali channel. This union is prone to cyclone and tidal surge. Heavy damage to life and property had happened due to the cyclone in 1991. Badarkhali Union is a part of the recently eroded Chokoria Sundarbon. Chokoria Sundarbon was a natural flora and fauna and was the support for long chain of animal life, fisheries, important food source of birds and other mammals. Mangrove forest is unique in its abilities to store a wide range of nutrients and plays important role in nutrient re-cycling. But complete destruction of Chokoria Sundarbon happened during 1970-1980 with the introduction of export oriented shrimp culture and establishment of shrimp fields along the river Matamuhuri made Badarkhali Union vulnerable to natural calamities. The people realized the importance of mangrove after the devastating cyclone of 1991.

UBINIG had established five kilometers mangrove in in two phases with collaboration of Badarkhali Cooperative Society and Badarkhali Union parishad in 1994. Human, animals and other resources were saved from the devastation of cyclones that appeared after 1994. In 2017 mangrove plantation was established in additional 30 acres on nearby accreted land. People in adjoining three villages have been benefited from these establishments. 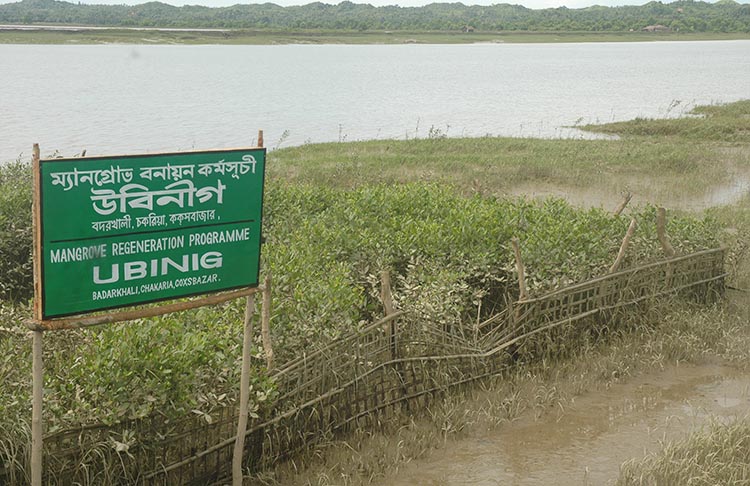 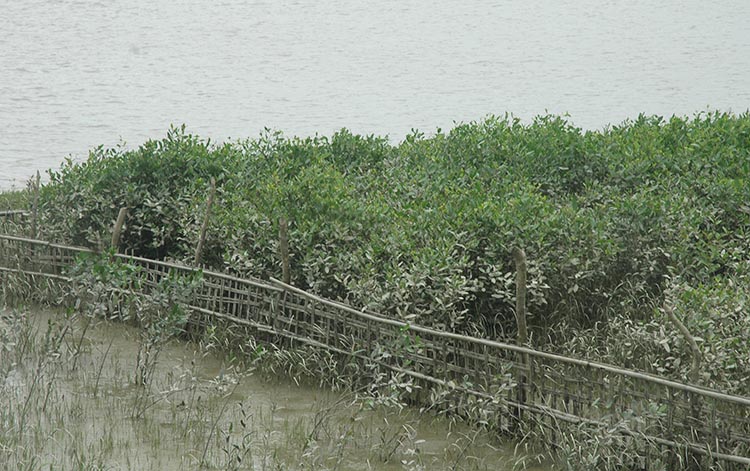 This region is blessed with natural flow of high tide and low tide. The people in this region have been living with adjustment and accommodation with the coastal environment.

With destruction of mangroves, several important tree species are perceived by the community to be lost. These are 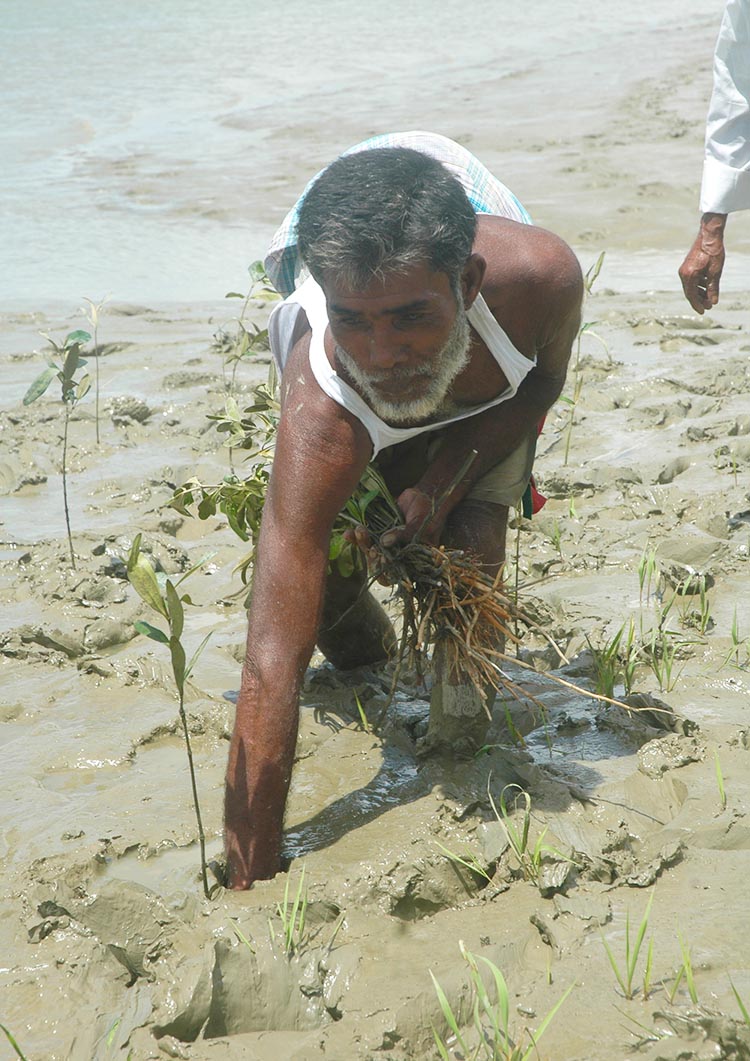 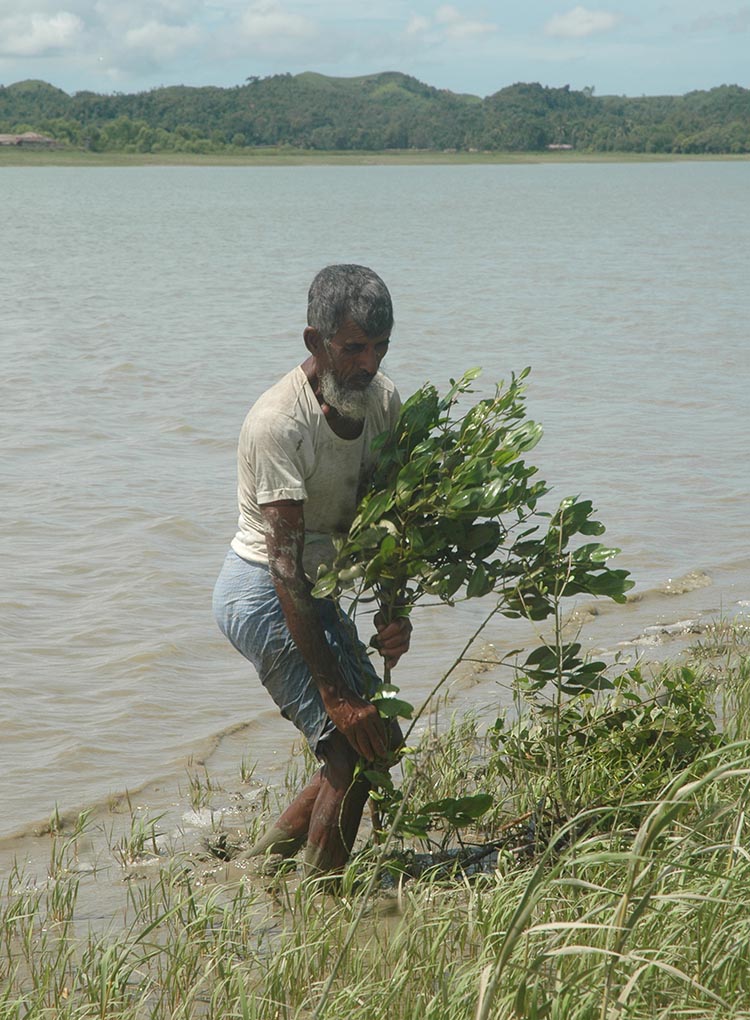 Loss of Birds in mangrove:

Similarly, several birds species are not see any more because of the mangrove destruction. These are:

A new mangrove nursery has been established this year. Sixty thousand seeds were sown in the new nursery. About 80% of the seeds germinated. This included seeds of Keora (Sonneratia apetala ) and Bain (Avicennia officinalis). These saplings were transplanted in 150 acres of land in the area starting from Badarkhali bridge (popularly known as Maheshkhali bridge) extending down to about two kilometers in the south. This plantation forest of Keora and Bain is expected to save about 35 thousand people in parts of Badarkhali, Tutiakhali para, Lombakhali para, Khalkacha para and Mognama para from cyclone..

Collection of the mangrove seeds

These seeds were collected with the help of the students of the Badarkhali Shikhipori Bidyalay, Government Primary School and local interested people.

Activities prior to germination of mangrove plants:

The collected seeds were staked for about a week under shade with cover. After seven days the seeds were sun-dried and then sown in the nursery. Each single seed was dibbled under muddy soil. The nursery was fenced with net and bamboo stick after sowing seeds. The seedlings in the nursery were prone to damage by people engaged in catching shrimp fries, goat and other pests.

The sown seeds germinate and seedlings emerge in a period of 15 days including seven days of jo (high tide) and seven days of dala (low tide).The saplings were transplanted with the help of the students of Shikhipori Bidyalay, Government Primary School and local interested people.

Setting up of Mangrove Nursery

After one month the saplings were ready for transplanting. In the Bangla month of Vadra (mid August-mid September) there will be amalgamation of saline water and fresh water in the river and that is the proper time for transplanting saplings on the soil.

Seeds of mangrove tree species in the nursery:

With Climate change the frequency of cyclone possibilities have increased. At other times the rainfall is not at a normal pace. The communities living in this area know the benefits of Mangroves and in the community meetings they have mentioned those with great passion.

Here are the few points:

1. New char land has come up due to the presence of the recently established mangrove. Char land has risen up. The people of Three villages namely Bazar para,Tutiakhali para and Lombakhali para are of the opinion that the mangrove plays important role in protesting the people and their resources in the face of devastating cyclones and tidal surges. Accordingly they approached UBINIG for establishing mangrove plantation. The seeds of mangrove plantation are harvested from the previously established mangrove forest. The seeds are saved in a shady place for a week. In the meantime, land is selected and fenced for establishing nursery. Then after about a week the seeds are sown in the nursery. Now those saplings have grown about two feet high. Preparations are under way for transplanting the saplings in the char land.

2. Embankment is saved. The mangrove stands as a security guard for the coastal embankment and the people inside.

3. Fish resource is under threat of climate change. Mangrove is the spawning ground of fish and other aquatic fauna. It is believed that the biological diversity living in the marine area nearby spend a part of their life in the mangrove.

4. The leaves, bark and honey of flowers are feed for insects, birds and other animals. For example, the goats go to the mangrove to eat the leaves of keora ( Sonneratia apetala), bain (Avicennia officinalis) and grasses. The trees in the mangrove are the safe shelter of many species of birds.The fruits of keora are eaten by men. The fruits are also used for making pickles.

5. The coastal people are dependent on the mangrove forest for the supply of fuel wood. The trees are also the source of timber for furniture and housing.

Mangrove protects us from tidal surge. The coastal embankment remained un- affected due to the Mangroves. We were saved in the cyclones of 1997-1998. The mangrove is the safe shelter of birds. We collect many food items from mangrove. The fishermen take shelter in the mangrove in the face of cyclones.- Shafi Alam

We get many benefits from mangrove. We graze cows and goats in the mangrove. We depend on mangrove for many of our essential supplies. Mangrove is our security against natural hazards.- Joynal Abedin

Mangrove is a source of supply of feed for many animals and birds. We also harvest some fruits from mangrove plants for our consumption. Saplings raised in the nursery will be transplanted in the newly accreted char land. The new char land is three kilometers in length and 300 feet width measuring about 30 acres. - Kabir Ahamed

– the experiences of farmers in Cyclone Titli and Gaza

People in the coastal areas remain in a situation of panic with the threat of cyclones. In last 6 October, 2018 a Cyclone named as Titli (Butterfly) has crossed over Badarkhali. According to newspaper reports (Daily Star, 11 October, 2018) a deep depression in the Bay of Bengal has turned into a severe cyclonic storm named “Titli”, which moved north-northwest towards the coasts of Andhra and Odisha in India.

Bangladesh Meteorological Department directed the maritime ports in Chattogram, Cox's Bazar, Mongla and Payra to hoist local cautionary signal No 4 as the sea would be rough due to the cyclone on 10 October, 2018. According to meteorologists in Bangladesh, Titli may affect the Sundarbans. 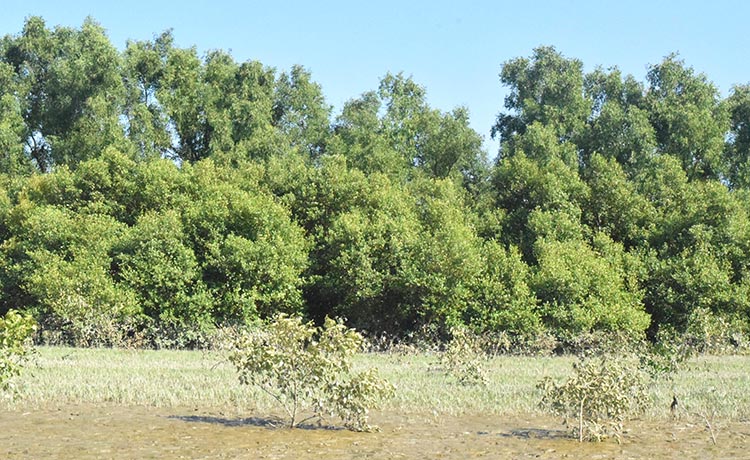 All fishing boats and trawlers that ply over the North Bay and the deep sea have been advised to remain in shelter until further notice.

In a 64km radius of the cyclone's centre, the maximum sustained wind speed was about 90kmph, rising to 110kmph in gusts. The sea would remain rough near the system centre, said the special bulletin.

Although the community in Badarkhali was not aware of the effects of Titli in Andra and Odhisha in India, they heard over radio on 11 October that Titli was 800 km on the south of Bay of Bengal coast. The community felt to be lucky that finally it did not hit Bangladesh and passed over to India. In November another cyclone was created named “Gaza”. Both the cyclones did not hit Bangladesh but during passing over to India it had effects on the tidal surge. The wind speed was 60 – 80 km/h damaging many trees and houses .

The community members identified the benefits of Mangroves during the rainy season. Due to Climate change, the rains have become unpredictable. During rainy season there is lot of rain and overrain creates water-logging as water cannot recede into the river. In the coastal area there high and low tide and these are enhanced during full and new moon time. In addition there is Flash flood from the Hills in the surrounding areas leading to water-logging in the villages. But the mangroves have protected the community from such problems. 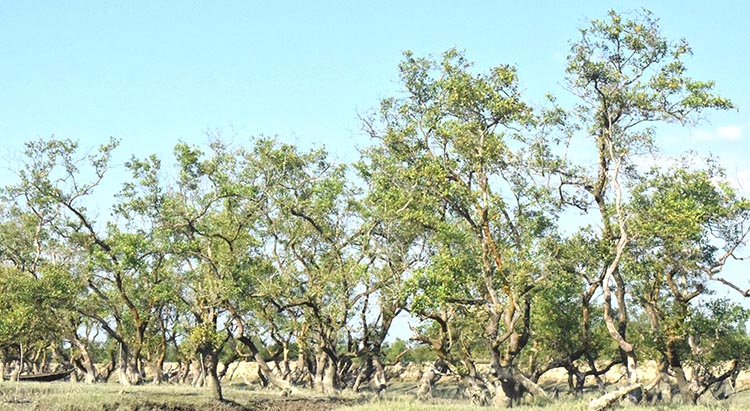 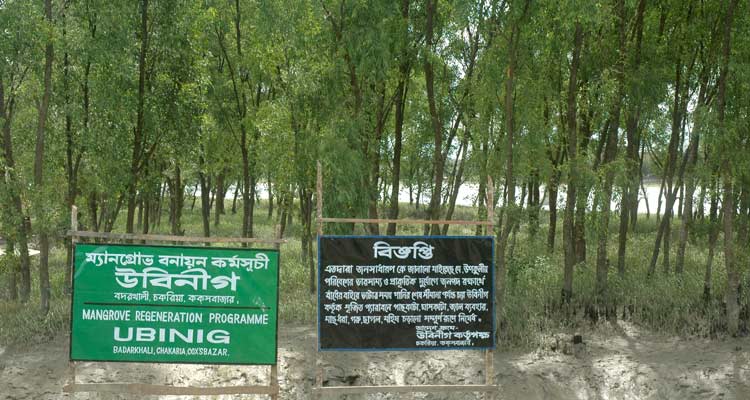