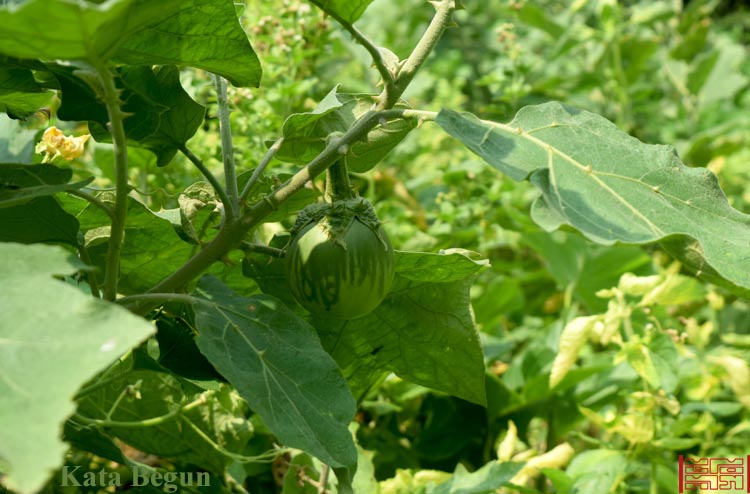 In the month of Ramadan (fasting by the Muslim communities for a month), the demand for brinjal/eggplant/aubergine is the highest as it is one of the most popular item, the Beguni, for Iftar time (breaking of the fast in the evening). Chola (black gram) Peyaju (fried lentil mixed with onions) and Beguni (fried eggplant mixed with beson, the gram powder). Health professionals do not recommend these fried items for empty stomachs after a whole day of fasting. However, from the rich to the poor, Iftar is incomplete without chola-peyaju-beguni on the plate.

This Ramadan, starting on 25th April, is different from all other years. The country is going through an undeclared “Lockdown” amid COVID-19 pandemic. The first COVID-19 infection detection was on 8th March with 3 cases, but since April 9, number of infection numbers started rising to detection of more than 100 cases per day. Since April 25th, there has been sharp increase over 400 cases per day. The latest statistics, as of 10 April, was 887 new cases in last 24 hours, total confirmed cases were 14,657 and total deaths were 228. The situation is worsening.

The vegetables farmers, growing brinjals, have faced problems in marketing of their produce in the early part of April due to the shutdown of transports and the restricted market time. The vegetable farmers, particularly those growing tomato, incurred huge loss. The brinjal farmers, on the other hand, initially faced difficulty in selling but as soon the market was relaxed for Ramadan, they got better price.

UBINIG initiated a quick survey over phone with farmers in eight districts and consumers in Dhaka to investigate how farmers were faring during this critical period with brinjals. Brinjals are sold at the range of Tk. 35 to Tk. 80 per kg. in different markets. In normal time during Ramadan it could be as high as Tk. 100 – Tk.150. However, this year demand is less as major Iftar sellers on the street and restaurants are closed. Yet farmers are not complaining as brinjals still are fetching a ‘better’ price compared to other vegetables.

Bangladesh is among the few known countries of origin of brinjals. Russian scientist Nikolai I. Vavilov in 1926 was of the opinion that brinjals centre of origin was in the Indo-Burma region, including the present Bangladesh (Cultivation of brinjal, 2012). There are 248 varieties cultivated in different agro-ecological zones of the country (Hossain, 2007). Bangladesh always enjoyed the diverse varieties of brinjals.

Consumers buying brinjals from the market usually show no concern about the varieties, except the size, colour and shape. But brinjals are in the market not as shapes and colours as an industrial product, it comes as genetic diversity. In early May, 2020, at least 26 different local varieties with beautiful names, specific to their agro-ecological locations, were found in the markets. For example, in Noagaon the varieties are Alta Bulbuli, Lodha Begun, Ghia Begun, Kanai Begun, Shoila Begun, Ramchandrapuri, jhumka etc; in Jessore, local varieties such as Makra, Bhangor, Baropata and Kata Begun are found. The price varies according to varieties, since each is valued not only by the supply and demand matrix but more for the taste and local culinary culture. Shingnath brinjal is sold at a price of Tk. 40 – Tk. 50 per kg, Chakra, Lafa and Kata begun are over Tk. 50 to Tk. 100 per kg.  (Local brinjal ubinig photo Stories)

On the other hand, few HYV variety known as Jessori and IRRI begun were found in Jessore and Kushtia and two Hybrid varieties (China-3 and Ired) were found in Kushtia and Natore. The price of HYV brinjals was Tk. 25 –Tk. 50, and that of Hybrid was Tk. 45 – 55 per kg. Commercial farmers grow the HYV varieties on large scale, while the small farming households grow local varieties on a smaller scale in their small pieces of land. Interestingly, they are very visible in the markets and have good demand. Some local varieties are grown as surplus to earn cash for the farmers and therefore appear in the market.

The promotion of HYV varieties is a government policy and detrimental to the maintenance of genetic diversity that is very important for the economy of subsistence farmers and is contrary to policy to provide safe food to consumers. Such a policy also contradicts government responsibility to conserve biodiversity. The policy or subsidies and support by the Department of Agriculture go only for the HYV/Hybrid varieties. So a large number of commercial farmers use their land for cultivation of HYV/hybrid brinjals. But many farmers having small pieces of land cultivate as many local brinjal varieties because of their taste and non-requirement of any external inputs.

The Bangladesh Agricultural Research Institute (BARI) has introduced in 2014 four different genetically modified brinjals (Bt brinjal) to resist the fruit and shoot borer pest (FSB), thereby reducing the need to use pesticides despite protests from the international scientists, environmental and farmers groups because of environmental, health and biosafety concerns. Unfortunately, the Cornell Alliance for Science, a public relations campaign to promote genetically engineered foods and pesticides, is promoting the findings of research conducted jointly by the International Food Policy Research Institute (IFPRI) and Bangladesh’s Agriculture Ministry. According to this research, “Bt brinjal has performed well in the Bangladeshi market due to its high quality and the lower levels of pesticide used in cultivation. Smallholder farmers have rapidly adopted the crop, from just 20 in 2014 to more than 27,000 across all districts of Bangladesh” (Conrow, 2019). On the contrary, an UBINIG report showed failures of the plants to produce fruits and use of 35 types of pesticides, including acaricide (kills ticks and mites), insecticide, and fungicide, sprayed several times in the Bt brinjal fields under the direction of the supervising officials (UBINIG, 2015) . It is to be noted that the Cornell Alliance for Science receives $12 million in funding from the Bill & Melinda Gates Foundation (Malkan, 2019).

The scientific research on pest attacks in brinjals show that fruit and shoot borer (Alam & Sana, 1964) . Leucinodes orbonalis Guen. is the key insect pest of brinjals in Bangladesh. The intensity of infestation by FSB may go over 90% (Ali, M.I., M.A.S. Ali, M.S.Rahman , 1980) and estimated the yield loss up to 86% (M.I.Ali, A.K.M. Khorsheduzzaman, M.A. Karim and A. Ahmed, 1996) . But these scientific researches never recommended the need for genetically modifying brinjal to control FSB.

Since 2014 UBINIG, in its field investigation, has found the Department of Agricultural Extension (DAE) imposing Bt brinjal on farmers often with claims without any scientific evidence on its agronomic value. The instrument of imposition accompanied by providing some inputs and cash supports. Many farmers tried the GMO Bt brinjal variety because of the pressure of agricultural extension officers, but once taken and with bitter experience of performance failure, the farmers were reluctant to cultivate as they experienced negatively. Second, despite the claim of the GMO promoters of reduced pesticide use, farmers in fact had to use pesticides. The GMO is specific to FSB, but does not protect the plant and fruit from other pest attacks (UBINIG, 2019) .

During the Covid-19 pandemic locked in, UBINIG investigated if farmers, like other brinjals, were bringing Bt brinjal to the local markets. The Bt brinjal seeds (Bt brinjal 1,2,3 and 4) were given to farmers in different areas in December 2019-January, 2020. If the claim of International Food Policy Research Institute (IFPRI) and Bangladesh’s Agriculture Ministry is true that 27,000 small holder farmers were cultivating Bt brinjal across all districts of Bangladesh, then it is reasonable to expect that the new genetically modified crop should be in the market and would be visible. The markets in 8 districts and in Dhaka showed no presence of any Bt brinjal in late April-early May 2020. None of sellers in the market could identify any Bt brinjal in their stock. No buyer in Dhaka market could identify any brinjal, which would be a GMO.

Could it be that those were without any labels? In that case it is a clear case of violation of government direction about GMOs in the country. We know that the field cultivation of genetically modified brinjal (also known as Bt brinjal) was conditional. In October 2013, the National Committee on Biosafety (NCB) imposed seven conditions to be followed in field cultivation (UBINIG, 2013). One of these conditions was labeling -- if Bt brinjal is brought to the market, they must be labelled, i.e., it should be clearly stated if it is GMO. The Director General of BARI only agreed to label the sacks as “poison-free GM brinjal” (Akhter, 2016).

The Bangladesh Food Safety Authority (BFSA) member Monzur Morshed Ahmed said in a workshop that in Bangladesh, law makes it mandatory for GM food labels to declare their identities but it was being flouted at the marketing stage. Labelling requirements established by regulations are currently being sidestepped. He added that “consumers should be ensured an enabling environment allowing them to pick out what they want and do not”. The BFSA Chairman said, "Every product, be it packaged, processed or imported, must have a declaration stating whether this is GM or not. We will issue a directive in this regard soon” (Report, 2020). But no brinjal is found in the market with any label of Bt brinjal; the sellers have no idea or never heard of it.

So the claims of Bt brinjals cultivated by thousands of farmers are either false, a total lie or a stark violation of law and the government directives. Is there any authority to check on this aspect? In the case of COVID-19, could GMOs cause more harm as it concerns food systems therefore immunity as well as bio-safety and bio-security? These questions are always silenced and remain unanswered.

Hossain, M. A. (2007). The Second Report on PLant Genetic Resources for Food and Agriculture of Bangladesh: The State of activities . Dhaka: Bangladesh Agricultural Research Council, Ministry of Agriculture.

Malkan, S. (2019, November 13). Cornell Alliance for Science is a PR Campaign for the Agrichemical Industry. Retrieved from USRTK (U.S.Right to Know): https://usrtk.org/our-investigations/cornell-alliance-for-science-is-a-pr-campaign-for-the-agrichemical-industry/

UBINIG. (2015). Bt brinjal is under Life Support: Experiences of farmers in second round cultivation. Dhaka: UBINIG.