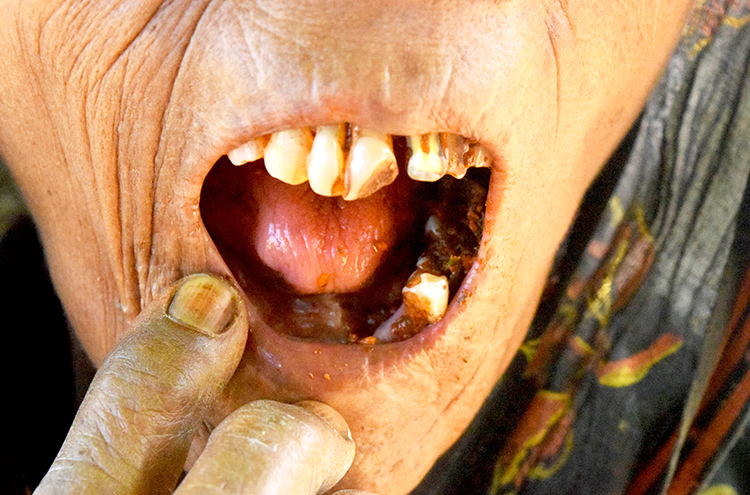 The Smoking and Tobacco Use (Control) Act. 2005, amended 2013 has included three smokeless tobacco products (Zarda, Gul and sadapata) in the definition of tobacco products, bringing these under law to regulate their use.

Forms of use of Smokeless tobacco

It has tobacco (Motihar variety Nicotiana Rustica). Zarda and gul have other ingredients including for attractiveness, addiction, additives, chemicals and other plant materials and thus becomes more socially acceptable as a non-tobacco product. 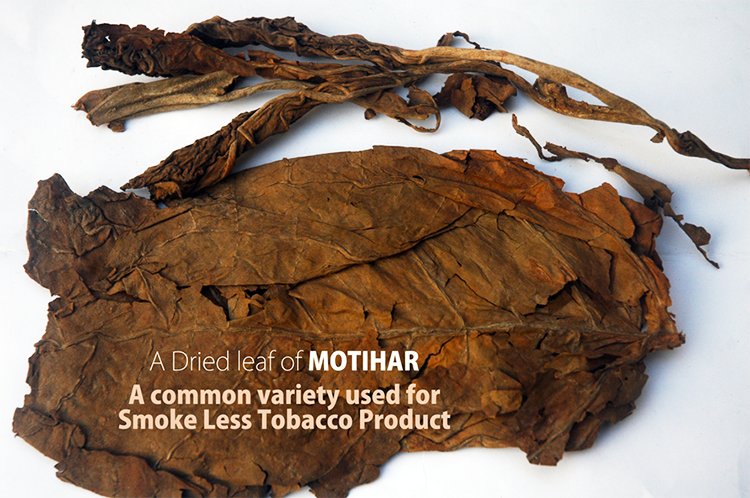 Like cigarette, smokeless tobacco, particularly Zarda used with betel quid has tobacco as the main ingredient. The Tobacco leaf variety is Motihar, Nicotiana Rustica, is native to Bangladesh and cultivated in the northern districts of the country.

Article 9 & 10: Ingredients must be disclosed

BUT 62% of Zarda brands have no disclosure of Ingredients

Out of 109 brands of Jarda, ingredients names were available in only 37% (41 Zarda) brands. No information available for 67 brands of Zarda (62%). In some cases the printing is too small that it is not readable [UBINIG-Tabinaj, 2016]

A Tabinaj investigation of 288 users in 19 districts shows:

As consumption of betel quid with zarda is not a socially prohibited act, the starting age paan-zarda is low and is influenced by her socio-economic conditions.

The users (288) in the survey were found to start at an early age of less than 20 years (43%); however the majority (79.5%) started between 20 to 30 years. This means, most women started using betel quid after marriage. About 14% started when they were over 31 years old. Very few (6%) women started over 40 years. Those who are current users they have been consuming paan with jarda/sadapata for over 20 years.

How they started? 47% started through serving paan to the elderly family members, mother, mother-in-law, grandmother. Mother-in-law plays more important role than own mother, because most start taking paan after marriage, at the insistence of the mother-in-law or through serving her. Only 4% got the habit before marriage through grandmas. 36% through other elderly famiy members like father, grandpa.

Health effects: According to Dr Shakhawat Hossain, Oral and Maxillofacial Surgery physician, Bangabandhu Sheikh Mujib Medical University (BSMMU) consumption of tobacco products with betel leaf for long may end up in fatal diseases like cancer and chronic liver diseases. "Women can give birth to autistic children due to consumption of lead adulterated smokeless tobacco," said the doctor, adding they are now getting more patients with mouth cancer. [TBS Report]

No woman consumes Zarda for its addictive nature, but after long term consumption, she develops addiction.

Shefa (23) a domestic help in Dhaka city, uses Bou Zarda because it has a sweet smell and the price is low. Shefa buys paan with Bau Zarda 5 times a day. Her monthly expenditure on Pan with Bau-Shahzadi Zarda is Tk. 400 (4 USD). It is packed in plastic container without any disclosure of the ingredients in it. No price is mentioned on the pack of this zarda. 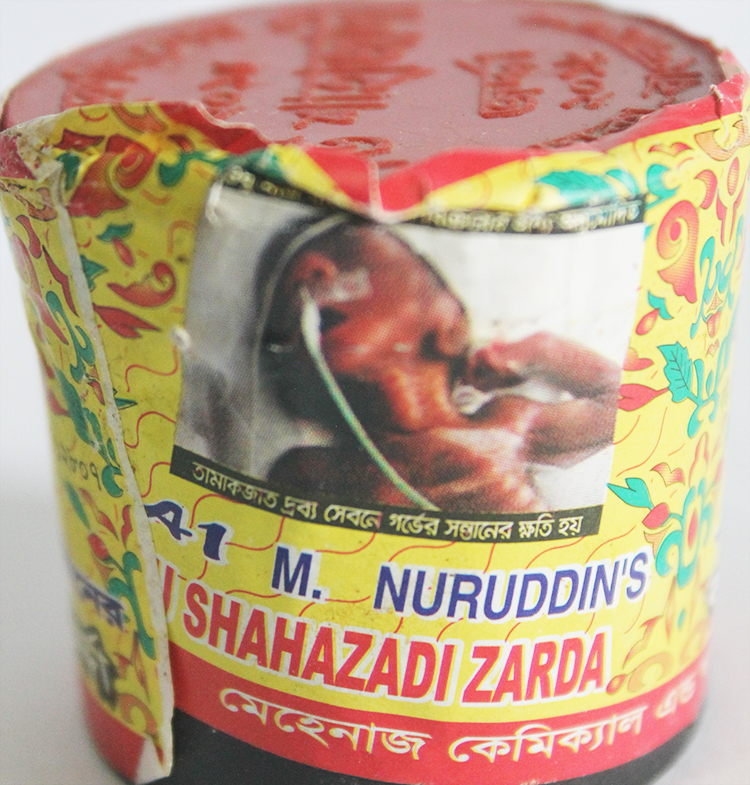 Bau-Shahzadi Zarda is one of the 22 of the Zarda brands which contained heavy metals like lead, cadmium and chromium according to the Bangladesh Food Safety Authority (BFSA) [TBS Report] .

Company Tactics of exploiting socio-cultural acceptance and the poor

Dominating Zarda brand in the market
Case of Hakimpuri Zarda

Hakimpuri Zarda is one of the most “popular” Zardas in the market popular among users across the country. The company Kaus Chemical Works Ltd. offers discount of upto 2.5 million BDT (30,000 USD) for a turnover of the brand at an amount of 40 to 50 million (47 to 48,00,000 USD).

The owner Haji Mohammad Kaus Mia, has different business ventures. Hakimpuri Zarda is one of them, since 1978. Kaus Mia has been awarded 4 times by the National Board of Revenue as a top taxpayer and received Tax card (Sujan Mia) which enables him to receive various government priority facilities as a tax card holder. "Questions are often raised why the large businessmen are not getting tax cards when a jarda (smokeless tobacco) selling businessman, Kaus Mia, is getting the highest taxpayers award."[FE Report] 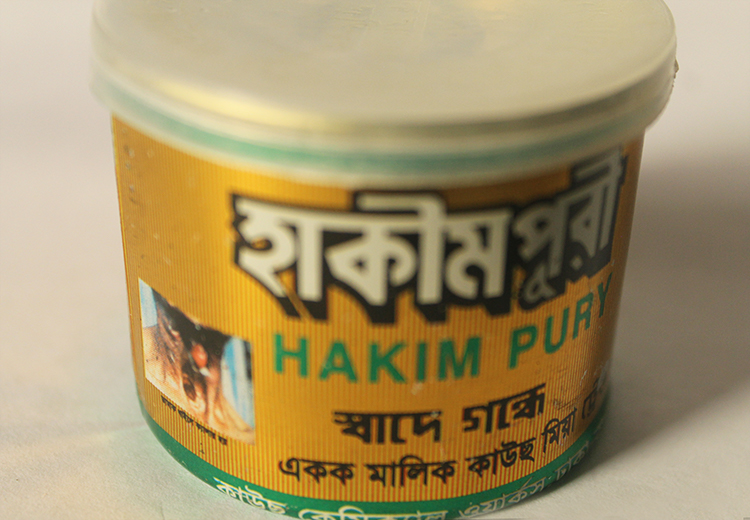 Among many others, the most popular brand, Hakimopuri Zarda, does not disclose the ingredients on the package of Zarda it sells thge most. It says only, “sade-Gondhe” – a deceptive promotion of taste and smell that comes from the use of ingredients.

In 2019 a case was filed against Hakimpuri Zarda at Pure Food Court of Dhaka South City Corporation (DSCC), as heavy metals like lead, cadmium and chromium was found in it.

Bangladesh Food Safety Authority (BFSA) has collected different types of zarda, a smokeless tobacco, in two phases and tested these in lab where it was revealed that the 22 zarda products contain heavy metals. Per kilogram of Hakim Pury products have 26 milligram of lead, 0.95 milligram cadmium and 1.65 milligram of chromium, according to the food safety authority. [TBS Report] Since this product contains high levels of heavy metal, they should be banned.

Tobacco1.com, the international portal for worldwide Tobacco Industry and an active business-to-business website for all Tobacco Suppliers and their products deals with 921 chewing tobacco suppliers. https://www.tobacco1.com/ From Bangladesh, they supply 10,000 pieces of 12 chewing tobacco brands at a price of 1$ /piece.

One does not know if they are disclosing any harmful chemical used in those Zarda.

The global data of EximPulse.com of 62 countries, https://www.eximpulse.com/export-product-zarda-country-BANGLADESH.htm shows Bangladesh exporting 3 brands of zarda such as Tulshi Zarda, Gopal Tobacco and Zarda A.P. I exported through Bangladesh-India land border of Benapole and loaded on Petrapole, the Indian land border on the otherside. Among the 10 items of import listed in Petrapole Land Port Authority of India, zarda is not listed; only betel nut is listed. http://www.lpai.gov.in/content/innerpage/icp-petrapole.php

Other business entities in Export & Import such as Zauba https://www.zauba.com/ is engaged in exporting zarda from Bangladesh to USA and other destinations. Countries such as the USA have strict standards regulating products with heavy metal. It is unclear how these products pass the USA standards.

Zarda as a Smokeless tobacco product is under the national tobacco control law, but its supply side is completely unregulated and the companies are taking advantage of social & cultural acceptance; thereby expanding their market at national and international level. As a result, at the national level women are exploited as workers in the cultivation of the leaves, zarda production in the factories and as consumers. At the international level, overseas women workers, expatriates in Europe, US, Canada and other countries are affected with health impacts through exports of zarda by the international companies.

1. The national tobacco control law must be effectively implemented for regulation of use of smokeless tobacco. The companies must disclose ingredients containing harmful chemicals following Articles 9 & 10 of FCTC.

2. The production of zarda from leaf production to zarda manufacturing must be brought under licensing and registration.

3. The export of smokeless tobacco must be brought under the national Export regulations imposing export duties.

4. Women as workers in the zarda leaf production, zarda factories and as users must be protected against health hazards and against discriminations in wages.

This fact sheet was supported by the STOP project, an initiative of the Bloomberg Philanthropies

Produced by UBINIG (Policy Research for Development Alternative), a policy research and campaign organization in Bangladesh. It has worked jointly with TABINAJ – the Alliance of women against Tobacco formed with more than 100 women’s organizations in 64 districts of the country. 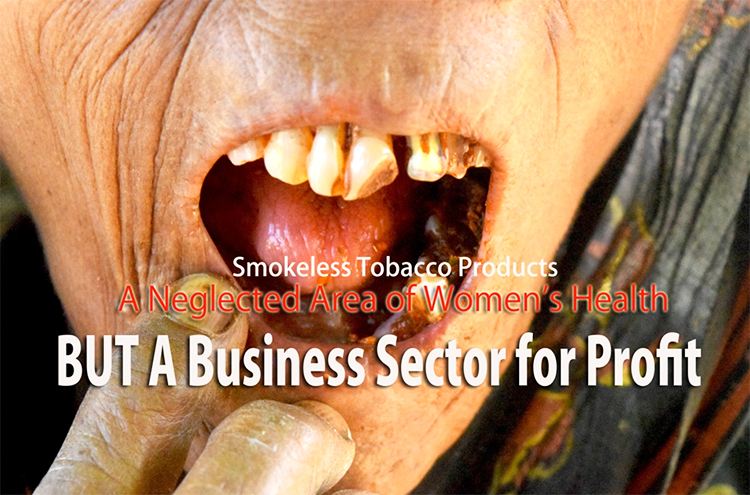