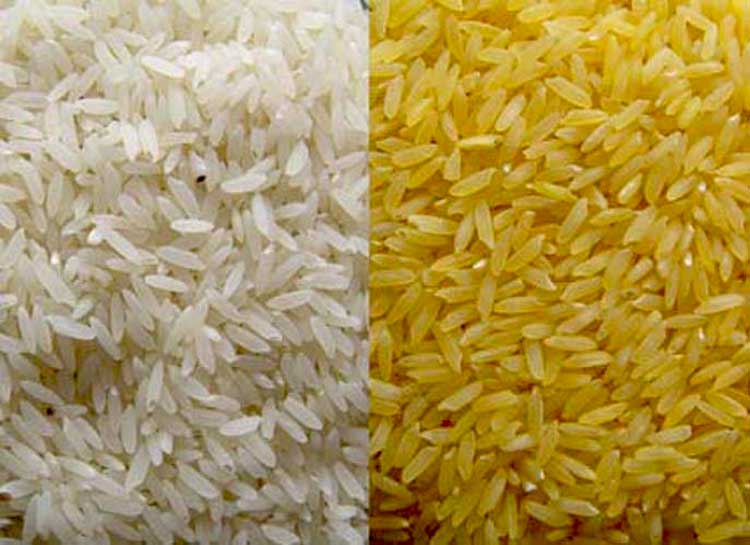 While the farmers organisations around Asia were demanding that 50 years of International Rice Research Institute (IRRI) is Enough, and during this time it has contributed more to the destruction of our rice diversity than to increase it; it is heartening to see that in Bangladesh it was celebrated with much high importance with the Prime Minister Sheikh Hasina inaugurating the ceremony held on 14 July, 2010. The celebration was marked by an event attended by around 500 scientists, policy makers and government personalities, and organized by Ministry of Agriculture and IRRI. Prime Minister Sheikh Hasina appreciated agriculturists for developing salinity, drought and submergence tolerant rice which claimed combating the natural calamities and changed climate conditions and sustain food security in the country. Concerns are raised that this is an entry point for introducing the Genetically Engineered Rice varieties in Bangladesh with full support from the government and ignoring the critics not only in Bangladesh, but around the world. So far, there is no evidence-based research that such Stress resistant varieties can really help meet the stress conditions and also solve the hunger problem. Unfortunately our Prime Minister, the Minister of Agriculture and relevant policy makers are given information of hi-tech solution as the ‘only solution’ meeting climate change situations, whereas there as there are many scientists in this country and the farmers who have more concrete evidences of using our local varieties of rice which can meet stress conditions. But their voices are not heard. 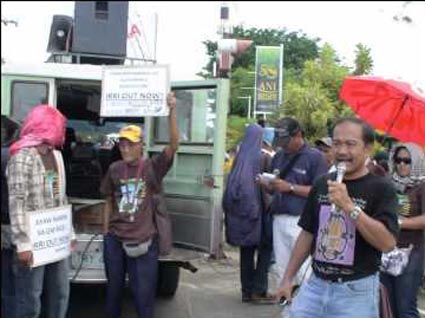 The IRRI Director General Dr. Robert S Zeigler was present in the occasion. He highlighted the importance of breeding new varieties with appropriate new traits to “feed the increasing population of Bangladesh”. Again this is a common jargonistic claim without any evidence. He mentioned that Bangladeshi scientists developed few stress tolerant hybrids and varieties BR-40, 41, 47, 51 & 52; BINA-8 and BINA-9 using genes shared by IRRI. He assured that IRRI will continue to strengthen the cooperation with BRRI for developing appropriate varieties the country will need. But where did IRRI get the genetic materials from? He forgot to mention that these were actually collected from farmers of Asia, including Bangladesh.

The International Rice Research Institute (IRRI) was set up in 1960, entrusted by the United Nations to safeguard the diversity of the world's rice germplasm at its International Rice Gene bank, and mandated to support the development of rice research within national agricultural research systems (NARS). It is the self-proclaimed "home of Green Revolution in Asia"; the central institution through which the Green Revolution model for rice expanded throughout Asia in the 1970s. Bangladesh inherited this model from the earlier government of Pakistan, when Field Marshal Md. Ayub Khan introduced the so-called ‘modern agriculture’ or green revolution with prescription from the World Bank in 1965.

What are we celebrating about IRRI in Bangladesh in 2010? IRRI has contributed to the increased use of chemical fertilizer, pesticide, use of ground water and various mechanised tools for threshing, husking etc. displacing the poor farmers and women in particular from farm works. Since its inception IRRI has collected (or pirated!) thousands of traditional rice varieties from our countries, but has been able to offer only 52 varieties and thereby responsible for narrowing the genetic diversity of rice. Because of government and the donor support to the cultivation of IRRI varieties, most of the land has been brought under cultivation of these varieties. The ‘miracle’ rice IR-8 and other HYV varieties often known as Modern varieties were promoted to solve so-called ‘hunger problem’ in the poorer Asian countries, but unfortunately it failed because of its nature of monoculture farming with extensive use of pesticides, chemical fertilizers etc. The Boro rice production has contributed to the destruction of the production of other major food crops such as lentil, pulses, oil seeds, vegetables etc. The claim of high yield of the modern variety also started to show declining productivity and increasing use of inputs to maintain the yields. According to World Bank studies ‘The results of long term trials by the Bangladesh Rice Research Institute (BRRI) also indicate that intensive rice cultivation can result in declining yields, even under good management and with full recommended doses of all nutrients being applied’. BRRI, the affiliate institution of IRRI has failed to provide support to farmers at the time of their need rather they have been providing the access to the collected germ plasm of rice to the multinational corporations without any permission from the farmers, the genuine owners of the germplasm. In order to get a local seed variety from BRRI, a farmer or even any legal research institution has to go through a lengthy process of making MOUs, but surprisingly the multinational corporations can get it very easily.

This is a common complaint in many countries of Asia. IRRI has actually opened up to the corporations since 2000 through the formation of public-private partnership with Syngenta and several national research centres to develop and commercialise a genetically engineered (GE) rice with a high Vitamin A content, known as Golden Rice. We already know that The Golden Rice Network is coordinated by IRRI's Gerard Barry, who was formerly an employee of Monsanto. Now with IRRI’s 50 years celebration, Bangladesh gets the bad news from its Director General that it will ‘bring Golden Rice into Bangladesh’. What a golden opportunity to announce that! In an exclusive interview with Prothom Alo, Ziegler said that promoting the Golden rice developed in the US to the farmers of Bangladesh is its biggest plan (Prothom Alo, 16 July, 2010 interview by Iftikhar Mahmud).

Undoubtedly, Golden Rice is a genetically modified rice, which must go through the process of regulatory mechanism guided by the Cartagena Protocol on Bio-safety (CPB) which Bangladesh has ratified. The National Bio-safety Framework (NBF) in Bangladesh has been developed in 2006 following an extensive assessment of biotechnology and bio-safety but the last draft of the framework in 2007 (i.e. during the unconstitutional Caretaker government) was not at all satisfactory to the Environmental activists in Bangladesh. Now it is called Biosafety Rules, 2010 which was also not very satisfactory to protect our diversity and the environment. It is very strange that Mr. Ziegler announces introduction of Golden Rice without any reference to the Biosafety regulations in the country.

While in almost every respect we see that the present government does not like to follow what has been done or initiated during the previous Four-Party Alliance government led by BNP, but in the case of introducing genetically modified seeds, there seems to be no problem in carrying on the unfinished task of the former Agriculture Minister MK Anwar, who said in a BBC interview that the government ‘does not object to GM technology, which may prove beneficial’. The Agriculture Minister, MK Anwar, however, acknowledged GM foods are controversial worldwide, but his government will not take any stand against the technology. He told BBC on 18 January, 2005 that "We will introduce GM rice in Bangladesh after proper testing and going through the national and international rules and regulations". Research into the crop, at that time was being carried out at the Rice Research Institute. UBINIG, Nayakrishi Andolon and many other environmentalists have protested against the government decision.

It seems that Syngenta and IRRI continued their trials and instead of proving that Golden Rice is indeed going to solve problems and will not cause hazards to our local varieties, they are still making claims that are yet to be proved. In many Asian countries it has been rejected by farmers’ organisations on the ground that it is an ‘inappropriate and ineffective solution’. It is known that there ample sources of Vitamin A in fruits and vegetables, which are plentiful and can be made available in our country. Solving the problem of night-blindness or Vitamin A deficiency is not a technological issue, it is more related to poverty and balanced food intake. The company patented Golden Rice or the so-called Vitamin A rice, is not at all going to solve the problem, rather it will make the country more vulnerable in terms of dependency on the company.

We urge upon the government not to take actions that can make the farmers and our genetic diversity at stake. According to international organisation Friends of Earth, scientific data shows that even if golden rice is ‘successfully’ introduced, it will likely do little to ameliorate VAD because it produces so little beta-carotene – just 1.6 micrograms per gram rice (µg/g) at present, with a goal of 2.0 µg/g. If the scientists reach this goal, a woman would need to eat 16 lbs. of cooked rice every day in order to get sufficient Vitamin A, if golden rice were her only source of the nutrient. A child would need 12 lbs. More realistically, three servings of ½ lb. cooked golden rice per day would provide only 10% of her daily Vitamin A requirement and less than 6% if she were breast-feeding. Yet even these modest contributions are uncertain. In order to absorb beta carotene, the human body requires adequate amounts of zinc, protein and fats, elements often lacking in the diets of poor people. Those with diarrhoea – common in developing countries – are also unable to obtain vitamin A from golden rice.

Bangladesh must follow The Cartagena Protocol on Biosafety to the Convention on Biological Diversity, a supplementary agreement to the Convention on Biological Diversity, which entered into force in 2003. This international treaty is responsible for governing the movements of living modified organisms (LMOs) resulting from modern biotechnology from one country to another. The objective of this Protocol is to contribute to ensuring an adequate level of protection in the field of the safe transfer, handling and use of living modified organisms resulting from modern biotechnology that may have adverse effects on the conservation and sustainable use of biological diversity, taking also into account risks to human health, and specifically focusing on transboundary movements.