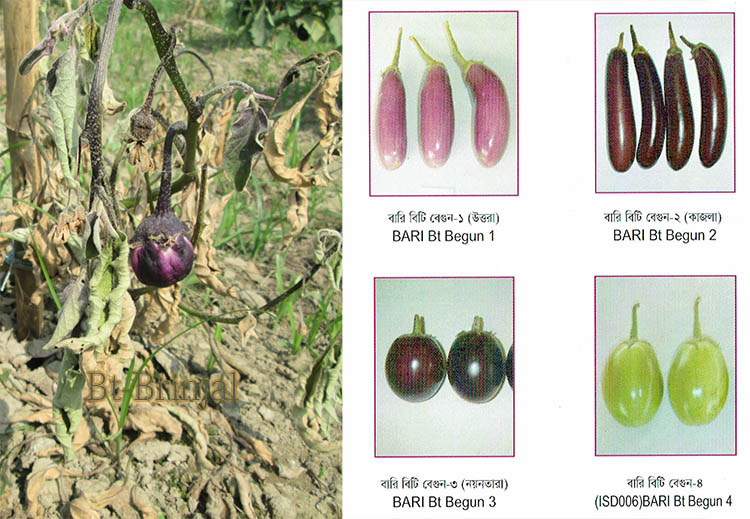 Brinjals, locally called Begun (in Bangla) by the people of Bangladesh, are the most common and favourite vegetable. On 17 May, 2020 the New Age, a national daily of Bangladesh published an article of mine [Akhter, 2020] titled “Aubergine Story: Local varieties exists, not GMOs”. In the article, I argued that in the month of Ramadan (month long fasting of the Muslim communities), the demand for brinjal (eggplant/aubergine) is the highest, because it is the main component of the most popular Iftar item, the Beguni. From the rich to the poor, Iftar is incomplete without chola-peyaju-beguni on the plate. In the market, local varieties of brinjals were amply seen, but not Bt brinjal, although claimed by the promoters that smallholder farmers have rapidly adopted the crop, from just 20 in 2014 to more than 27,000 in 2019 across all districts of Bangladesh [Conrow, 2019].

The article referred to a UBINIG quick survey over telephone in April-May 2020, with farmers in eight districts and consumers in Dhaka to investigate how farmers were faring during the COVID-19 Lockdown period with the marketing of brinjals. These were sold for prices ranging from Tk 35 to Tk 80 a kilogram on the market. In early May, at least 26 different local varieties with beautiful names, specific to their agro-ecological locations, were found on the market. For example, in Noagaon the varieties are Alta Bulbuli, Lodha Begun, Ghia Begun, Kanai Begun, Shoila Begun, Ramchandrapuri, Jhumka etc.; in Jessore, local varieties such as Makra, Bhangor, Baropata and Kata Begun are found and fetched good price. The price varied according to varieties as each is valued not only by the supply and demand matrix but more for taste and local culinary culture. Shingnath brinjal is sold for prices of Tk 40–50 a kilogram, Chakra, Lafa and Kata begun sell for Tk 50–100 a kilogram. Few HYV varieties known as Jessori and IRRI begun were found in Jessore and Kushtia and two hybrid varieties (China-3 and Ired) were found in Kushtia and Natore. The prices of HYV brinjals were between Tk 25 - 50, and that of hybrid was Tk 45–55 per kilogram. Commercial farmers grow the HYV varieties on a large scale while the small farming households grow local varieties on a smaller scale in their small pieces of land. Interestingly, they are readily available on the market and have a good demand. Local varieties fared much better than the HYV and hybrid varieties.

Bt brinjal seeds (Bt brinjal 1, 2, 3 and 4) for the winter season were given to farmers in different areas during the period December 2019 to January, 2020. If the claim of International Food Policy Research Institute (IFPRI) and the ministry of agriculture is true that 27,000 smallholding farmers were cultivating Bt brinjal across all districts of the country, then it is reasonable to expect that the new genetically modified crop would have grown enough in quantity to be visible in the market. The markets in eight districts and in Dhaka showed no presence of any Bt brinjal in late April–early May 2020. None of sellers in the market could identify any Bt brinjal in their stock. None of the buyers interviewed in Dhaka market could identify any aubergine, which would be a GMO.

Could it be that those were in the market without any label? In that case, it is a clear case of violation of approval conditions of Bt brinjal in the country. We know that in October 2013, the National Committee on Biosafety (NCB) imposed seven conditions to be followed in field cultivation of the four Bt brinjals (1,2,3 & 4) One of these conditions was labeling — if Bt brinjal is brought to the market, it must be labeled, i.e., it should be clearly stated that it is GMO. But the Director General of BARI, Dr. Rafiqul Islam Mondol only agreed to label the sacks as ‘poison-free GM brinjal’ [Akhter, 2016], which was also not followed.

Culturally, farmers have the tradition of naming the brinjals they grow with beautiful local names such as Hingla begun, Batka begun, Tal-begun, Kalo-khato begun, Laoitta begun, Sailla begun, Ghritakanchan begun, Nayantara and many others. Brinjal (Solanum melongena L.), also known as aubergine or eggplant) is one of the most common and important vegetables. It is an important solanaceous crop of sub tropics and tropics. In this rich diversiy of brinjals, Bt brinjal is now a ‘bejat’ name in the list of hundreds of diverse varieties of aubergine in the country, because these are numbered like prisoners and are called Bt brinjal 1, 2, 3 and 4. The word ‘bejat’ expresses the displacement in the order of crop varieties implicating potential harm to agriculture, food system and culture. In ‘bejat’, the original names of source materials have disappeared. Local names of brinjals are always related to specific agro-ecological conditions where a variety could express their natural genetic trait. But Bt brinjal seeds are given to different geographical locations, assuming a homogenous agro-ecological environment, where they do not belong, are now hard to decide where they belong except in the gene-manipulating laboratories. Farmers cannot feel or determine any agro-ecological, culinary or cultural connections to laboratory varieties, such as, for growing these brinjals. Therefore, farmers who received the Bt brinjal seeds, and not being told the real name of the introduced Bt brinjal, called genetically engineered varieties as “Sarkrari Begun” or the “government brinjal”.

The genetically modified Bt brinjal has been developed by inserting a gene cry1Ac from a soil bacterium called Bacillus thuringiensis through an Agrobacterium-mediated gene transfer. Four Bt brinjals are distributed to farmers for field cultivation. The original names of the varieties that had been selected for transgenic manipulation are Uttara (Bt brinjal-1), Kajla (Bt brinjal 2), Nayantara (Bt brinjal 3) and ISD-006 (bt brinjal 4). These are some of the most popular commercial varieties as well and they are also grown as non-Bt varieties. There are elements of deception in Bt brinjal field trial in selecting the most popular varieties; if farmers accept any transgenic variety, it could be claimed that genetic manipulation is a commercial success. But farmers varieties, selected over hundreds of years, are already successful and proof of the brilliance of the farmer’s knowledge. Genetic manipulation is merely a trick for appropriation of farmer’s knowledge.

Bangladesh has been a target country for the Bt brinjal under the Agricultural Biotechnology Support Project II (ABSP II). The introgressions of Bt gene into 9 Bangladeshi local variety brinjals were done at MAHYCO, (Maharashtra Hybrid Seed Company) the Indian company, using their lab facility. MAHYCO has received the application rights of the Bt cry1Ac gene technology from US company Monsanto which has a 26 per cent stake in Mahyco-Monsanto Biotech (MMB). The Bangladeshi varieties were backcrossed at MAHYCO with transgenic brinjal containing Cry1AC. This means that there was hardly any scope for knowledge and technology transfer from MAHYCO’s proprietary technology to the scientists working in public research institutions of Bangladesh. The Bt brinjal is actually a piracy of the local variety brinjals to be genetically modified for patenting by Monsanto-Mahyco partnership.

On 25 May, 2020 Frontiers in Bioengineering and Biotechnology published an article based on 2019 study on Bt brinjal claiming that 83.1% of Bt brinjal growers were satisfied with the yields obtained, and 80.6% were satisfied with the quality of fruit, while 58.7% non-Bt brinjal growers were satisfied with their yields and 28% indicated that a large portion of their fruit was infested. Among the non-Bt brinjal growers, 39.6% had not heard of Bt brinjal [Shelton, et. Al 2020]. Another article was published on 28 May, 2020 in the CornellCALS, by Joan Conrow which referred to the same article published on May 25, 2020 in the Frontiers making a conclusive statement that “farmers in Bangladesh achieved significantly higher yields and revenues by growing insect-resistant, genetically engineered eggplant”. However, the article quotes Maricelis Acevedo, Director for the Feed the Future South Asia Eggplant Improvement Partnership, “This study provides more evidence that Bt brinjal is being accepted in the market, but more work is needed to develop new varieties better adapted to local conditions and market preferences ” [Conrow, 2020]. It looks like they do not have updated information on the Bt brinjal farmers’ performances in this year; it was simply a deceptive tactics using previous studies with newer headlines. The question remains, why they are not visible in the market?