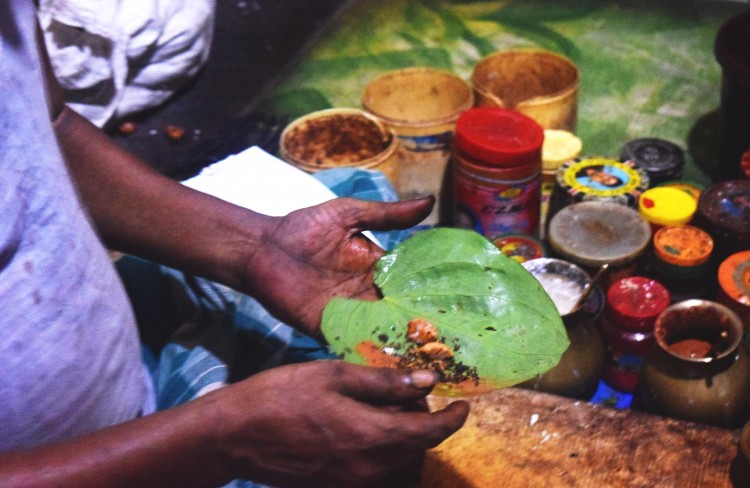 The offer of a paan (betel leaf) with zarda (boiled tobacco) after a heavy meal at a wedding party, or even at a relative's house, is very much appreciated and socially well accepted in our country.

We do not even get concerned when our elders, particularly mothers or grandmothers, chew paan with zarda or shada pata (dried tobacco leaf), multiple times a day.

In Bangladesh, the Smoking and Tobacco Product (usage) Act, 2005, amended in 2013, included these three as the most commonly used smokeless tobacco products.

However, the law is inadequate to control the social and economic complexities involved in the production and use of these smokeless tobacco products.

There is a general lack of knowledge about the extent of use of SLT products; even among those who support tobacco control in general.

Tobacco control usually means 'no smoking' – referring to the use of cigarettes and bidis.

Smokeless tobacco products are consumed by a large majority of poor men and women in rural and urban areas.

The reasons, besides the social and cultural acceptability, are the widespread availability and affordability.

In every corner of streets, tea shops, vendors, and groceries carry these products without any restrictions, even violating the law by selling them to minors.

The price is as low as Tk5 per pack, a paan with zarda can be bought anytime at only Tk5.

The zarda is made attractive by adding ingredients like natural and synthetic flavours, aromatic and perfumed spices, menthol, glycerine, molasses, and saccharine to tobacco flakes.

These added ingredients, levels of nicotine, and other toxic components vary widely among the various types of SLT products and they often pose a health risk.

The tobacco leaf used for smokeless tobacco is Motihari – Nicotiana Rustica; and for the cigarettes it is Flue Cured Virginia (FCV) – Nicotiana Tabacum.

Motihari is a native variety and has a high nicotine content.

The manufacturing factories of zarda and gul are characterised as the informal sector.

Around 435 zarda and gul manufacturers were found all over the country according to field studies by Ubinig and Dhaka International University (DIU).

All these manufacturers cannot always be traced as they do not provide the appropriate factory addresses or they frequently change locations.

It is easier to shift from one place to the other as the factories in most cases do not have any physical set-up; it is part of the factory owner's house, which also exposes the residents to tobacco dust.

In 2020, amid the Covid-19 pandemic, many zarda and gul factories were closed down while new ones were set up.

There are many brands with fancy and attractive names. Some of them, like Hakimpuri, Shobha, and Ratan, are very common all over Bangladesh.

The manufacturers of SLT use the smart tactics of producing the packs in different sizes and weights.

In a study by Ubinig, 371 zarda brands were found in 45 sizes and 16 different weights.

The most common weight of zarda and gul is 10 grams and shada pata is sold in loose form.

Undoubtedly, these facilitate affordability and availability for the consumers.

Despite the compliance requirements for factory products, including the tobacco control law, necessary information such as MRP, address, Graphical Health Warning (GHW), weight, price, production and expiry date etc are not provided in many cases on the packets or containers.

The tiny containers with tiny prints make it even more difficult to comply with the laws.

The consumption of zarda, shada pata, gul and other smokeless tobacco cause health hazards to their users.

The World Health Organization (WHO) recognises smokeless tobacco-related health hazards such as cancer of the oral cavity, oesophagus, and pancreas.

In case of female users of reproductive age, consuming these products may affect their unborn babies, including stillbirth, pre-term birth, and low birth-weight.

In Bangladesh, obstetricians and gynecologists have expressed concerns over such impacts on pregnant women.

Despite the wide use of the harmful smokeless tobacco, its control received much less policy attention than it should have.

The FCTC is the first evidence-based treaty that reaffirms the right of all people to the highest standard of health.

Bangladesh is quite ahead of many countries in enacting the Tobacco Control Law in 2005 immediately after signing and ratifying the FCTC.

But unfortunately, during the negotiations of the FCTC between 1999 and 2003, some WHO member states opposed including SLT in the framework convention.

It was argued that the body of evidence was insufficient for concerted global action against its use. At most, it could be a regional concern in Asia to be addressed by a regional policy.

However, the harms associated with SLT use was acknowledged by the majority, and finally, SLT was on the agenda at the sixth Conference of the Parties (COP6) of FCTC held in Moscow in 2014 after a comprehensive report presented by WHO.

It was acknowledged that "SLT use has received less attention than cigarette use by the global public health community because it has been perceived to impose a smaller burden on human health and was previously mainly confined to a few South Asian countries, some Nordic countries, and the United States of America. However, the problem of SLT use is no longer a local or regional problem but a major global one affecting a large percentage of the world's population".

This region carries the highest burden of oral cancer - at over 95,000 oral cancer cases - caused by smokeless tobacco, each year.

However, as mentioned earlier, three common smokeless tobacco products were included in the definition of tobacco products in the amendment of the Smoking and Tobacco Product (usage) Act made in 2013.

This was possible because of the movement by the Anti-tobacco women alliance, also known as 'Tabinaj' (Tamak birodhi nari jote).

The support for such actions was also made possible by global tobacco control groups such as the 'Campaign for tobacco-free kids'.

Women's alliances against tobacco were also formed globally in Europe, North America, Africa, Australia and other continents, but all these are focused on smoking, as the tobacco industry has targeted women, and women are victims of passive smoking.

Though Bangladesh is ahead of many countries in its awareness and actions against smokeless tobacco, these measures are still not enough to have an impact on the reduction of the products' use.

The manufacturers can bypass the laws and they also do not pay taxes to the National Board of Revenue (NBR).

The law needs to be amended again to make regulations stricter for standardised packaging and graphic health warnings.

Let us make our life free from the toxic effects of tobacco. One can always enjoy the paan without zarda or shada pata.