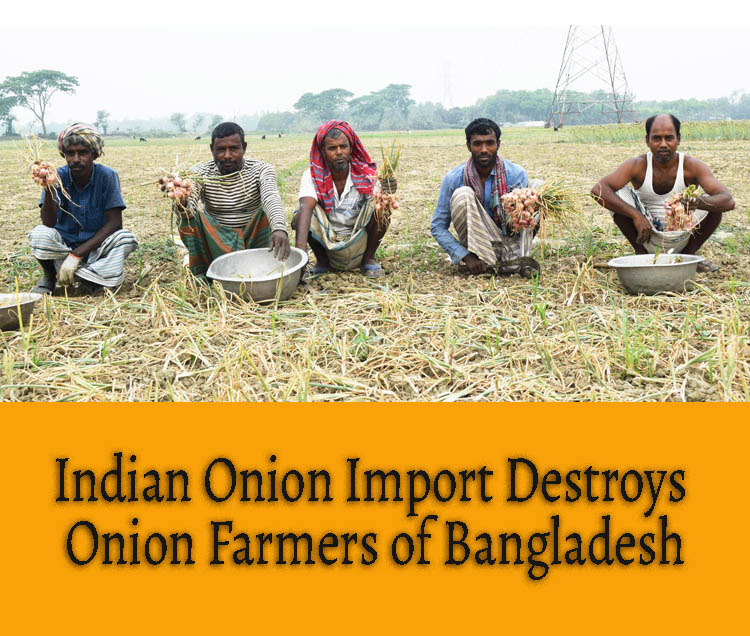 It seems, to stabilise the price of onions in the retail market, we have to pray to God for the stable weather condition in India. But it is not only natural disasters, but also trade restrictions of the Indian government as well

Onion is not only a matter of commerce, it is about agricultural production linked to the economic survival of the small-scale farmers. Photo: UBINIG.

"Onion prices have shot up due to the heavy downpours in Bangalore, India. Traders of the neighbouring countries are also responsible for this" - this is what Commerce Secretary Tapan Kanti Ghosh said on 10 October 2021.

Like every year, during September-October, the price of onions went up. The price of locally produced onions (during the first week of October 2021) was Tk60-70 per kilogram (kg), which was Tk45-55 a kg three days before.

This trend of rising onion prices and crossing the limits of the consumers' purchasing power has been ongoing for the past few years. Yet, no sustainable solution has been given either by the Ministry of Agriculture or the Ministry of Commerce.

The latter is only concerned with meeting the demand through domestic production (80 percent) and filling the gap with imports, the rest 20 percent. The Ministry of Agriculture has much more responsibility, as it can solve the problem of domestic production and also look after the interests of the farmers growing these onions.

It seems, according to the statement of the Commerce Secretary, to stabilise the price of onions in the retail market, we have to pray to God for the stable weather condition in India. The natural disasters in India are wreaking havoc on our onion market price, which is affecting the consumers. But it is not only natural disasters, but also decisions about trade restrictions of the Indian government as well. 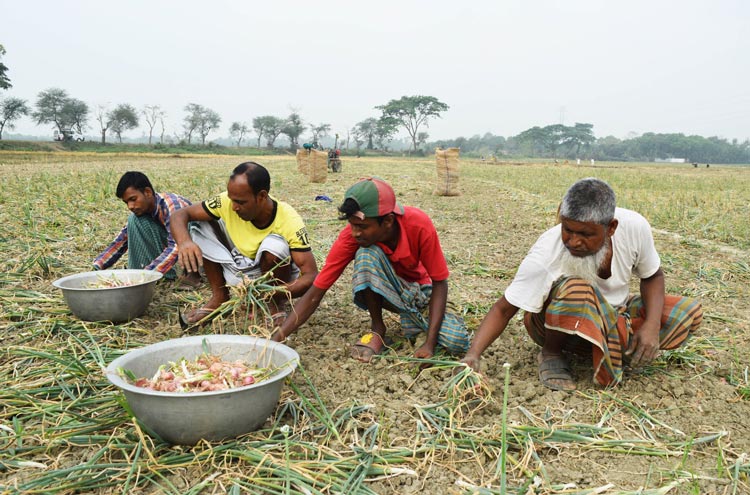 In mid-September 2019, onion prices jumped after India's restriction on onion export. Onion prices rose from Tk 40–50 per kg to Tk110-115 per kg in the retail markets, amounting to a 175 per cent increase per kg. The same thing was repeated in 2020, despite the fact the Bangladeshi officials in the meeting of the commerce secretaries of the two countries requested India not to impose export restrictions.

During her visit to India in October 2019, Prime Minister Sheikh Hasina raised the issue in the India-Bangladesh Business Forum on October 4th, 2019, and requested an alert in advance so that Bangladesh could source from other countries. Still, the State Minister for Foreign Affairs M. Shahriar Alam had to write to the Indian High Commission about the abrupt decision of the export ban undermining the discussions between Bangladesh and India that took place in 2019 and 2020.

There might be very good reasons for India to impose trade restrictions, but India being the major exporter of onions to Bangladesh, comprising 80 percent of the onion imports into the country, such decisions have significant impacts on the prices of this essential spice.

The question is why we cannot meet the shortage of 20 percent onion production in the country itself.

The farmers need help to store onions for a longer period. It is perishable and quickly degraded. The farmers do not have a proper facility for storing onions.

This year, the domestic onion sector had a bumper production, through an intensive onion farming programme in five districts of Rangpur, which means the country does not need to be import-dependent.

Unfortunately, there seems to be little coordination of decisions taken by the Ministry of Agriculture and the Ministry of Commerce. While the former is trying to increase domestic production, the latter is making imports easier by taking measures such as withdrawing the 5 percent duty on onion imports.

There are local varieties such as Taherpuri; and the Spices Research Centre (SRC) of Bangladesh Agricultural Research Institute (BARI), Joydebpur, Gazipur has developed seven high yielding cultivars in Bangladesh.

Instead of using the production capacity of the country, the deficit is met through imports, which usually are more than the deficit, creating an oversupply in the market. It is not unlikely that there is a vested interest among the importers who can play games with rising prices that hits consumers across the social classes hard.

While the middle class and rich people use onions for different purposes, for the poor, it is the only spice for cooking vegetables, dal, etc., or can even be the curry with green chilis and rice. A price rise in onions affects the poor most. So the imports may help the price go down and make the consumers happy.

But are the onion growers happy with the imports?

Let us look at one of the onion hubs of the country, Sathia and Sujanagar Upazilas in Pabna - where over 120,000 small-scale farmers are producing a local variety called Taherpuri onion. For these farmers, onion is the main crop followed by jute. The yearly family needs, food, education, healthcare of the family are met from the income from these two crops.

Do we know what happens to these small-scale farmers when the onion is imported? In a field study by UBINIG (Policy Research for Development Alternative), it was found that the farmers in the villages are well aware of the onion imports, which they call LC (Letter of Credit) onions.

They never saw these LC onions in their local market, however, they know when LC imports are in the market with lower prices because they find it hard to sell their onions. The import of onion comes as a death blow to the local onion growers, especially if the imports are made at the harvesting time in April-May and the wholesale traders do not buy the local onions.

In contrast, the traders come to their houses when there is no import. Even the van drivers, who carry farmers' onions from the village to the market, can figure out that there has been onion import because of low purchase by the traders.

Farmers are discouraged to grow onions in the next season if the price is low after harvest. The area of onion cultivation comes down by 25 percent, thereby leading to further deficit, a chain effect leading to more imports.

Farmers are not against the import of onions if it is based on need, but they expressed concern against imports which creates unequal competition and lowers the domestic price by creating an artificial surplus.

Imported onion varieties are bigger and are cheaper than the local onions. Local onions are smaller but have a stronger pungent aroma and add better taste to food and require less in amount. Consumers like the local onions also because these can be stored for a longer time.

The government should come up with incentives for the local onion farmers and ensure better prices so that both farmers and consumers gain. The increased production should be reflected in a reduction in imports and a reduction in retail price.

According to the traders in Kawran Bazar wholesale market in Dhaka, consumers prefer the local variety of onions even at a higher price. The low-income consumers buy the cheaper Indian onions, but do not like them very much. These onions are purchased mostly by hotels, restaurants, and other commercial users. 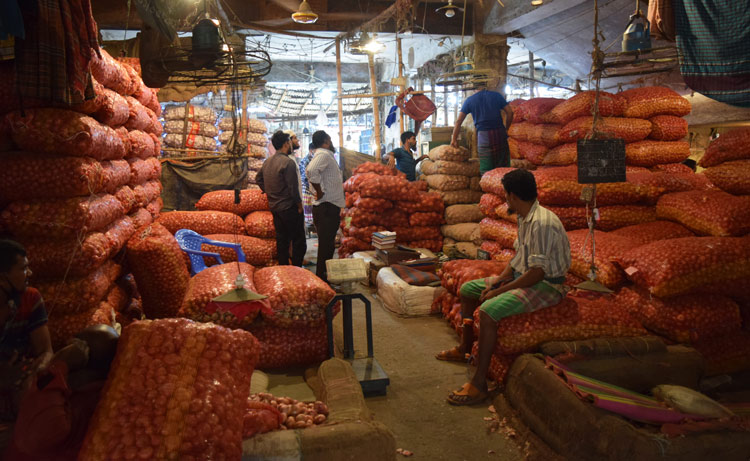 The Department of Agricultural Extension officials opined that onion cultivation is remunerative. But the farmers need help to store onions for a longer period. It is perishable and quickly degraded. The farmers do not have a proper facility for storing onions.

There is no storage facility at the government level like that for potatoes. And if the onion is imported at the time of local onion harvest, the market price of onion goes down abruptly. The farmers cannot make any profit.

The government must come forward with a coordinated plan. Onion is not only a matter of commerce, it is about agricultural production linked to the economic survival of the small-scale farmers.

Apart from economics, onion is integral to the culinary culture of Bangladeshi people. So the Ministry of Agriculture must be consulted before import decisions are made and while the government must ensure the supply of onions in the markets for the consumers, it is also their responsibility to make the onion farmers earn enough income to sustain production.

( Originally published as 'Why can’t we produce more onions and avoid imports?' in The Business Standard (TBS) on 25 October 2021.)