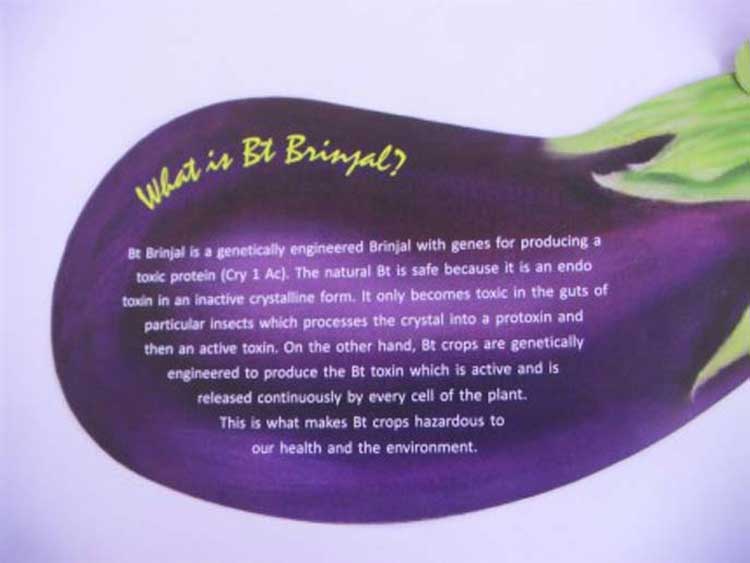 On 30th September, 2010 BBC Radio (Bangla) interviewed Mohammad Abdul Mannan, Director General of BRRI in which he said that BRRI is going to introduce genetically engineered rice or GM rice. He was asked whether BRRI is doing the study on health safety issues of GM rice, for which he did not answer in a proper way. In fact, we are not sure if BRRI research protocol has such provision and whether they have the capacity to carry out research on health and environmental safety aspects of GM crops. But that does not stop BRRI from introducing the GM rice in Bangladesh, because the International Rice Research Institute and the biotech industry, are behind this project and are using BRRI facilities including their scientists to introduce the controversial GM rice crops in Bangladesh. The Director General said that the institution was getting support from Rockefeller Foundation and Bill & Melinda Gates Foundation for this research.

Few months back, on 14th July, 2010 the International Rice Research Institute (IRRI) has celebrated its 50 years in Bangladesh in a big programme inaugurated by Sheikh Hasina, Prime Minister of Government of Peoples Republic of Bangladesh and with the presence of Director General Robert Zeigler of IRRI. Compared to this, BRRI’s celebration of forty years was given much less importance, it seems. Even the Minister for Agriculture, Begum Matia Chowdhury was not present. The newspapers had news published from the Press Release of BRRI. We know that BRRI is nothing but an affiliate institution of the International Rice Research Institution, but it is a national gene bank and part of the National Agricultural Research System (NARS). But unfortunately it is not acting like an independent institution, rather it is controlled by the multinationals institutions and corporations.

Our question is what did the farmers get out of BRRI research on rice? Since its inception in 1970, it has collected 8000 varieties of rice germplasm and is preserving them in the Genebank. In return, BRRI has developed only 57 high-yielding rice verities including four hybrids as was revealed in the seminar held on 1st Oct, 2010 in BRRI, according to the Press Release of BRRI. The other contributions of BRRI are 50 improved technologies on soil, water, fertiliser and cultural practices of rice. Besides, the institute has identified 31 rice diseases and 175 species of pests to combat insects (bdnews24.com). 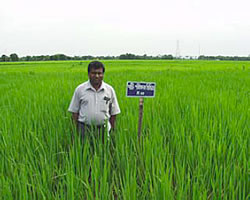 Where is the farmer?

BRRI is working with the scientists, but farmers have hardly any access to BRRI germplasm and also to share their knowledge.

BRRI is a national institute, but its research information is not open to the general public, even to those organisations who are working with farmers. How do the farmers know how to get support from BRRI? How to have farmers’ access to the germ plasm collected by BRRI? It is only when they release a certain rice variety and then the Agricultural extension personnel promote the new variety to the farmers, then the farmers get involved. Farmers have no participation in the development of the variety, although most of the varieties have been developed on the basis of farmers indigenous varieties. Although the farmers of Bangladesh do not have access to the Rice germplasm collection, it is more readily available to the Corporations and to International institutions such Syngenta, Monsanto, Bill & Melinda Gates and of course Rockefeller Foundation. This is a question of sovereignty, because rice is a major food crop of the people of Bangladesh. Any threat to rice will make the people vulnerable, and the country will become food insecure.

In this regard, it is relevant to quote former US President George W Bush. He said, It’s important for our nation to build - to grow foodstuffs, to feed our people. Can you imagine a country that was unable to grow enough food to feed the people? It would be a nation subject to international pressure. It would be a nation at risk. And so when we’re talking about American agriculture, we’re really talking about a national security issue. - remarks to the Future Farmers of America Washington, DC, 27 July 2001; quoted in Food Sovereignty in the era of trade liberalization: Are multilateral means toward food sovereignty feasible? by Steve Suppan GSC Quarterly 9 (Summer 2003).

Agriculture is a national security issue, but we are letting our germ plasm of our major staple food crop, rice, to the foreign organizations without even disclosing the facts to the general public.

It goes without saying that Bangladesh being a major rice producing country and rice production being the source of livelihood, employment, economic activities and for various cultural and social reasons, any attempt to “engineer” rice without full and authentic research about safety, impact on local varieties and farmers’ livelihood, would be disastrous.

It goes without saying that BRRI introduction of rice varieties over last 40 years have not been so successful. The HYV varieties developed by BRRI are called modern varieties, which are modern only because they are chemical based, i.e. using chemical fertilizers, pesticides, extracting ground water for irrigation, power tillers for ploughing, using rice mills for husking etc. Thus, replacing most of the peoples’ livelihood. It started with so-called high yielding variety of rice BR-8, then hybrid varieties and now trying to promote genetically engineered rice varieties. BRRI could not yet prove that each and every variety that BRRI promoted were useful to farmers. Only few varieties which farmers could use more are BR-28 and BR-29. On the other hand, cultivation of HYV rice varieties has increased the use of chemical fertilizers and pesticides. As a result the soil fertility is reducing. In a recent study by Soil Research and Development Institute, about 40 per cent of the country’s land area has become deficient in organic elements and other soil nutrients over a decade. Farmers these days need to use more fertiliser to produce crops as the land is losing fertility because of deficiency in organic elements. (New Age, October 1, 2010). The report published in the daily New Age Organic matter deficiency erodes farmland fertility by Faisal Rahman shows that the local variety rice needs less fertilizer input than the HYV of BRRI. According to the report, farmer Matiur, 65, grows Shail rice, an indigenous variety, between the months of Asharh and Kartik (June – October) and BR-29 between Paush and Baishakh (December – April). The farmer said, ‘I need to use about 80 kilograms of urea, 20 kilograms of TSP and 40 kilograms of other fertilisers on a bigha to grow BR-29’, and also said that “Shail rice takes almost half the quantity of fertilisers than what is required to grow BR-29”. There are thousands of examples like this throughout the country. Farmers who are being forced to use more and more fertilizers, become indebted to meet the increasing cash cost of production. There are also examples that the HYV varieties could not sustain when there is prolonged flood and other natural disasters.

With the support of multilateral donor agencies such as the World Bank, BRRI varieties have received extensive support and therefore could cover 52 percent of the rice area of the country. Rice has become a monocrop and has taken over the land used for production of lentils, pulses cultivated during the winter season.

The farmers in Bangladesh did not benefit from cultivating the socalled HYV varieties. According to a study ‘livelihoods of the rickshaw pullers of Dhaka city’ conducted by Good Earth, a non-governmental research organisation, under the supervision of the Social Science Research Council of the Planning Ministry, ‘more than 71 per cent of the city’s nearly one million rickshaw-pullers were farmers and poverty forced them to migrate to the capital for earning livelihood’ (New Age, October 22, 2009, quoting BSS). This means the marginal and small farmers did not benefit from the modern agriculture and therefore had to migrate.

The experiences of hybrid rice varieties have not been good either. But do all these failures justify the introduction of genetically engineered rice? The answer is definitely NO. We are concerned that the research on GE rice is done in a non-transparent way. We have enough experience of failures of the so-called scientist-led varieties in the past. Let’s not play with our future of agriculture in this manner. Let BRRI try to find out the varieties which are good under salinity condition, flood situations and drought situation. In the collection of 8000 varieties of rice germplasm, there are many varieties which the farmers can grow.

We expect BRRI, as a national institution to be farmer-friendly and not be controlled by corporations.