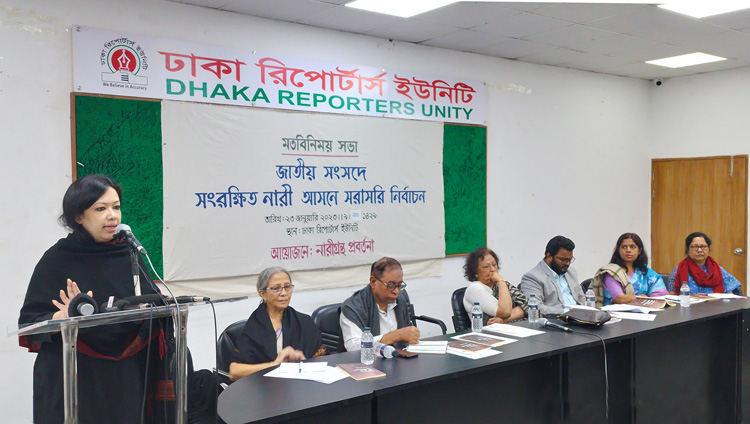 The meeting was held on January 23, 2023 at Dhaka Reporters Unity, Shegunbagicha for exchanging views on the reserved seats for women in the parliament. Among other participants, ex-member of Parliament Barrister Rumin Farhana, renowned political analyst Professor Dilara Chowdhury, political leader and activist Saiful Haque of Biplobi Workers Party and Senior co-convener of Gono Odhikar Parishad Faruk Hasan from Gonotontro Moncho, and Jahanara Khatun from Naripokkho spoke in the meeting. Farida Akhter, Chairperson of Narigrantha Prabartana was the head of the meeting. The meeting was conducted by Shima Das Shimu, co-chairperson of Narigrantha Prabartana. The meeting was attended by over hundred people from a cross-section of organizations including women’s organizations, garment workers organizations, sramik federation, women writers and poets, teachers, NGO, physicians, and members of various political parties and journalists. It was intended to be a sharing of views among major political parties like Bangladesh Awami League, Bangladesh Nationalist Party (BNP) and others. Opu Ukil, Ex-Parliament member of Bangladesh Awami League was invited; unfortunately she could not come.

In the statement presented by Narigrantha Prabartana, it said that different political parties are voicing various demands with regard to the upcoming national parliament election that is going to be held at the beginning of 2024. However, there is absolute silence on 50 reserved seats for women in the parliament which are nominated by the elected general members proportionately from the political parties that participate in the parliament. The method of nominating members for these seats has been determined by article 65 (3) of the constitution. The number of these seats and the tenure of these seats have been increased several times since 1972 and now the number of these seats stands at 50 and the tenure has been extended to 25 years from the 11th Parliament. However, the method of election of these members has not changed over the years, remained to be indirectly elected. Nari Andolon, the women’s movement has been demanding direct election for these seats since 1987 because it has been evident by that time that even though it is necessary to preserve seats for women in the parliament, however, if that is done through selection or nomination, that is tantamount to humiliation for the women. It has been seen in the past that those who are nominated through this process fail to serve peoples’ interests, particularly those of women. They have no accountability to any constituency except their own party leaders. 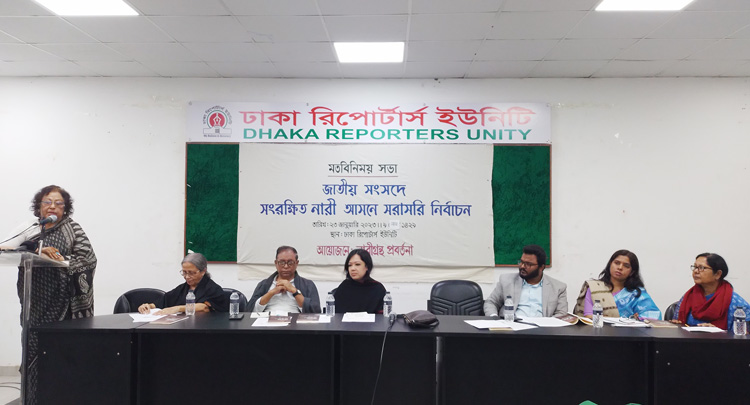 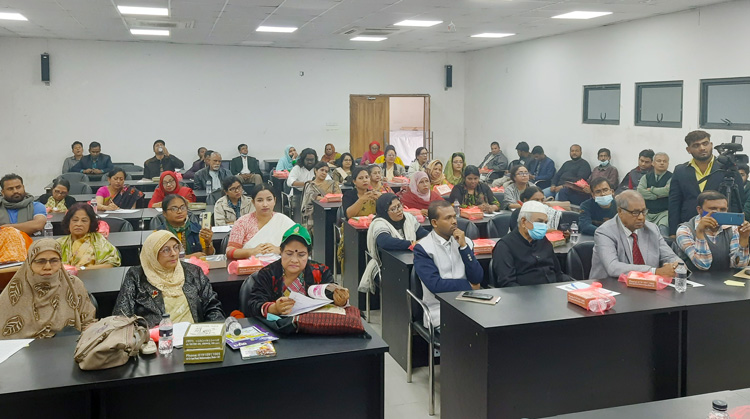 Nari Andolon has been demanding direct election for these reserved seats all along in all the national elections that have been held so far since 1991. But till now, women are nominated for these seats by the general members of the parliament from their respective political parties where the qualification of the nominated members is often overlooked, and thus the women constituencies of the country are being deprived of their legitimate right of electing their representatives in the parliament.

Various political parties and coalitions are actively working towards restoring the democratic atmosphere in the country. Demands for political reform and constitutional reform are being voiced by various political organizations. Even the demand of writing the constitution from the scratch has also been raised. But it is a matter of regret that none of the mainstream political parties, progressive political parties, or coalitions has uttered a single word against the undemocratic and patriarchal system of nominating members for the women-reserved seats of the parliament. We agree to the demands of restoring the rights of the voters and holding free, fair, and credible elections that are often voiced by different political parties. But we are frustrated seeing that none has said anything regarding the process of selecting candidates in 50 reserved seats for women in the parliament.

So, our demands are:

a) Women have to be elected for the reserved seats through direct election. For this, the necessary amendment has to be brought to article 65 (3) of the constitution. Since the ruling Awami League government has an absolute majority in the national parliament, they can easily make necessary amendments to the constitution regarding this matter before the upcoming twelfth national parliament election in 2024. We hope that other political parties outside of the parliament will also agree to this demand and support this initiative if taken.

b) The number of reserved seats for women has to be increased to 64 and should be made district-based. However, some women’s organizations have demanded this number to be one-third of the total number of 300 seats, i.e. 100. We do not differ from such demand either.

3. Political leader and activist Saiful Haque from Biplobi Workers’ Party said that women constituencies are deprived of their rights mostly for not having women representatives in the parliament who have been elected through direct election. To change this scenario, nomination for women candidates should be made compulsory in 15%-20% of the general seats of the parliament.

4. Faruk Hasan, senior co-convener of Gono Adhikar Parishad, opined in favor of direct election for the reserved seats for women in the parliament.

5. Jahanara Khatun, member of Naripokkho, said that women tend to be more sensitive to the problems of women, people, as well as society. That is why women candidates should be elected through direct election to ensure active participation of women in the national parliament.

6. Readymade Garment workers Rozina Akhter Sumi said if the Garment owners can be in the parliament then why not the workers? She said direct election in the reserve seats will let the different sectors be represented in the parliament.

Most of the opinion was that the reserve seats are against the political empowerment and dignity of women. So gradually these seats should be abolished in the future by gradually decreasing their number. But if those seats exist, then those must be directly elected.

The most important demand is that there must be a congenial atmosphere for women to participate in the general seats of the parliament. So the political parties must nominate women candidates for the general seats. It should be a minimum of 10% to 33% of the seats.

The political parties must follow the Representation of the People Order, 1972 to fix the goal of reserving at least 33% of all committee positions for women including the central committee and successively achieving this goal by the year 2020. This has not been followed so far. But it is an essential step forward for political representation of women. 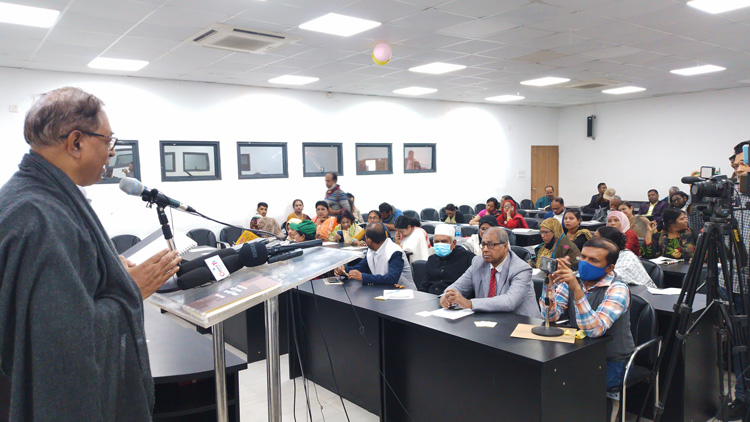 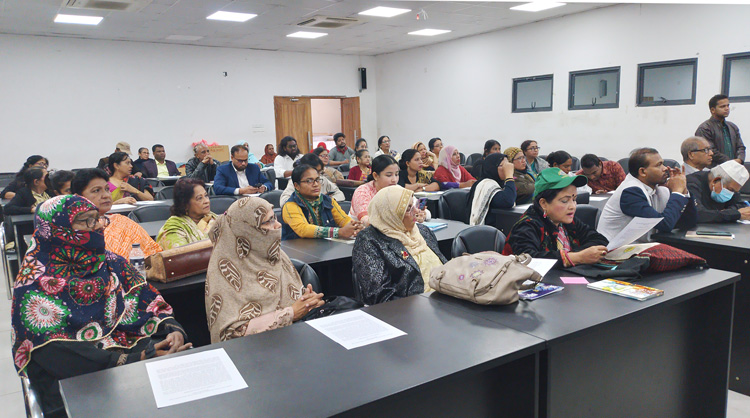 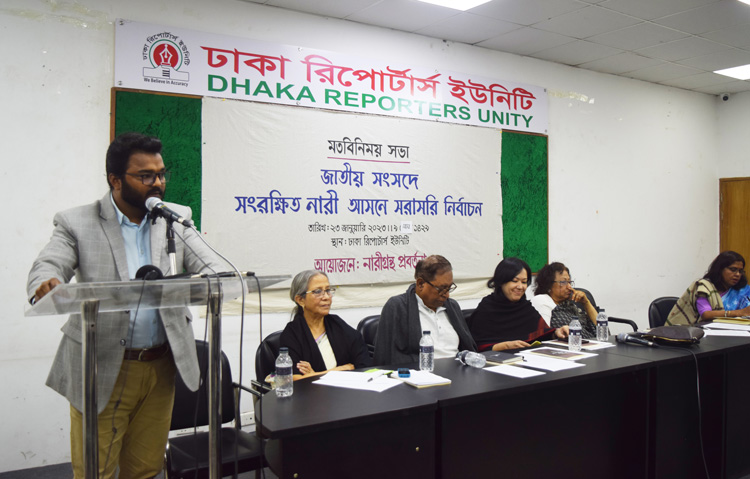 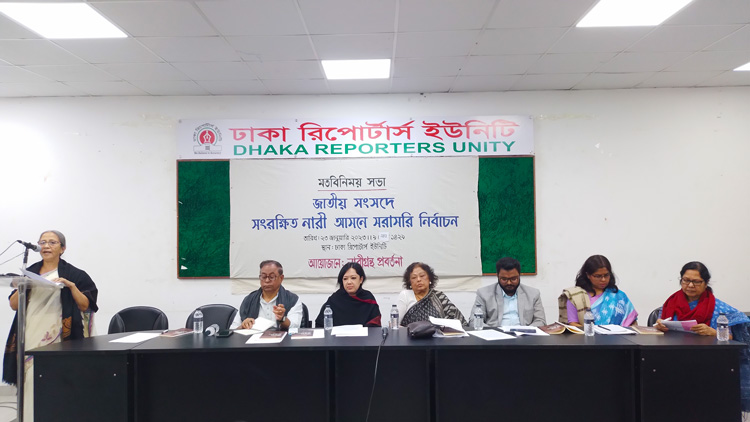 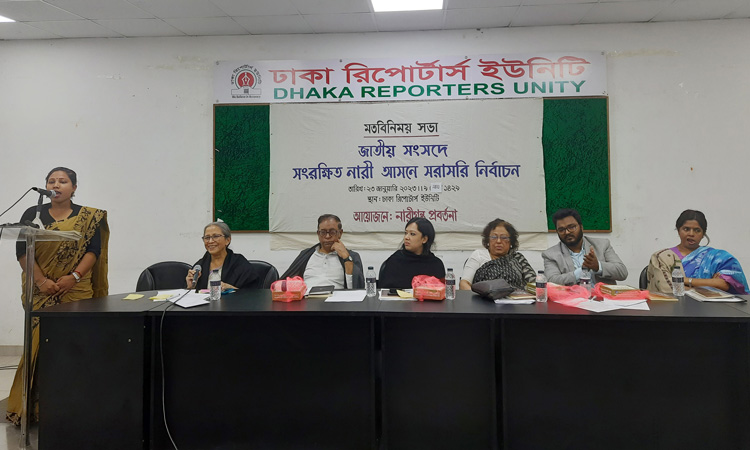