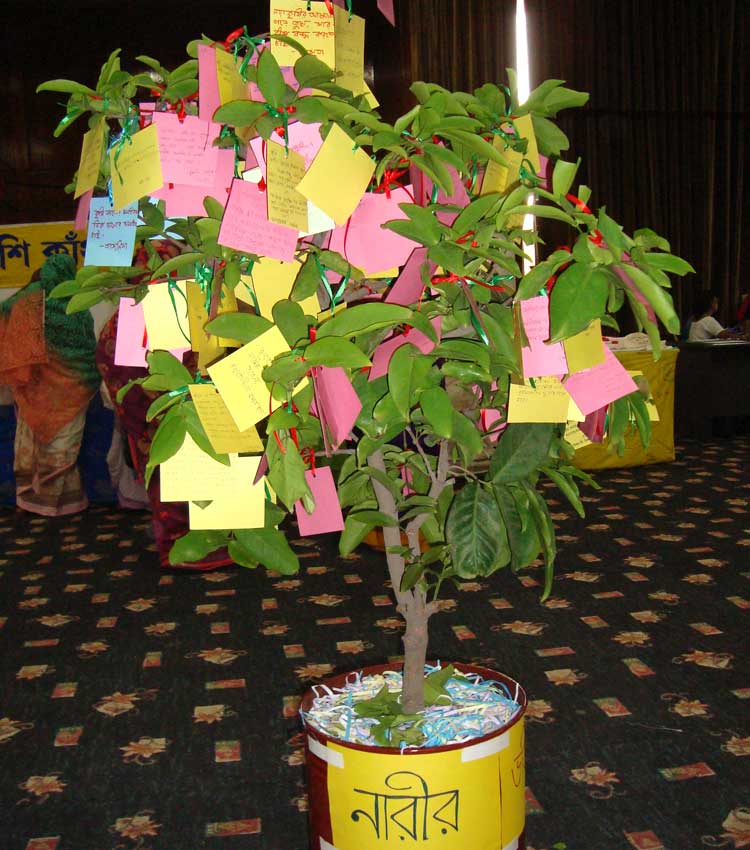 Women's Conference and Festival 2012 was organized in the context of developing a perspective about future that women want. JAMRUL, or the Rose Apple (Syzygium samarangense)) Tree - a very sweet juicy fruit tree, favorite to women, came out as the symbol to depict the desires of women for their future they dream for all.

Women are concerned about establishing their rights as human being but are equally concerned about the loss of biodiversity, environmental degradation and the development perspectives that are genuinely address women’s needs.

Over 176 women representing different women’s organizations, farmers, weavers, potters, indigenous women, writers and poets, and crafts persons from 47 districts joined together in a conference jointly organized by Narigrantha Prabartana and Tabinaj (Women’s Alliance against Tobacco) on 24th March, 2012 held in Local government Engineering building, Dhaka. The event was organized by Narigrantha Prabartana and Tamak Birodhi Nari Jote (Tabinaj). It was a day-long conference with lots of enthusiasm and festive mood.

As women, our perception in terms of society, economy, politics, culture, religion; in fact, in every aspect is different from the men. Obviously, this is due to differences of social and cultural experiences that men and women go through. The present development paradigm does not take into account the surrounding life and environment which are indivisible from women. In the name of development, there is a tendency of subjugating the environment. The consequence is obvious obliteration of the existing set of environment. Thus the life and livelihood of people are now threatened. There are many things which are now appearing as major hazards. In this conference women particularly noted tobacco as appearing to be a major cause of concern because of health hazards, environmental destruction, and food insecurity. It is posing a threat to our future generations. This issue has been ignored in the women’s movement but is coming back as the future perspectives of women are discussed with priority for life and environment and development initiatives of the people. The women’s conference is therefore jointly organized by with Narigrantha (the women’s resource centre) and Tabinaj (the anti-tobacco alliance of women) to bring together women’s organizations from different districts, the members of Tabinaj and women representing cross section of the society.

Women are against use and cultivation of Tobacco

Women are affected by tobacco; i. as users of tobacco product ii. as second-hand smokers or passive smokers and iii. as workers in the hazardous conditions of tobacco cultivation and processing. The male smokers do not know the scale of harm they have been causing to their family members, particularly to women as their wives and young children.

Smoking scenes are shown in cinema, television and other media which actually act as promotion of smoking, despite the fact that there is law against any form of advertisement.  Smokers and other addicts of tobacco become ‘old’ quickly and die early. The death figure in Bangladesh is about 57,000 per year due to diseases linked with tobacco use has been alarming. Let us not make our short life dark and smoky with the curse of tobacco.

Women are consuming Smokeless tobacco products such as jarda, gul. These are specially found among the poorer working class women such as house maid, day laborers and among the older women. On the other hand, tobacco cultivation has been promoted by the companies and men in the families were allured to the so-called ‘profit’ from the crop. But in course of time it became a losing concern. The farmers are caught in the vicious cycle of the tobacco production and growing debt. There is little peace and happiness in the tobacco growing families. Women are taking initiatives to get out of tobacco cultivation. Women expressed their feelings that with tobacco cultivation they are always under mental pressure, often lose in the final calculation of costs and income, while with food production they are food and nutrition secured for the family members and most importantly they are free from health hazards and are in peaceful mental condition.

Women are deeply concerned that our traditional heritage of seed is threatened due to aggression of multinational seed companies leading to rapid loss of biodiversity and indigenous knowledge on genetic resources. It is alarming to mention that the main cause of hunger and malnutrition in the developing countries including Bangladesh is the industrial food production which started with chemical-based and monoculture of the Green Revolution. Application of pesticides in the crops has caused water pollution. Previously there were varieties of fish in the rice fields in the rainy season. The fish diversity has been destroyed by indiscriminate application of pesticides and herbicides.

Extraction of ground water for irrigation has intensified the concentration of arsenic in water. Arsenic is not only a problem of drinking water but also the major crops raised with such water are also charged with arsenic. It also created social problems for women. We need to fight for ensuring pure water for all. This unjust course of action has obliterated the agricultural biodiversity and soil fertility dragging down to ever-worsening mineral and micronutrient deficiencies in our food.

Agriculture is the main stay of livelihood of the majority of the rural people in Bangladesh. Women play significant role in agricultural activities. However women have little or no right of ownership on land. The right of women as farmers and custodian of seed is also been ignored in the modem agriculture. The multinational companies have been patenting the seeds depriving the farmers right on seed. Hybrids and Genetically modified seeds have been extended at the cost of the indigenous resources. This is done under Government patronization.

Our nature, natural environment and common property regimes are now under threat of privatization. Rivers, canals and other water bodies are being privatized. The public water supply systems are gradually taken up by the companies. In the rural areas, women are responsible for collecting water. Sometimes they have to walk few kilometers to collect drinking water. The water in the rivers is drying up and is further deteriorated due to withdrawal of water by the neighboring country India in the upper riparian areas. Climate change related problems like drought, cyclones, hail storms, floods, river erosion are intensified day by day. Women and children are more vulnerable to these hazards.

Development planning processes did not take into account the livelihood issues of women. The weaver women and particularly women from the indigenous communities said, “we used to weave own clothes with diverse designs and motifs. Now the raw materials of weaving including cotton, dye and other materials have become costly. We can not manage materials for weaving and thus losing our indigenous knowledge of weaving’.

Women in the conference, hanged colorful papers on the Jamrul tree, with what they want for their future.  They are aware of the global actions such as the upcoming UN Conference on Sustainable Development commonly known as the Rio + 20 and the issues that are being raised by the developed nations, which ignores the demands of women. Women’s main demands are to protect and preserve biodiversity and nature. They want to ensure that the local variety seeds are preserved so that the small scale farming households can ensure the food and nutrition to their families as well as the community. Anything that destroys the fertility of soil is not acceptable to women. Anything that destroys the sources of water will not be tolerated. Life and livelihood of women in the cities and rural areas, in the hills and in the remote riverine areas must all be respected and protected.

Violence that is caused to women is rooted in the destruction of the environmental and social surroundings. The connection between how women are seen in the society has a lot to do with these different forms of violence that are going on against women belonging to different castes, classes, ethnicities, nationalities, geographical locations and other varied contexts as well as different social, economic and political formations. So in order to have a world for women which is free from violence needs to be free from poisons in food production, all life forms must be respected and protected and live in harmony with diverse culture and social positions. Women are against aggressive crops such as tobacco, alien trees such as eucalyptus, seeds such as hybrid and GMOs and are against introduction of development policies that destroys the livelihood of rural poor and the indigenous communities.

WOMEN ARE UNITED AND WILL ACT TO PROTECT THEIR RIGHTS AS WELL AS  LIFE, ENVIRONMENT AND LIVELIHOOD