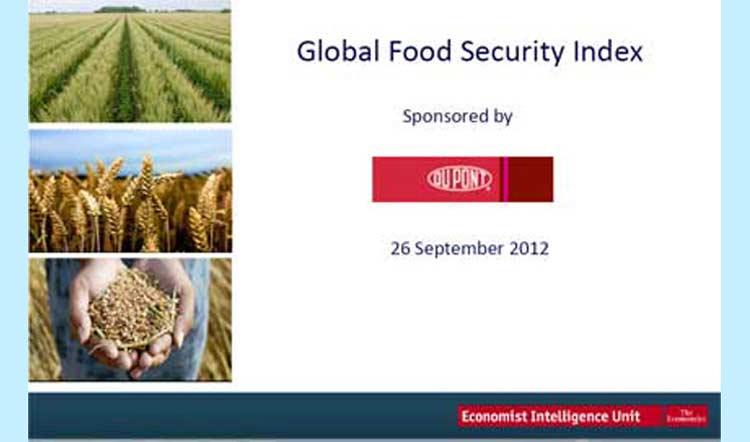 On August 10, 2012 a news item came up on various news media wiith headlines such as 'Bangladesh least food secure S Asian Nation' (Bdnews24.com) which was quite disturbing (also see, 'food security situation poor in Bangladesh'. It said, Bangladesh is the least food-secure among the six South Asian countries according to Global Food Security Index 2012, released by The Economist Intelligence Unit (EIU). [1]

Why should it be disturbing since raising such concerns should rather be appreciated? Isn’t it true that Bangladesh needs to address the issue of food security? The disturbing element is not in the addressing the issue, but how such general concern is used by the transnational companies to induce food production policy to their favour such as industrialization of food production. From chemical and poison based sytem it is now obtaining bio-industrial character to ensure the dominance of biotechnology and genetic engineering. DuPont has commissioned the Global Food Security Index, developed by the Economist Intelligence Unit, measuring the drivers of food security in 109 countries.

The report is an assessment of food affordability, availability and quality of 105 countries around the world. Bangladesh scored only 34.6 on a scale of 100 and was placed 81st among 105 countries. Within South Asian countries, Sri Lanka is the most food secure (ranking 62nd) , followed by India (66th), Pakistan (75th) and Nepal (79th); the position of Bangladesh is definitely very disappointing. However, the report said Bangladesh was doing well in three fields –- ensuring standards of nutrition, agricultural productivity and loans to farmers — in its steps towards food security. A report on the the food security of Bangladesh is also available on DuPont website.

Because of the political sensitivity of this assessment, Bangladesh government has rejected the report on 13th August. The Food Minister Dr. AbdurRazzaque said, "the Economist Intelligence Unit report used old data. Bangladesh has improved a lot in food security since 2009”. The government did not contend the report on any other grounds lacking prudence even to raise question why the EIU has made such a report? To assume that such assessment is innocent concern for the people or the country is unfounded. Government’s insensitivity to issues such as food security is equally disturbing. The issue is not merely of whether data is old or new but notwithstanding other concerns why food security has suddenly become an issue for EIU? Why DuPont is in charge of monitoring such sensitive data?

Dupont, the producer of weapons and killing-chemicals, sponsors Global Food Security Index!  When a country is identified  as food insecure by such index one may fairly take this as an indication that the country became the target for the promotion and commerialisation of unafe and harmful technlogies such and GMOs whih are detrimental to environment, ecology and health of all life forms including human beings.

According to the news, the index was made based on researches on food security, including the FAO's annual State of Food Insecurity in the World report, the Global Hunger Index of the International Food Policy Research Institute (IFPRI), and the Maplecroft Food Security Risk Index.

It is also interesting to see that the concern of food ‘insecurity’ is not based on right to food, or more ecologically and politically grounded notion such as food sovereignty. The major ground of concern the EIU report expressed is ‘political’ insecurity. It says ‘food insecurity also threatens political stability and lack of food is correlated with a substantial deterioration of democratic institutions in low-income countries, as well as a rise in communal violence, riots, human rights abuses and civil conflict’.

The Executive Summary of the report states "The world, on balance, is richer and better fed than it was 50 years ago, but those gains are under threat. The global population is growing, and is expected to reach 9bn by 2050. Consumers in emerging markets are wealthier, and are spending more of their income on meats and processed foods—driving up demand and straining supplies. High prices for oil and other agricultural inputs are making production more expensive".

The report also claims that "extreme weather increasingly threatens harvests, and agricultural productivity gains are waning as investment falters. Competing demands for crops add to the pressure. All of this suggests that high prices—and price volatility—will threaten global food security for at least the next decade."

As citizens, we should not take such report as innocent gesture to raise concerns on food security. We therefore should find who are sponsoring such studies and why? According to the report it is sponsored by DuPont, a multinational corporation which is interested in three aspects: affordability, availability and utilization. For DuPont common food security metrics are key to increasing global food security, as Chair and CEO Ellen Kullman of DuPont puts it, “we’ve always known that what gets measured, gets done”. DuPont commissioned the Global Food Security Index that was launched by the Economist Intelligence Unit (EIU). Question is why DuPont? According to DuPont Global website, “as we talked to governments, NGOs and farmer organizations around the world, we’ve come to realize that while we share a common goal of food security, we do not share a common language. To truly address the root cause of hunger, we must have a common path forward to tackle such pressing issues as food affordability, availability, nutritional quality and safety,” DuPont CEO says. According to her “literally billions are being invested to address food security, but until today, we had no comprehensive, global way to measure food security and the impact of investments and collaborations at the local level”.

DuPont is at present more concerned about malnutrition in Africa and therefore DuPont website foodsecurity.DuPont.com talks about (11 September, 2012) malnutrition but it has the title “DuPont’s commitment to Food Security in Africa”. It refers to a report by UNICEF that almost 20 million children under the age of five suffer from severe acute malnutrition, which is the cause of over one million deaths in children each year. To address this major global crisis, DuPont is working with UNICEF to feed malnourished children in countries like Sudan with “Ready-to-Eat Therapeutic Food”. This high-protein peanut-based paste does not require water and is delivered in a ready-to-use packet. Made with DuPont emulsifier technology that prevents oiling to provide a longer product shelf life, UNICEF has delivered ready-to-use food to hundreds of thousands of children in Sudan and other countries around the world. One can easily see that identifying a country as food insecure DuPont opens up opportunity to reach a market for their product. It is just a marketing exercise.

Dupont claims, emulsifiers ensure healthy, tasty and convenient food products with an attractive appearance. Produced from natural raw materials such as vegetable oils and fats, emulsifiers reduce the surface tension between oil/water/air interfaces.  This is of benefit in dressings to increase emulsion stability and in margarine to reduce spattering during frying. Emulsifiers can also act as crystal modifiers in liquid oil, destabilizing agents in aerated emulsions, or as starch complexing lipids that counter staling in cereal-based foods. Dupont-Danisco emulsifiers are often tailor-made to satisfy specific customer needs, and most are available with a kosher or halal certificate. New emulsifiers are continuously developed to help customers differentiate their products and improve their production efficiency (see Du Pont Food Innovation) .

Let’s now look at the background of DuPont. Those who work on biotechnology and are also monitoring global seed market, DuPont is among the first three top Seed Companies who control over 47% GM seed market. Having acquisitions with Pioneer Hi-Bred Intl. USA, Australia and a number countries, the annual sale of seeds was 3,300 million dollars in 2007, ranking second among the 10 top seed companies in the world (see Du Pont) (see gmwatch) .

Although E. I. DuPont de Nemours and Company (DuPont) is now known as global science and technology company and is largest Seed company, it is the second largest chemical manufacturer in the US. Chemicals provide the main focus of DuPont’s operations. According to the company’s annual report, it is the global leader in the sale and manufacturing of nylon and is the world’s largest manufacturer of titanium dioxide, elastane and fluropolymers. Since acquiring Pioneeer Hi-Bred in 1999, DuPont has become the world’s largest seed company, with sales of more than $1.9 billion in 2000 (see RAFI) . Dupont sells hybrid seeds principally for the global production of corn and soybeans, and thus directly competes with other hybrid seed suppliers. DuPont’s Agriculture & Nutrition segment also provides crop protection chemicals. In addition, the segment provides soya based food ingredients and food safety equipment in competition with other major grain and food processors (see Du Pont E I Nemours& Company ) .

The history of DuPont shows that it is one of the war and weapon companies. Founded by E.I. Dupont as an explosives manufacturer by opening his first gun powder mill on the Brandywine River on July 19, 1802 DuPont powder had earned a good reputation among sportsmen and the company had become the leading powder supplier to the U.S. government.The company became the world's largest supplier of gunpowder in World War I. According to Corporate Watch, World War 2 brought even more profits for DuPont ( see Corporate Watch) . Over the course of the war the company produced 4.5 billion pounds of military explosives. The company was also heavily involved in weapons research, making major contributions to the development of plastic and other forms of explosives, gun and rocket propellants, and chemical warfare. From 1941 -1945 DuPont contributed to the top secret Manhattan Project that was to produce the bombs that devastated Hiroshima and Nagasaki. The company was also the principal mass producer of plutonium in the US, having designed, built and operated the world’s first plutonium production plant, the Hanford plant in Washington, at the request of the federal government. During the war DuPont managed a total of 25 US government plants, manufacturing mainly explosives, methanol, ammonia and neoprene rubber. DuPont profited immensely from the war, emerging from the fighting with a cash fund exceeding $196 million (see Industry and Ideology) .

DuPont is now a leading global company with reported revenues of $38 billion, up from 20% from a year ago, and net income of $3.5 billion in 2011. From gun powder for War to food and nutrition for political security and for profit is certainly not a good news for the farmers and people in the third world. In the words of CEO of DuPont “We delivered exceptional full-year results in 2011 despite significant market headwinds late in the year,” said DuPont Chair & CEO Ellen Kullman. “Our market-driven science continues to meet customer needs in food, energy and protection. Acquisitions in Nutrition & Health and Industrial Biosciences, coupled with robust and disciplined productivity efforts across our businesses, contributed to our successful performance. We remain well-positioned to serve customers and innovate as key markets rebound and global population growth drives new opportunities.”

Do we really need a weapon producer to solve our food security problem? Is it not synonymous of killing by gun powder and killing by biotechnology?