“Approval” story of Bt Brinjal: Continuation from India to Bangladesh 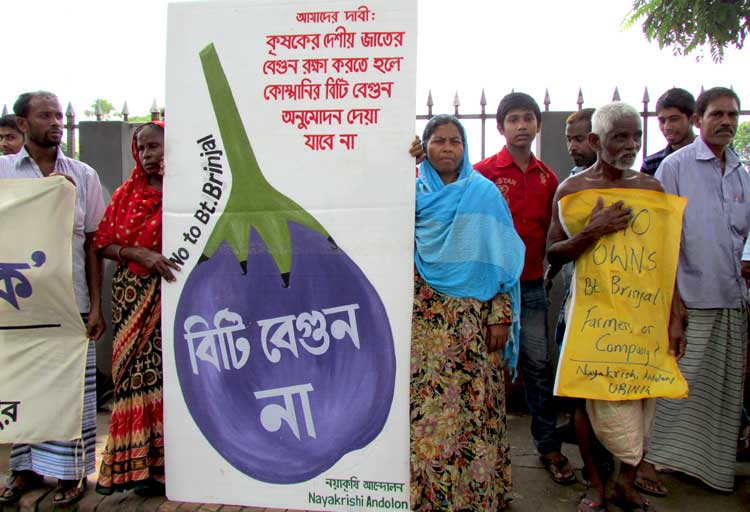 Bt. Brinjal, (also known as eggplant or aubergine), a genetically modified food crop, inserted with a gene from the soil bacterium Bacillus thuringiensis has been approved by the National Committee on Biosafety (NCB) in Bangladesh for limited scale cultivation by farmers. In a notification (in bangla) of October 30, 2013 bearing a reference No.22.00.0000.073.05.003.2012-271 the Environment Section-2 of the Ministry of Environment and Forestry provisionally approved the petition of BARI to cultivate Bt Begun varieties 1,2,3 and 4 in a limited scale at the field level by following seven conditions:

1. BARI Bt. Brinjal 1, 2, 3 & 4 can be released for cultivation on a limited scale according to the specific work plan proposed and recommended by Bangladesh Agricultural Research Council and Ministry of Agriculture;

3. In order to ensure monitoring of Biosafety Measures in the places with limited cultivation BARI must form a Field Level Biosafety Committee with the local Agricultural Extension officer, the Scientific officer of BARI experimental centre, the district or divisional officer of Environment Directorate and the Upazilla Administrative officer and submit to NCB;

5. In case of risks of health and environment are created, the applicant institution and the relevant Ministry must take immediate action and implement the necessary plan, so that the risks can be prevented from spreading and can be remedied. The applicant organization must bear the responsibility of the potential environmental risks or situation under the Biosafety Rules;

6. The applicant organization must take effective measures for labeling so that Bt Brinjal can be marketed as per Biosafety Rules; and

7. A monthly report with detailed description on Biosafety measures in the areas of limited cultivation should be submitted to NCB and BCC for publication in Biosafety Clearing House as per requirement of Cartagena Protocol on Biosafety to CBD.

The above conditions prove that Bangladesh is not yet prepared for commercial release of bt-brinjal. The country does not have appropriate and adequate mechanism to prevent and handle the risk of GMO crops. The nature of the whole approval process with series of restrictions is simply hypocritical because it is very much likely that the “limited scale” approval will be used as approval for commercial release and therefore the Ministry of Environment & Forest does not take any responsibility of the highly risky endeavour of Bt brinjal commercialization. It is unfortunate that the promoters of GM crops can take advantage of the weak regulatory mechanism of biosafety in Bangladesh.

This apprehension comes from the desperate efforts of the company Monsanto-Mahyco who have started the research in three countries (Bangladesh, India and the Philippines) on this very important vegetable, Brinjal. In India the first agreement to develop Bt Brinjal was signed in 2005 between India’s leading seed company-Maharashtra Hybrid Seeds Company, (in short Mahyco, a subsidiary of Monsanto, USA), and two agricultural universities-University of Agricultural Sciences (UAS) in Dharwad and Tamil Nadu Agricultural University (TNAU) in Coimbatore. An expert committee (EC-I) was set up in 2006 to examine the biosafety data presented by Mahyco which recommended that large scale trials be allowed to go ahead. In 2009, a second expert committee (EC-II) examined the data from these trials and tabled the recommendation for commercialization on 14 October, 2009. However, on 15 October, 2009 the State Minister of Ministry of Environment and Forest, Jairam Ramesh intervened to stop the approval process because of the nationwide criticism of the EC-II and the apparent haste with which the Genetic Engineering Appraisal Committee (GEAC) gave its consent.

Coincidentally, in Bangladesh also it was the month of October (2013), when the National Committee on Biosafety (NCB) under Ministry of Environment & Forest (MOEF) gave approval as recommended by the National Technical Committee on Crop Biotechnology (NTCCB) under Ministry of Agriculture. The NCB gave the approval letter on 30th October, 2013 after receiving the request for recommendation on 20th October to give its views by 22nd October. Only three days! So the haste was there in the case of Bangladesh as well. As the government was going into its poll-time period, both the Minister of Agriculture Matia Chowdhury and Minister of Environment and Forest Dr. Hasan Mahmud were not sure about the continuity of their portfolio, so it was apparent that they had to give approval not on the basis of “scientific” arguments, but on political decision. In fact, it was just to make Indian counterpart happy disregarding all the protests, outcry and writ petitions within Bangladesh as well as concerns expressed directly to the Prime Minister Sheikh Hasina by international scientists and a lot of press reporting on the negative impact of the introduction of GMOs.

In India, after nation-wide consultation with farmers groups and environmentalists Jairam Ramesh declared a moratorium on 9 February 2010 (after 3 months) on the commercial approval of Bt. Brinjal, citing the need for further safety testing. Now they have an indefinite moratorium. In such a situation, Bangladesh has given its approval! So the argument that Bt Brinjal is safe does not stand as Bangladesh research did not prove any better results than that prevailed in 2009 for India. The Hindu (Business Line) wrote on October 29 (2013), “Even as the Supreme Court is hearing a petition on allowing even field-trials of genetically modified (GM) food crops in the country, neighboring Bangladesh is set to allow farmers grow transgenic Bt brinjal. Ironically, the Bt brinjal varieties approved for commercial cultivation by Bangladesh’s National Committee on Biosafety (NCB) are based on technology developed and transferred by Maharashtra Hybrid Seeds Company Pvt Ltd (Mahyco). Commercialization of Bt brinjal in India was halted by a ‘moratorium’ imposed by former Environment Minister Jairam Ramesh..... It is Indian technology that has seen the light of the day in Bangladesh,” said Bhagirath Chowdhary, India representative of the GM lobby group, International Service for Acquisition of Agri-biotech Applications or ISAAA.”

In the Philippines, a group of scientists, farmers, and concerned individuals filed a writ petition in the Supreme Court, the Writ of Kalikasan, to stop the government from introducing genetically engineered eggplants, Bt Talong to Philippine soil, citing health and environmental hazards. On May 17, 2013 the Court ruled “[F]ield trials of bt talong could not be declared by this Court as safe to human health and to our ecology, with full scientific certainty, it being an alteration of an otherwise natural state of affairs in our ecology.” On 20 September, 2013 the Court of Appeals (CA) has upheld the earlier ruling, denying the motion for reconsideration filed by the respondents seeking to reverse its ruling to stopping field testing for the plants, thus preventing the government from conducting field testing of genetically modified, pest-resistant Bacillus thuringiensis (Bt) talong (eggplant). The CA said the writ of Kalikasan and continuing writ of mandamus it had issued in favor of the petitioners were "justified and warranted. [Asian Peasant Coalition, 27 September, 2013]"

Bangladesh government, particularly the Ministry of Agriculture, Ministry of Environment and Forest and the Prime Minister’s office were all made aware of this by the concerned groups within the country and abroad. Top independent scientists wrote to the Prime Minister to stop approval expressing concern over health and environmental safety. Even after approval, there is an International Civil Society Statement of Concern on the Commercialization of Bt Brinjal sent to the Prime Minister, President and the Opposition Leader. The statement said, “This is the same Mahyco-Monsanto Bt brinjal that was stopped in India, and its history there is highly relevant. The self-assessed dossier submitted by Mahyco-Monsanto was subjected to a comprehensive appraisal by several leading international scientists who examined the raw data. They found that biosafety studies, which were claimed to have been conducted, were essentially not done. The international appraisal of the raw data was only made possible when the dossier was forced into the public domain by an Order of the Supreme Court of India. We are concerned that the same dossier may have been submitted to Bangladesh for approval, when it has been shown in India to be essentially fraudulent”. This statement is signed by 100 non-governmental organizations, farmers’ organizations, consumer groups, and independent scientific organizations from different parts of the world including Third World Network (TWN), Save Our Seeds, Germany, Pesticide Eco-Alternatives Center (PEAC), China, No! GMO Campaign, Japan, Navdanya, India, Millennium Institute, USA, Institute of Science in Society, United Kingdom, Greenpeace International, Friends of the Earth Costa Rica, FOODwatch, Australia, European Network to Keep Seeds GMO Free, Consumers’ Association of Penang (CAP), Malaysia, Centre for Sustainable Rural Development (SRD), Vietnam, Canadian Biotechnology Action Network (CBAN), Canada, African Centre for Biosafety, South Africa, etc. and many NGOs in Bangladesh.

They have requested the government 1. to adopt a precautionary approach and suspend the commercialization of Bt brinjal as directed by the Bangladesh High Court. 2. Release all information related to the development and testing of Bt brinjal and 3. Conduct meaningful and effective public consultation processes among the different stakeholders at the local and national levels, who will be affected by the possible release of Bt brinjal.

The government of Bangladesh, perhaps, is aware that such ‘approval’ was not justified on many grounds, particularly on the methodology of the research and the process followed for approving a GM crop. Moreover, it did not follow a transparent process and have maintained a strategy of keeping its mouth shut and not to respond to any enquiry for information, since the resistance against approval process started within the country and abroad.

The other stakeholders such as the agricultural produce export, mostly vegetables, in the European Union and Middle East is going to be affected by such move of introducing GM food crop. According to a report titled “$600m agri export at risk as government hurries to release GMO crops” [Financial Express, 2 December, 2013] it is feared that the move will put agricultural produce export with likely embargo by the importing nations specially in the EU and Middle East. Bangladesh exported agricultural produce worth $535 million in the financial year (2012-13) and the shipment will surpass $600 million in the current financial year (2013-14). According to an official in EPB, "If Bangladesh begins cultivating GMO crops like brinjal, potato and rice, the importing countries in EU could impose restrictions on Bangladeshi agro produce import, hampering country's exports,". On the other hand, Bangladesh Fruits, Vegetables and Allied Products Exporters Association (BFVAPEA) reported that the authority concerned did not consult with them before the release of GMO varieties. They expect that the government will take necessary initiatives so that country's agricultural exports would not be affected.

Not only the exporters, farmers, consumers and the retailers are not aware of such move by the government. The question is with the approval of the limited scale cultivation, is the government trying to produce seeds of Bt Brinjal? If so, it will pose a great danger to the farmers and consumers who will not know what they are producing and what they are eating. Brinjal is a very common vegetable consumed by majority of the population. So the risks are very high for the people in Bangladesh and even to the consumers in the neighboring country India and those in Europe and Middle East.

We urge to the government again to stop the introduction of GM food crops in Bangladesh.