Mahyco ‘owns’ Bt Brinjal, not BARI and never the farmers! 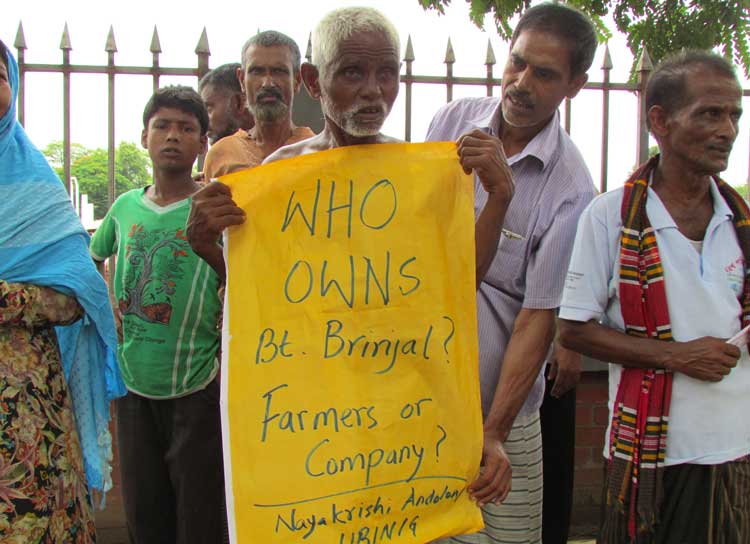 On October 30, 2013 Bangladesh National Committee on Bio-safety (NCB) approved the application of Bangladesh Agricultural Research Institute (BARI) for limited-scale cultivation and marketing of genetically modified eggplant, known as Bt Brinjal amid protests by environmental and farmers groups. The resistance against Bt Brinjal is increasing on issues related to serious threat to bio-safety and health. The authorities have failed to prove any agronomic value of the genetically engineered product and the claims are based on faulty methodology. The farmers are squarely resisting against patenting and explicit attempt of bio-piracy through technological manipulation. However, disregarding all these views, BARI claimed that Bt. brinjal has been developed in the public sector and will be distributed to the farmers by government agricultural institution. There are no technology fees or royalties payable on Bt brinjal by any farmer in Bangladesh because the technology to develop it has been donated free of charge. In their information in “Myths and Truths of Bt Brinjal” [http://btbrinjal.tumblr.com/myths], the Bangladesh Agricultural Research Institute (BARI) and International Programs of the College of Agriculture and Life Sciences at Cornell University (IP-CALS), they pretend to have complete control over the seed and the technology. At last the real truth has been revealed. In Bangla, the expression is “Tholer Biral ber hoye geche (the cat is out of the bag)”. It is unfortunate to see academic institutions like Cornell University, institutions belonging to NARC and USAID lying to the public on the IPR issue that is clearly a concern to the people of Bangladesh and particularly the farmers.

According to an agreement signed on March 14, 2005, ownership of the genetically engineered brinjal variety will go to Monsanto's Indian subsidiary, Mahyco, Maharashtra Hybrid Seed Company Ltd. (MHSCL). Mahyco is a subsidiary of US-based multinational seed company Monsanto and Sathguru Management Consultants Private Ltd. is the regional coordinator of the South Asian region for Agricultural Biotechnology Support Project II (ABSP II) of USAID. The Ministry of Agriculture (MoA) confirmed that IP (intellectual property) right of the Bt Brinjal is surely of Monsanto-Mahyco's. "The most striking point of the agreement is that it has given an indemnity or BARI has given indemnity to Monsanto-Mahyco and Sathguru for any kind of disaster concerning Bt Brinjal research." BARI has no right to even infuse Bt gene into a new variety [http://www.thefinancialexpress-bd.com/2014/02/23/20090].

Scientists in the Mahyco laboratory inserted bacterial gene in 9 Bangladeshi indigenous varieties of eggplant. Mahyco-Monsanto own the technology, the company did not transfer any technology and they are its proprietor. In fact, it seems that there is hardly any institutional transfer of knowledge and capacity and BARI’s role is exclusively to ensure marketing and to provide indemnity to the company from the potential disaster that the GMO can cause to Bangladesh. It is sad to see how national research institutions are reduced into the marketing wing of transnational corporations.

The truth is that through this agreement, which is signed without the knowledge of farmers and the general public, Mahyco & Monsanto now own the genetically engineered nine indigenous varieties of eggplants and Bangladeshi farmers does not, since the companies carry the proprietary technology they own. This is nothing but “bio-piracy”. This is also the reason why the question of using them as ‘free’ or ‘without charge’ could even be raised against Mahyco and BARI. It is outrageous to see that they are selling the seeds to the farmers who are real owners of these varieties. Varieties of eggplant seeds always belonged to farmers and farmers could collect those from neighbours or from other farmers when they needed. No one claimed any ownership over the varieties. Farmers could also collect them from local hats or markets, where any farmer could sell seeds. There is no one to claim IPR or to say I am allowing you to use my seed ‘without any fee or charge’. The community seed system of the farmer has ensured the availability of seeds and therefore the agricultural production. Farmer seed system is the foundation and without which, regeneration of agriculture is impossible. The transnational companies are out to destroy the farmer seed system in order to create the corporate seed market. The revealed agreement between Mahyco, Sathguru and BARI shows that the Bt Brinjal is a gross violation of peoples’ sovereignty over natural resources. The Tripartite agreement signed by Mahyco, Sathguru Management Consultants Private Ltd. (India) and Bangladesh Agriculture Research Institute (BARI) in 2005 for the development and release of cultivable Bt Brinjal varieties in Bangladesh clearly states that Monsanto-Mahyco preserves all the intellectual property rights (IPR) of the technology.

Section 1.19 of the tripartite agreement, said all Bt Gene is a Monsanto or Mahyco technology and the intellectual property rights of the concerned will be infringed by unauthorised distribution of products containing Bt Gene.

Sub-section (c) of Section 9.2 of the deal noted that it can be terminated by the sub-licensor or Mahyco if the laws and regulations in Bangladesh do not provide assurance of protection for commercial and intellectual property rights. [http://unbconnect.com/bt-brinjal/#&panel1-1]

It is a deceit on the part of the government to farmers that they have developed Bt Brinjal to help farmers reduce pesticide use for Fruit and Shoot Borer (FSB) infestation. It was incorrect from the beginning. First of all, FSB was never a major issue to the farmer, rather the issue was the marketing of eggplants and ensuring fair price to the farmers. Bangladesh is already producing enough of eggplants. Secondly, FSB can be easily dealt with Nayakrishi method or biodiversity-based eco systemic approach to cultivation and the mainstream Integrated Pest Management (IPM) techniques that can easily prevent or deal FSB. Also, Brinjals are not only attacked by FSB alone. Brinjal or eggplant is affected by different pest infestation, FSB is one of them. Scientists at BARI say 'Bt. Brinjal' claim will help resist pest attacks and relieve farmers of insecticides and fungicides uses. This appears as if the scientists are trying to save people from the harmful effects of pesticides. However, what they are hiding is that Bt Brinjal or any other Bt crops will not solve the problem rather aggravate it because it will be a crop that is toxic itself. It is like eating the pesticide directly, not the sprayed ones. In return, the government is allowing a multinational corporation to bio-pirate local brinjal varieties of Bangladesh and taking enormous risk of bio-pollution. The government is literally imposing the farmers to trade off their local varieties for controlling FSB infestation. 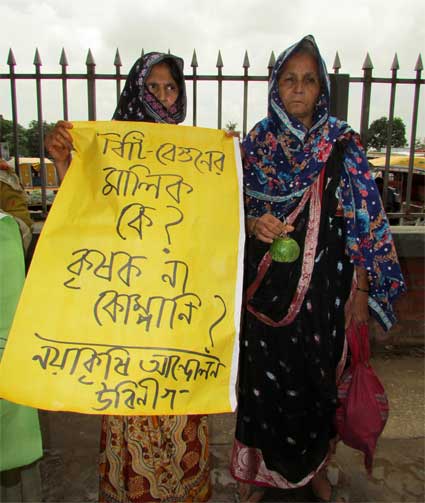 Bio-piracy, a term originally coined by ecological movements, refers to the appropriation of the knowledge and genetic resources of farming and indigenous communities by individuals or institutions that seek exclusive monopoly control (patents or intellectual property) over these resources and knowledge. Intellectual Property Rights (IPR) or patents are used to legally control the commercial market of the seeds. Monsanto, originally a chemical company that now defines itself as a seed and biotech trait company, provides easy-to-find figures on their seed revenues. Monsanto's seed revenues are inflated compared to other seed companies because the company includes trait royalties that are actually paid by other companies. According to the seed revenue figures of 2006, the top 10 companies account for $12,559 million - or 64% of the total proprietary seed market. Among them, the top 3 companies are Monsanto, Dupont and Syngenta which account for $8,552 million or 44% of the total proprietary seed market. [http://www.etcgroup.org/content/top-ten-seed-companies-2007] In 1996 – just 10 years back - the top 10 seed companies accounted for 37% of the worldwide market - and Monsanto did not even appear on the list because it did not have the proprietary seeds. By 2006, Monsanto became the world's largest seed company - accounting for more than one-fifth of the global proprietary seed market.

The commercial interest of the multinational companies is very clear in the use of IPR. In Bangladesh, Monsanto did not have any entry into the seed market. Through IPR in Bt Brinjal, the company will be able to control a huge market in Bangladesh as well as in India. In the Monsanto website, [http://www.monsanto.com/products/pages/plant-traits-technologies.aspx] Bt Brinjal is not yet listed in the Agricultural seeds. The crops that are listed are Alfalfa: Genuity® Roundup Ready® Alfalfa, Canola: Genuity, Corn, Cotton, Sorghum, Soybeans, Sugarbeets, and Wheat. Monsanto provides the farmers to purchase its seeds with latest traits and technologies. So for Monsanto, “helping” farmers means selling its seeds with traits and technologies which they did not even ask for. Of the 2000 seed varieties in 18 different crop varieties sold in 160 countries, Bt Brinjal is not even there. That means Bangladesh is generously providing Monsanto a great opportunity to control the vegetable market with a very common and important vegetable, i.e. Brinjal (egg plant) consumed by millions of people in Asia at the cost of making its own people vulnerable to potential environmental and health hazards and to lose control over its own varieties.

Monsanto invests heavily in the university teachers and BARI scientists and runs a small office in Kakrail, Dhaka. It does not need a big show of office as it is quite comfortably running its business through government institutions and the Ministry of Agriculture.

Question can be raised whether BARI as a public institution has the right to enter into an agreement that violates the rights of the farmers and the national interest of its own people.