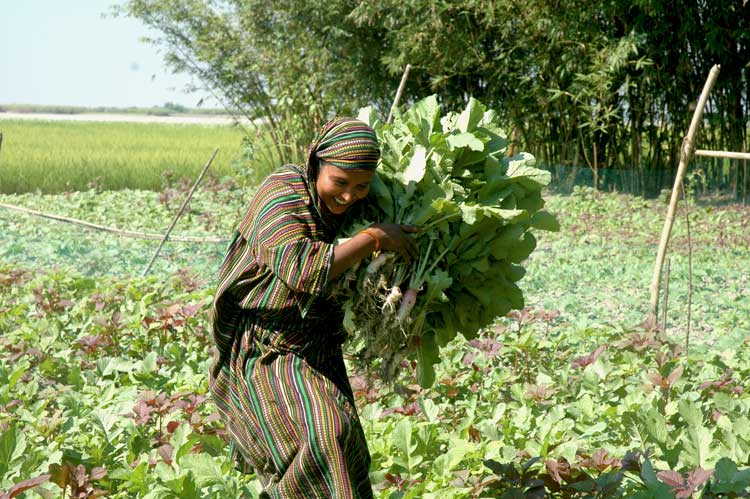 The Nayakrishi farmers at Rajendrapur and adjoining villages in Baraigram upazila of Natore district have been maintaining indigenous genetic resources. They have been maintaining the seeds of local varieties of crops in cultivation. The seeds are maintained on farm as well as in the Nayakrishi Seed Hut at community level. The Nayakrishi initiative aims to ensure the livelihood of the rural community through community based biodiversity management by safeguarding genetic resources and environment against the introduction of invasive genotypes, hazardous technologies and the climate change variations. This initiative ensures secured access of farming communities to nutritious food and increasing income through practicing Nayakrishi . 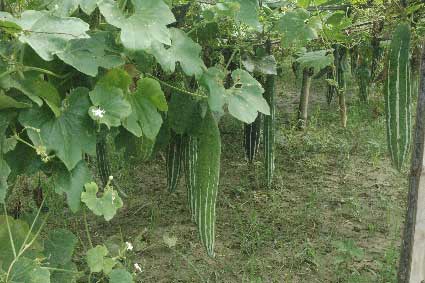 Rice has been a favorite item of food for the people of this locality. There were two rain-fed rice cultures including aus and aman traditionally. In the mid 1960s Boro rice cultivation with irrigation was introduced. Consequently the acreage and production of rainfed aus rice was declining gradually.

The farmers were organized into Nayakrishi. The farmers were oriented for conservation of biodiversity, production of crops based on seasons, preparation of crop calendar round the year and selections of seeds matching the environmental amplitude. The main challenges the groups faced were the lack of seeds of indigenous varieties of crops, breeds of livestock and poultry coupled with adaptation to climate change variations, stability of production across locations and quality attributes. 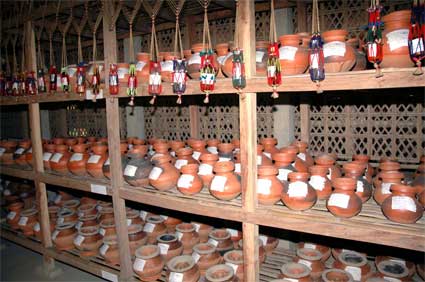 The women and men enjoy equal rights in the groups. The groups have been provided with seeds of indigenous varieties of crops and local breeds of livestock and poultry. In the meantime, the groups have seeds of many local varieties of crops. These seeds are used in large scale for crop production. The groups are sharing these seeds with their fellow neighbors. Consequently new farmers are introduced into CBM activities. 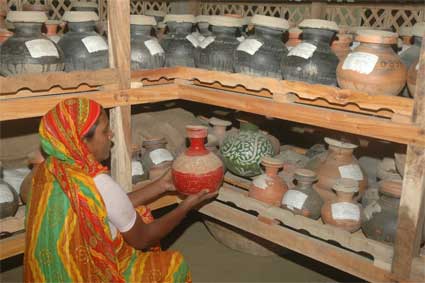 Activities to address the challenges:

Introduction of exotic seed was one of the main challenges before the CBM groups. Climate change variations coupled with other constraints in connection with climate change related uncomfortable situations for the CBM groups. In order to averting such challenges the CBM farmers resorted to collection and utilization of the seeds of the indigenous varieties of crops. They also encouraged others to follow the locally adapted technologies for cultivation.

The groups have accomplished significant improvement in the aspects including:

(1) Selection of varieties of vegetable tolerant to fog and cold, (2) Drought tolerant varieties of rice and vegetables, (3) Selection of flood tolerant varieties of rice, (4) Implementation of Nayakrishi, (5) Cultivation of vegetable in the homestead area (6) Increment of variability of seeds in the village (7) Collection, conservation and regeneration of the seeds, (8)Increased production of seeds, (9) Training of seed production farmers (10) Creation of awareness for growing mixed crops (11) Planning for production of seasonal vegetables, (12) Adoption of production practices matching climate change variation, (13) Use of indigenous knowledge of farmers (14) Use of mulching for conservation agriculture, (15) Increased stock of food grains (16) Increased production of cereals, (17) Establishment of plant nursery (18) Rearing indigenous breeds of livestock (19) Production of nutritious food crops (20) Proper use of homestead areas, (21) Increased exchange of seeds among the farmers and (22) Establish strong linkage of Seed Expert Committee with farmers.

Training program implemented for the farmers included (1)Seed management (2) Training for participatory variety selection, (3)Vulnerability assessment in connection with adaptation to climate change variation (4) Production of vegetables in the homestead area and (5) Economic progress and production of safe food following the community based Biodiversity approach.

Learning from the training 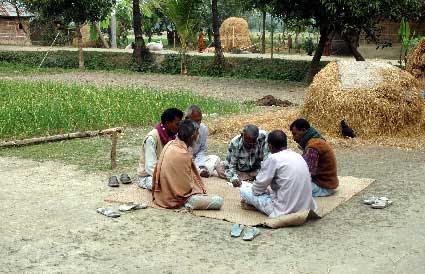 Contribution of knowledge orienting the perception of the target groups

The trained farmers had new vision and were empowered for management of resources for productive pursuits including:

The farmers had availed different training programs and accordingly they have earned confidence as Nayakrishi farmers (ecological farmers). They have the perception for conservation of biodiversity in order for ensuring food sovereignty through sustainable agriculture. They are storing food for future use in case of unforeseen natural calamities like drought, unusual rain, flood and fog. 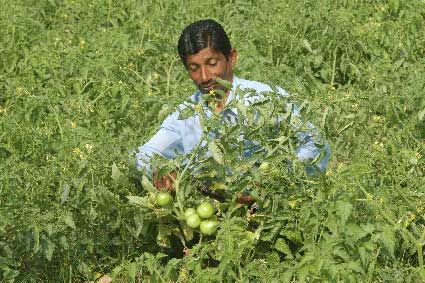 They are now producing more cereals for storage for future use. In addition they have been making more compost and storing in packets for use next season. They are logging the exotic species of trees for planting indigenous species of fruit bearing trees in the homestead area. The intensity of availability of uncultivated vegetables, fish in the open water bodies, medicinal herbs and other natural resources have increased in the locality.

The trained farmers have expressed their commitment for holding seeds of 10 species of crops and 3 species of livestock in each household. The farmers have been working relentlessly for keeping these objectives in view.

The farmers were happy to get higher return and diversified crops from the mixed cropping in place of previous single crop. This is because the cost of production in mixed culture is less compared with the pervious mono-crop. Moreover the soil is less disturbed and better managed in mixed culture. Due to increased cropping intensity there is greater employment opportunity for the wage earners in the community. Interaction and cooperation among different professions in the community have increased due to increased economic activities.

Implementation of activities in the locality have triggered some other dynamic activities including health, nutrition and health services. The supply of seed for cultivation of vegetables in the homestead area has ensured the supply of fresh and nutritious vegetables for the family members. The farmers are selling the surplus vegetables and thus improve the income earning potential of the family. 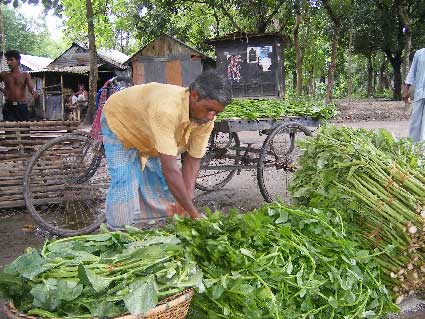 The families receiving the supply of cow from the project have improved economically. The members of the family have ensured supply of milk for consumption. The surplus quantity is also sold in the market for cash income.

The cow dung is also used for improvement of soil fertility.

Cow dung is also used for other diversified purposes.

The women members of the community were benefited through the distribution of hens from the project. In addition to aditional income to the recipient families of hens the maintenance of the indigenous breeds of chickens has been ensured.

The farmers in the CBM area increased their knowledge base. Now they have clear idea about what they have been doing .They hold the seeds in their own hands, save food grains in the stores, cattle and goats in the herd and increased cultivable land in the field.

Finally they have higher resilience against climatic hazards due to diversity of crops, livestock and poultry birds.

Now the farmers have become financially self contained. They have been selling the crops raised in the Nayakrishi principles. Fruits, vegetables produced in the homestead areas are sold in the market. The women have been selling chicken and eggs and earning about BDT 450 a month. The farmers in the target groups are able to earn BDT 5500 a month. The proportion of educated people in the community increased about 10%. In addition the availability of vegetables, fish, meat and pulse has increased about 5% per head. These indicate improvement of living standard of the people. Response of five farmers is given as follows:

We have regained the seeds of some local varieties of crops which were eroded from the locality. The seed support from CBM project has helped us diversifying our crops. Mixed cropping has increased including different crop combinations. Uncultivated vegetables are available in the locality in greater numbers.

We have diversified our cropping patterns involving some new crops. We have higher yield of crops and thus have financially benefited. Now we are maintaining seeds in our own hand. We are also sharing seeds with farmers in other villages.

I have received a local breed of cow from the CBM project. The cow has given birth to a calf. We are consuming the milk in the family and selling the surplus for cash income. I am also selling the cow dung. I hope to increase the number of cows in future and be rich financially. I appreciate CBM project for the cow and the dreams for a brighter future.

I have received four hens of naked neck breed. Twenty eggs were hatched and got 20 chicks. I have a dream to increase the number of chickens to 50. The market price of each of the matured hen/cock ranges from BDT 250-300. I hope to improve my economic condition through rearing of the local breed of chicken. This will also ensure the supply of nutritious food for the family members and also maintenance of local breed of chicken. 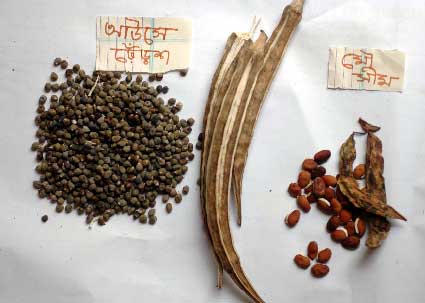 The initiative has achieved significant success in terms of re- introducing the seeds of the locally eroded indigenous varieties of crop seeds. The farmers are no more dependent on market supply of seeds. There is Seed Akhra in the village for supplying seeds if there is any shortage at farm level. In addition there is enriched increment of genetic resources including the following: Vegetables genetic resources have increased by 18 species including red amaranth, water gourd, bitter gourd, snake gourd, ridge gourd, sponge gourd, sweet gourd, Indian spinach, ash gourd, radish, spinach, okra, cucumber, string bean, little bitter gourd, brinjal, chili and tomato.

Cattle increased by three local breeds including pabna red, shahjadpuri and chand kopali. In addition there are two breeds of goat namely black bengal and ram chagol; one breed of duck (patihash) and one breed of pigeon.

There are some self expressed indicators for identification of the villages. The Nayakrishi farmers follow regularly the principles of mixed cropping, preparation of organic manure, indigenous breeds of livestock and poultry birds, indigenous species of fish in the ponds and other water bodies, local varieties of trees and other plants, local breeds of cow in the herd stack of hay near the cow shed, preservation of seeds of the local varieties of crops and cultivation of vegetables in the courtyard.

Being inspired by the examples of the Nayakrishi farmers, 23 households have grown vegetables in the homestead area and five households have been rearing the indigenous breeds of chickens .These farmers were supported from the Nayakrishi Seed Network (NSN) with seeds. The conventional farmers in the neighboring villages were impressed with the performance of the nine aus rice varieties in the Participatory Variety Selection of Aus Rice. They have requested the Nayakrishi farmers for seeds of the nine aus rice varieties for sowing next season. Forty new farmers have expressed their interest for joining the PVS of aus rice. 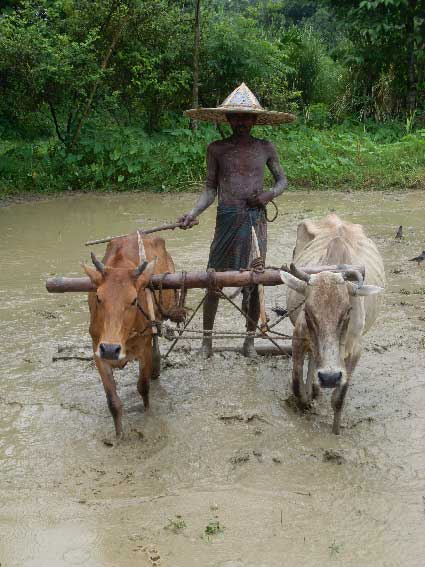 In addition, farmers and members of other professions have participated in the fairs, rally, human chain, farmers exchange program, press conference, Nayakrishi songs, and other events organized by the Nayakrishi. People of diverse backgrounds were informed of the principles and activities of the Nayakrishi.