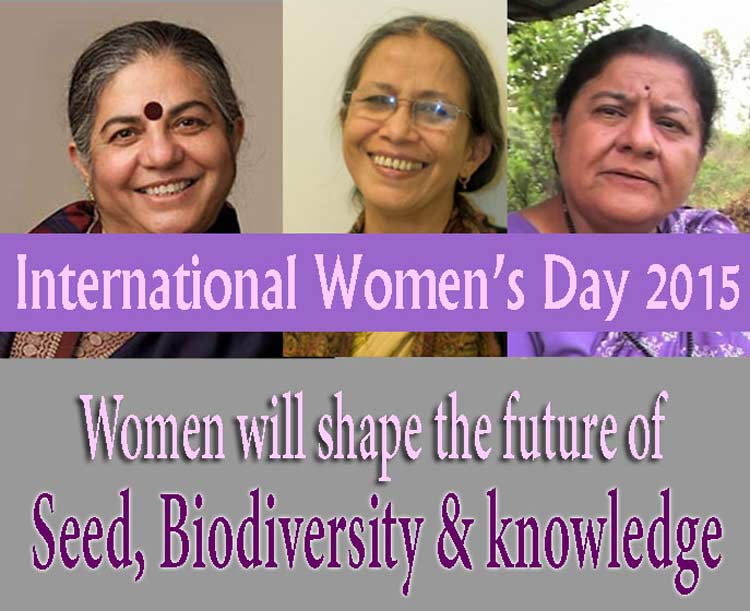 Women’s struggles against discrimination, inequality and violence is global and strong. However, women’s dis-empowerment is not an isolated consequence independent from colonial legacies and neo-liberal global arrangement of economic, political and cultural relations. From what is happening through corporate control over seeds, agriculture and food system, none better than women know well that women’s struggle is instantly and directly related to the question of biological survival and regeneration of the conditions of life. Women have historically been keeping seed , engaged in food production, ensuring nutrition for the family and the community; the history blatantly reveals this fact in the daily struggle of the rural women.

On the occasion of the International Women’s Day, 2015, women of world denounce corporate control over seeds and food system and commit themselves to reclaiming their seed, food, and knowledge sovereignty so that human beings can enjoy healthy, safe, nutritious, tasty and diverse food. It is humanity’s task to sustain all life forms. Dr. Vandana Shiva, Dr. Mira Shiva from India and Farida Akhter from Bangladesh have jointly released a statement on 8th March denouncing GM crops like Golden Rice, Bt. Brinjal and GM Bananas and assert that the alternative lies in women’s hands and minds. Here follows their statement:

BIODIVERSITY OR GMOS: WILL THE FUTURE OF NUTRITION BE IN WOMEN’S HANDS OR UNDER CORPORATE CONTROL?

Women have been the primary growers of food and nutrition throughout history, but today, food is being taken out of our hands and substituted for toxic commodities controlled by global corporations. Monoculture industrial farming has taken the quality, taste and nutrition out of our food. As a result, India is facing a nutritional crisis: every fourth Indian goes hungry, and in 2011 alone, diabetes took the lives of 1 million Indians. In Bangladesh, the food shortage is faced by 25.6% of population and 76% households sometimes eat less than three times a day. About 53.3% household cannot fulfill per capita energy requirement. Globally, there is a disease epidemic because our food is nutritionally empty but full of toxics.

Now, the same companies who created the crisis are promising a miracle solution: GMOs. Genetically engineered Golden Rice, Bt. Brinjal and GMO Bananas are being proposed as solutions by corporations hiding behind the cloak of philanthropy as a solution to hunger and malnutrition in the Global South. But these are false miracles. Indigenous biodiverse varieties of food grown by women provide far more nutrition than the commodities produced by industrial agriculture. Golden Rice is 350% less efficient in providing Vit A than the biodiversity alternatives that women grow. GMO ‘iron-rich’ Bananas have 3000% less iron than turmeric and 2000% less iron than amchur (mango powder).

Mansanto, Mahyco and BARI nexus have used nine of the most popular varieties of brinjal of Bangladesh. These are popular national varieties and are widely grown by farmers in different parts of Bangladesh.

In Bangladesh Golden Rice was first evolved by incorporating bita-carotene gene of daffodil flower into BRRI Dhan 29, a very common High Yielding Variety of Rice and was carried out for ten years and ended without any success. Later, the second Golden Rice was evolved by incorporation of bita-carotinoid from maize into BR29 Rice. Bangladesh has been selected as a laboratory for the trial. The innovators of the Golden Rice were not capable enough to give any evidence in favor of any positive gain of gene incorporation from maize to rice.

Apart from being nutritionally empty, GMOs are part of an industrial system of agriculture that is destroying the planet, depleting our water sources, increasing green houses gases, and driving farmers into debt and suicide through a greater dependence on chemical inputs. Moreover, these corporate-led industrial monocultures are destroying biodiversity, and we are losing access to the food systems that have sustained us throughout time. GM crops are aggravating the likelihood of elimination of vital beneficial bugs such as bees and butterflies. Honeybees continue to decline at a rate of 30 percent per year and butterfly populations have reached an all-time low. GM crops are perpetuating the widespread use of chemicals which started with the so-called Green Revolution and contributing to harm beneficial bugs and weeds.

When we consider the number of patents involved in these initiatives, it becomes all too clear that the only beneficiaries of these supposedly ‘people-led’ ventures are large companies operating for profit - not for people. The commercial interest of the multinational companies is very clear in the use of IPR. In Bangladesh, Monsanto did not have any entry into the seed market. Through IPR in nine Bt Brinjals, Monsanto will be able to control a huge market in Bangladesh as well as in India.

This needs to stop now. On this international women’s day, we call on all women – the world’s primary food-growers and food-givers – to stand together and join us in reclaiming our knowledge, our farming, and our food. To expose the lies generated by the GMO industry, to reject the false promises of Golden Rice, Bt Brinjal and GMO Bananas, and to reclaim the planet for all living beings. We have enough nutritional enriched food produced by our own farmers. Women possess the knowledge of nutrition from both cultivated and uncultivated sources of food in our region.

The alternative lies in women’s hands and minds.

On International Women’s Day 8th March 2015, we the women of India, Bangladesh and the world commit ourselves to reclaiming our seed, food, and knowledge sovereignty so that we can all enjoy healthy, safe, nutritious, tasty and diverse food. And through our food, we will reclaim our health and the health of the planet.

We will not allow a further degradation of our food systems and knowledge systems. We do not have to go down the road of replacing our biodiversity with GMO monocultures and our rich knowledge of food and nutrition with scientific and ethical fraud. We will not sacrifice our seed and food sovereignty for corporate control and profits.

We commit ourselves to

1 Promote and evolve the use of our indigenous seeds, crops and foods to address the crisis of malnutrition and health. http://seedfreedom.info

2 Spread gardens of hope, diversity and nutrition everywhere: in schools, on rooftops, on balconies.

5. Celebrate Mother Earth Day ,22nd April 2015 to liberate the Earth , our farms , our kitchens and our bodies from the burden of disease. Celebrate the connection between the health of the soil and the health of all beings on the planet during 2015 the United Nations’ ‘Year of Soil’

As women, in all our vibrant diversity, we will make a paradigm shift from monocultures to diversity, from chemicals to organic, from reductionist and mechanistic science to ecological knowledge, from corporate control and monopolies to seed sovereignty, food sovereignty and knowledge sovereignty in women’s hands and women’s minds. We will grow alternatives to the ecological and health disaster of industrial agriculture and its new false promises of Golden Rice, Bt Brinjal and GMO Bananas.

Organisations in India and Bangladesh