Turning Bt. Brinjal failure into a propaganda of success 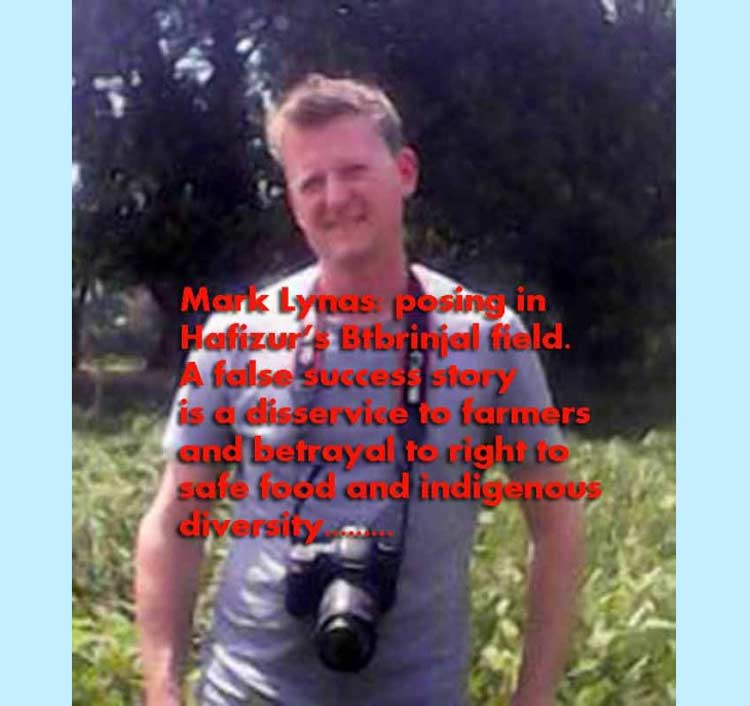 Since the beginning of the Bangladesh government clearance for field cultivation of GM food crop Bt. Brinjal, it has been a scandal. The genetically engineered crop failed miserably in the chosen farmers fields of Bangladesh, despite the careful selection and training of the farmers. Promoters of GMO adopted more scandalous options. They refused to review the experiment by the normative standard of strict scientific experiment and the international ethical standard of precautionery principle obligatory for potential hazards from GMOs. Instead the promoters took more aggressive attempts to carry out propaganda based on false claims. The article of Mark Lynas, introduced as a researcher at the Cornell Alliance for Science, published on April 24, 2015 in New York Times is a pathetic example.

The name of the article is essentially self promotional: 'How I got converted to G.M.O food’. The issue is not how some one got converted to GMO, but failure of field trial of Btbrinjal.  Sorry to say, we are not convinced that Mark Lynas was converted in a responsible and ethical course strictly abiding by the standard of science and the precaution  necessary for GMOs. People living in other parts of the world and who might be affected as producers and consumers is anothaer major concern.  Lynas's conversion to GMO makes no sense to the famers and consumers of Bangladesh as they have totally different experience. 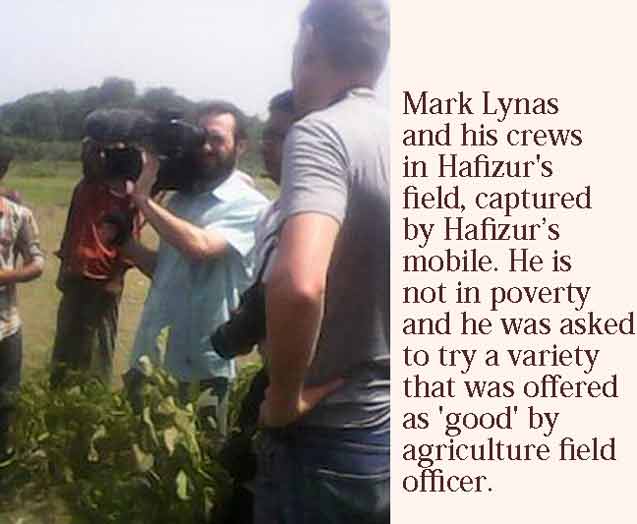 The article is fabricated , misleading and lacks evidence. Some responses to the article were published as letter to the Editor on 4 May, 2015. ANNA LEPPE of Small Planet Institute said “Mark Lynas profile of one farmer in Bangladesh does not represent the facts on the ground about genetically engineered eggplant there. The trials of the new variety of eggplant have actually had very poor results: Genetic engineering did not protect plants from most pests and have led to crop loss and debt for farmers”. Also she revealed that “Mr. Lynas’ Bangladesh visit was organized by the new Cornell Alliance for Science, funded by a $5.6 million grant from the Gates Foundation, that is promoting biotechnology, not dispassionately reviewing the science.”

So we can at best read Mr. Lynas’ claim as advertisement on behalf of the promoters of GMOs who are desperate to introduce genetically modified brinjals to assert technological and commercial control over a huge multi-million dollar local and international market. How Mr. Lynas tried to accomplish this task is interesting.

The 'drone camera' was used to photograph Hafizur's field. A close view of  brinjals in his field.

Mr. Lynas introduced the farmer as Mohammad Rahman (Mr. Rahman) without mentioning his first name, and did not mention the district he belongs to. There are millions of Rahmans; he avoided giving the first name so that his claims can not be objectively checked. It was Hafizur Rahman, not difficult to find out, since we are monitoring the field trial honestly and objectively despite our criticism of GMOs. Lynas mentioned the village name Krishnapur, not the district, which is 60 miles northwest of the capital Dhaka, known as Tangail. I am amazed at this strategy to hide the identity of the farmer, who according to Mr. Lynas ‘has earned profit by cultivating Bt. Brinjal’. If Bt. Brinjal is so successful why he does not want to give all the details of the farmer, so that every Bangladeshi journalist and even the Anti-GMO campaigners can visit him and gleefully get converted.

Hafizur is a young farmer-cum-technician cultivated Bt. Brinjal along with his brother Alhajuddin because he was given the seedlings. They were given to him as a ‘good’ crop. He is a Polytechnic graduate and a well off commercial vegetable farmer known to the Extension Officials of Agriculture department. They offered him training at Bangladesh Agriculture Research Institute (BARI). He did not need to uplift himself further out of poverty only through selling of Bt. Brinjal, as claimed by Mark Lynas ‘with increased profits’. To prove his point Mark Lynas depicted a bleak picture with his prejudiced western eyes seeing ‘shirtless kids’ in a summer season as a sign of poverty.

Mark Lynas did not visit those fields where Btbrinjal failed miserably.

Mark Lynas did not hesitate to make the same typical false claim as the promoters of Bt. Brinjal that ‘for the first time this season, he had been able to stop using pesticides’. In his 38 decimal land where he cultivated two varieties of Brinjals Kazla (Bt. Brinjal-2) and Nayantara (Bt. Brinjal-3); On the contrary, Hafizur prepared the field with bleaching powder for a week and then used chemical fertilizers such as Urea, Potash, Zipsum, Tri-super Phosphate (TSP) etc. He did not use any pesticide for the fruit and shoot borer (FSB) pest, but had to use pesticides against other pest attacks. FSB is not the only main pest; rather it is one of the many. Other pest attacks include insects, diseases and nematodes that inflict serious damage to brinjal crops causing heavy yield losses. Thus, Hafizur’s field was not free from pesticide use at all.

Hafizur Rahman is one of the 108 Bt. brinjal farmers who were ‘forced’ into cultivation of Bt. Brinjal without giving them proper information. Despite the fact that Rahman is an educated person he does not have any idea about the GM crops and about the health and other possible harms it might have. He sold the Bt. Brinjals with no labels. He was not even asked to label the GMOs. He sold Bt. Brinjal and ‘non-Bt. Brinjals’ together. People know about new brinjal as “Sarkari Begun’ meaning “government” brinjal.

Hafizur was not happy about how the Bt. Brinjal looks. It has rough surface and gets soft very quickly while the traditional variety is shiny and remains fresh for a longer time. At least 10% of Bt. Brinjal plants were virus attacked.

Hafizur Rahman could easily recall the Mark Lynas. He showed us the picture of American journalist, he took of him in his mobile phone, who brought a “helicopter drone camera’ to take picture of his Btbrinjal fields. He has the picture of that drone camera too. It was quite exciting for him to see that his field was being filmed with such ‘ultra-modern’ camera. He was also interviewed by other international media as well.

Mark Lynas would have seen different picture if he visited other areas such as Pabna, Meherpur, Manikganj etc. where farmers were also pushed to take Bt. Brinjal seedlings and did not get good results. Amjat Hossain a first round farmer in Pabna, declined the offer to grow Bt. Brinjal again, but his father-in-Law, Ukil Khan has grown this year. The crop condition appeared the same as it was in last season. There are more flowers but yield was very poor. The plants have burnt appearance. According to Amjat, the farmers will incur heavy loss this year also. Ukil uddin received fertilizer and pesticide from the agriculture office. He sold 40 kilos of Bt. Brinjal in the market at Tk. 10 per kilo from a land of 15 decimal. He could have earned Tk. 20,000 in the same field with onions. He wondered, “everyone says Bt. Brinjal (as fruit) does not have pest attack. If there is no fruit, then where the attack will be? ”

Extensive crop failures were found by journalists in Bangladesh in the newer areas in the second round. Bt brinjal strains were distributed to farmers and grown again in 2015; the crops failed yet again, even more dismally, according to the United News of Bangladesh, which sent a reporter to investigate. Reporter found that the plants have either “died out prematurely or fruited very insignificantly compared to local varieties”. Spot visits to 12 brinjal fields in the districts of Manikganj, Narsingdi and Comilla over the month of February to March 2015 found hardly any living or properly fruiting plants (see “Bt brinjal turns out to be ‘upset case’ for farmers”, New Age 21 March 2015 ). Reporting of false success of one farmer ignoring others will just backfire because people in the country are getting the real picture through their own reporting, observation and assessment. Farmers themselves are no more interested in getting losses every year.

Bt. Brinjal has failed in Bangladesh. An experiment may fail for many reasons. Nevertheless, the desperate attempt to get government permission to commercialise Bt. brinjal, after the failed starts in India and the Philippines, has forced Bangladesh to an extremely vulnerable edge. A coercive undemocratic government in power lacking legitimacy coupled with the alarmingly weak regulatory regime with regard to GMOs has put Bangladesh into serious risks of biological pollution and health hazards.