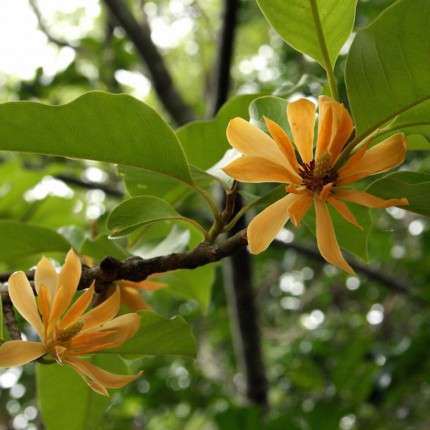 Magnolia champaca, known in English as champak, is a large evergreen tree, native to the Indomalaya ecozone (consisting of South Asia, Southeast Asia and some parts of China). It is best known for its strongly fragrant yellow or white flowers. It is, however, primarily cultivated for its timber, and is also used in urban landscaping.

Its aril-covered seeds are highly attractive to birds.

This species occurs in varying shades of cream to yellow-orange. In China, M. champaca var. pubinervia is documented. Magnolia × alba  is a hybrid cultivar of M. champaca. In Thailand, there has been some purported man-made hybrids with other magnolia species including Magnolia liliifera and Magnolia coco.

The flowers are used in Southeast Asia for several purposes. Especially in India, they are primarily used for worship at temples whether at home or out, and more generally worn in hair by girls and women as a means of beauty ornament as well as a natural perfume. Flowers are used to be floated in bowls of water to scent the room, as a fragrant decoration for bridal beds, and for garlands.

"Magnolia champaca however is more rare and has a strong perfume, and is not that commonly or plentifully used - for example in hair it is worn singly or as a small corsage but rarely as a whole garland, and for bridal beds it is most often jasmine and roses while for bowls of water to be placed around rooms usually other, more colourful for visual decoration and less strongly perfumed flowers are used."[8]