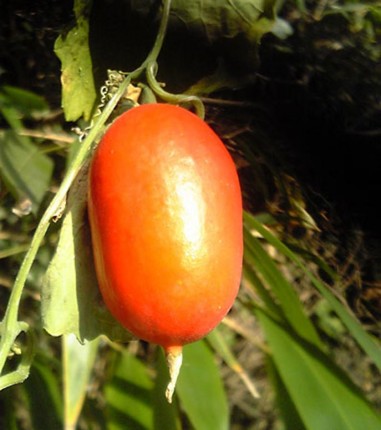 T. tricuspidata is considered to be medicinally important in several traditional systems. In ayurvedic medicines, the fruits are used in the treatment of asthma, earache and ozoena (intranasal crusting, atrophy and fetid odor). In the Unani system of medicine, the fruits are used as a carminative (an agent that relieves flatulence), a purgative, and an abortifacient, to lessen inflammation, cure migraines, and reduce heat of the brain, as a treatment for opthalmia (inflammation of the eye), leprosy (infectious disease caused by Mycobacterium leprae), epilepsy (episodic impairment or loss of consciousness, abnormal motor phenomenon) and rheumatism, (painful local inflammation of joints and muscles) as well as other uses. The seeds are emetic and a good purgative. In the Thai traditional system of medicine, the plant is used as an anti-fever remedy, a laxative, an anthelmintic as well as in migraine treatments . The roots of the plant are used to treat lung diseases in cattle and for the treatment of diabetic carbuncles and headaches . The plant is also used in curing bronchitis, and the application of seed paste for hoof and mouth disease in cattle.

The vaidyas, or practictioners of ayurveda, also use the fruits in treating stomatitis. The oil extracted from the roots is used as a pain killer.  The plant is also used for curing snakebite poisoning and the juice of the plant is applied externally for skin eruptions. In Nepal the roots are used to cure bleeding in chickens.

In Malaysia, the leaves of Trichosanthes tricuspidata Lour., orsan jian gua lou (Chinese), are reduced to a paste which is applied to boils. Indonesians drink the sap squeezed from the fresh leaves to stop diarrhea. The fruits are known to abound with a series of cucurbitacins, including tricuspidatin and 2-O-glucocucurbitacin J, which inhibit the survival of KB cells cultured in vitro. Such compounds probably explain the antitumor effects of extracts of Trichosanthes root tubers on HepA-H cells and HeLa cells reported by Dou and Li. Cucurbitane saponins are known to occur in the leaves and stems. [Medicinal