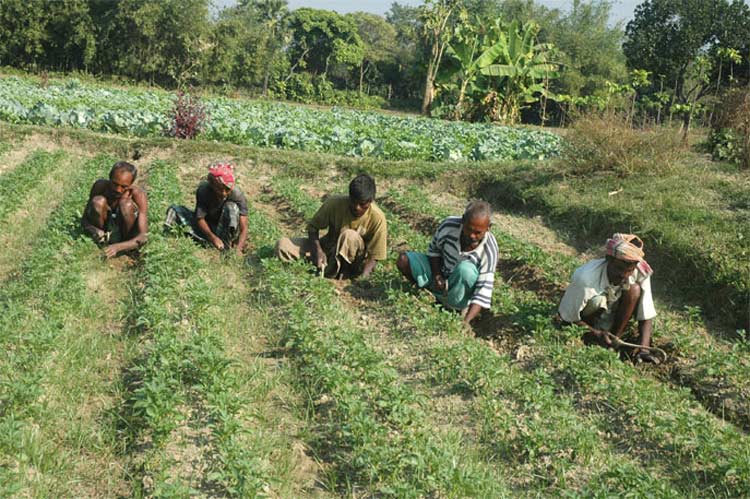 Acute shortage of required food crops has been prevailing in Bangladesh since long before. About 40 per cent of the population lives below the food consumption-based poverty line, lacking sufficient resources to afford diet of 2122 kilocalories (kcal) per person per day, along with other basic necessities ( Hossain et al. 2005). Apart from the prevailing deficit in total calories intake, the normal diet of Bangladeshi people is seriously imbalanced, with inadequate consumption of protein, fat, oil and vitamin and with more than 80 per cent of calories derived from cereals. Women and children are especially vulnerable to their greater nutritional requirements. In Bangladesh, more than 30 thousands children under 2 years of age are estimated to suffer from vitamin A deficiency related eye problems (Bloem et al. 1996). It is also reported that vitamin C, iron and other mineral nutritional deficiency are widespread resulting in different types of diseases, hampering physical growth and retarding brain development.

Considering the above facts, a huge amount of food crops are imported every year in exchange of our hard-earned foreign currency. Therefore, it is imperative to increase the productivity of diversified food crops. Due to decrease of arable land (1%) every year, horizontal expansion of crop production is not possible. To increase the productivity different possible techniques have to be followed of which most important technique is the multiple cropping. Multiple cropping systems can contribute to the beneficiaries as risk aversion against sole cropping systems and increase agricultural production. In multiple cropping, two or more crops are grown in the same field during the same year either simultaneously (intercropping) or in sequence (sequential cropping). The philosophy of multiple cropping is maximizing crop production per unit areas of land with minimum soil deterioration.

In recent years, multiple cropping has been gaining importance as a system of more crop production in limited land area particularly in the countries with small farm holdings like Bangladesh, India, China, Taiwan, Srilanka, Malaysia, Hongkong, Vietnum, Africa and Latin America (Beet, 1977). By the practice of multiple cropping, people can improve their socio-economic condition by attaining substantially by the maximum use of resources available to farmers (Day and Singh, 1981). Research studies have been shown that small land holders especially with limited land holder farmers can be benefited to optimize production from small plot through multiple cropping and thus help farmers to cope with land shortage. Perhaps the most attractive aspect of multiple cropping to producers is that these systems can boost to yields and increase profits resulting in a balanced diet for the farm family (Cramer, C. and Cicero, K.1992).

Multiple cropping is also practiced to obtain diversified types of crops, to increase the soil fertility and to sustain the farm profit (Mengping and Zhangjinsong, 2004). Due to the continuous population pressure, the increase in food production, especially, cereals have been given priority in Bangladesh. But due to the continuous production of cereals, the productivity of land is reduced due to nutrient mining. Legumes fix nitrogen from atmosphere and their seeds are also used as food by both human and livestock. So, incorporation of legumes into cereals has been tried to achieve increased food both for human and livestock and also for improved soil fertility (Nargis et at., 2004).

The objective of Nayakrishi is to extend bio-diversity based ecological agriculture among the farmers in Bangladesh. The Nayakrishi farmers will make best use of the local and traditional knowledge. They will grow crops with farm saved seeds. They will also abandon the use of pesticides/insecticides and gradually reduce the use of chemical fertilizer. The chemical fertilizer will be replaced by the use of compost and cow dung. Ultimately the environment will be better maintained including soil and water. The Nayakrishi farmers are cultivating different rabi crops either mixed or inter or relay crop combinations in their fields as a substitute of tobacco.